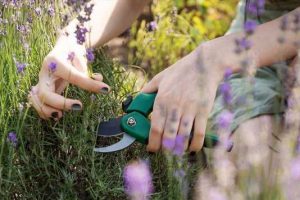 Matt James reveals how to pot a lavender plant in 2013

Lavenders are easy to grow, flower in late spring and summer and come in a plethora of hardy varieties. Lavender leaves and flowers can also be used for drying and can then be put in drawers to scent clothes. Despite being relatively easy to care for, lavenders can suffer from root rot and fungal infections.

Luckily, fans of cleaning sensation Mrs Hinch, whose full name is Sophie Hinchliffe, have shared their advice for grey lavenders.

The cleaning and lifestyle influencer has more than 4.5 million followers on Instagram and often shares her garden and home tips online.

Fans of hers have taken to social media in recent years to share their own hacks for solving common household problems.

On one such group, Facebook user Julie Burden asked: “French lavender. I have two trees which are turning grey.

“Google says it’s over-watered and to check roots, as they hardly need any water. But I’ve checked the roots (which look fine) and the soil is dry so definitely not soggy as expected. What could it be?”

The post was inundated with responses but the most common piece of advice was that this is “normal” for the plant at this time of year.

Carole Blackmur said: “Nothing wrong with it. Lavender turns grey this time of year, with a different level of sunlight. They will turn green later in the year, towards spring.”

Gillian Smith commented: “Normal for lavender – they like to be quite dry too.”

However, some experts claim a lavender turning grey could be a common sign of an unhappy plant.

Lavenders are prone to fungal infections which can eventually lead to the decline and eventual death of the plant.

One specific fungus that affects lavender is botrytis which thrives in moist conditions.

Lavenders with a fungal infection are usually infected from the lower leaves of the plant.

He said: “Fungal diseases are a fairly common reason why lavender plants start to turn grey. Often, the Botrytis fungus will be responsible. You should be able to spot the damage occurring at the base of the plant.”

He added: “If you think that fungal disease could be responsible for the lavender turning grey, you need to take prompt action. This will stop it from spreading throughout the garden and infecting other plants.”

Another reason why lavender might turn grey, especially around the base, is if the plant is overwatered.

If a plant has root rot, the plant will develop grey patches which will eventually turn brown and then black. The whole plant could die within a matter of weeks.

Signs of overwatering include the plant turning grey around the base of the stem, constantly soggy soil, a heavy pot and yellow, mushy leaves.

Not watering a lavender for a long period of time can lead to a grey plant.

Underwatering can lead to underdeveloped roots and dropping branches as well. Leaves will also turn yellow and dry.

To check whether the plant is underwatered, put a pencil or stick in the soil. If it is dry all the way through, the soil is dehydrated.

A pot that is too small can cramp the roots of the lavender while a too-large pot will make access to water and nutrients difficult.

A grey plant could be a sign that it hasn’t been pruned and deadheaded enough throughout the year.

Lavenders need pruning twice a year. If they are not the stem and foliage will turn grey.

In the long term, this could lead to a woody stem. Pruning plants is extremely important for their health.