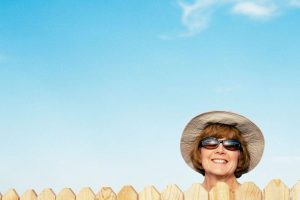 Who owns my garden fence? Boundary rules in England & Wales

For most homeowners with gardens, keeping their outside space private is a top priority – after all, you want to be able to enjoy sitting outside or tending to your plants in peace. But one mother has been left fighting to keep prying eyes away from her family’s garden, as she has a neighbour who seems determined to peer over their fence.

Sharing the story on Mumsnet, the anonymous mother explained her next-door neighbour is “overly friendly” and used to constantly strike up a conversation over the low garden wall, even when the mum and her family wanted some privacy.

To combat the issue, the family put a tall fence in place, but the woman remained determined and she claimed the neighbour has now purchased a trampoline just so that she can bounce higher than the newly constructed fencing.

The mother, who goes by the username LazyJayne wrote: “I have had issues with an overly friendly neighbour since we moved in.

“The original divider between our back gardens was a low hedge, and she would come out and talk to us every single time we were out in the garden. And boy, can she talk. She also used to lift her child over the hedge without asking to play with our child (who is years older and not interested).

“Eventually, we put up a six foot fence on our side of the hedge. I’d tried to warm her up to the idea of this beforehand by saying we were thinking of getting a dog and needed a fence to keep it in.

“When we put up the fence she initially made a few jokey comments about how it was harder to talk to us now, but she solved this problem by placing a step on her side and continued to pop up whenever we were out in the garden.

“My husband then planted bamboo along the fence which shot up over the summer and is now about 8ft. Last month, we saw from our bedroom window that a large trampoline had appeared in her garden. We assumed it was for her child and thought nothing of it. However, they don’t use it, she does.”

She added: “When I was out in the garden a few weeks ago, up she popped over the top of the bamboo, laughing hysterically, and shouting ‘see what I’ve had to resort to!’ I said something along the lines of ‘is that a trampoline for [her child]’ and she said it was originally but he wasn’t interested so she’s going to use it for exercise instead.

“So far all her exercises have coincided with us being out in the garden. We’re now back at square one and whenever we’re out she appears over the bamboo, laughing and shouting.

“My husband is very non-confrontational and says the bamboo will keep growing and eventually she won’t be able to see over it, but I think this will take years. We would also start losing light if we let it get that high.”

Those in the comments were quick to share their disbelief, with some suggesting the woman talk to her neighbour frankly about the uncomfortable situation.

One user commented: “No way! If this is true, you are going to have to bite the bullet and just tell her to back off.”

Another said: “With persistent people like this you need to be blunt. It’s the only way to get it across.”

A third commented: “Use your words. Tell her outright that when you’re in your garden you’re not looking for a conversation, that if you do want to have one you’ll invite her over, and to leave you alone otherwise.

“This is how we approached it with our irritating former neighbours who kept letting their children pester us and sure, they got the huff and said there was no need to be unkind; but as well as the huff they also got the point, and frankly that’s all I care about.”

Others said the mother should simply put in headphones, and ignore her to encourage her to stop.

A user said: “Headphones every time you are out in the garden and ignoring her because you can’t hear her. She’ll eventually give up.”

One commenter said their mother had dealt with a similar situation with their neighbour.

They said: “I think she might just be lonely, however it is annoying when you’re trying to relax in the garden and instead have to deal with talking to a neighbour.”