Home » Home and Garden » Prince Charles shares memories of bonding with Anne over gardening: ‘We had great fun’

Prince Charles shares memories of bonding with Anne over gardening: ‘We had great fun’ 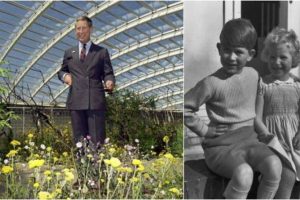 Prince Charles and Princess Anne were born just two years apart, in 1948 and 1950 respectively, and their love for the outdoors is what bonded them into their adulthood when they lived near each other in the Gloucestershire countryside. During an appearance on the BBC Radio 4 show ‘The Poet Laureate Has Gone to His Shed’ on Saturday, the Prince of Wales reminisced about how he and his younger sister spent a lot of their childhood in the garden.

Prince Charles told the show’s host Simon Armitage: “My sister and I had a little vegetable patch in the back of some border somewhere.

“We had great fun trying to grow tomatoes rather unsuccessfully and things like that.”

Charles did mention that they had the help of a “wonderful” head gardener at their London palace, called Mr Nutbeam.

Charles added: “He was splendid, and he helped us a bit, my sister and I with the little garden we had.”

The royal siblings were a duo for most of their childhood, for Prince Andrew was born almost a decade later in 1960 and Prince Edward four years after that in 1964.

He continued: “There’s nothing to beat, is there, I think eating what you have grown?

“This is another reason why I always feel it is so important to find ways of encouraging children to grow vegetables and things at school.”

Their childhood love of horticulture has stuck with the Prince of Wales to the present day.

Prince Charles has been an environmentalist for decades and is very outspoken about the devastating effects of climate change.

He told the BBC: “I don’t want to be confronted by my grandchildren and other people’s grandchildren saying, ‘Why didn’t you do something when you could?’”

The episode was recorded at Llwynywermod, the Welsh home of the Prince of Wales and the Duchess of Cornwall.

Prince Charles told Simon Armitage he was “very flattered, very touched you should even consider asking me on your show”.

In May, the royal announced he is in the process of converting Sandringham Estate into a “fully organic operation.”

The Prince of Wales took over running the estate from his late father Prince Philip in 2017.

Prince Charles explained in an interview with Country Life magazine: “At a global scale, it is becoming ever clearer to me that the very future of humanity may depend to a large extent on a mainstream transition to more sustainable farming practices, based on what are known as regenerative, agroecological principles, as well as innovative methods of agroforestry—something we are also putting into practice at Sandringham.”

The Prince has also been advocating for a charter called the Terra Carta that would ensure corporations include green initiatives in all future planning.

He has asked them to agree to almost 100 actions to become more sustainable by 2030.

Prince Charles and Camilla, Duchess of Cornwall were spotted on a royal walkabout yesterday in Ballater, Aberdeenshire carrying out royal engagements as the Duke and Duchess of Rothesay.

The couple unveiled a plaque for the opening of Ballater Community & Heritage Hub.

Princess Anne is reported to have visited the Queen at her Balmoral estate for the summer, and her main residence is in Gatcombe Park in Gloucestershire.

This is very nearby Prince Charles and Camilla’s Gloucestershire residence, Highgrove House.