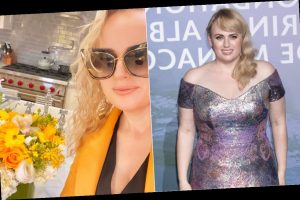 As Rebel Wilson celebrated her 41st birthday she was showered with gifts and flowers from her celebrity pals, and the actress took to Instagram to film how her $3million property was filled with fabulous birthday treats.

The Pitch Perfect star lives high in the Hollywood Hills, and it’s not often we get to see inside its walls, but her latest video was pretty much a tour of her luxury abode.

Her gorgeous kitchen was filled with bouquets of flowers, and Rebel confessed to the camera: “There’s so many it’s hard to count.” The blooms were displayed on the star’s giant marble-clad kitchen island, and the room also has a huge oven, pristine window shutters and chic white cupboards.

As Rebel moved from the cooking area through to the living room, followers could see a huge table had been set-up for a lavish birthday dinner with her nearest and dearest.

It wouldn’t take eagle-eyed fans to notice the enormous multi-tiered birthday cake in the corner of the living room and her spray of bright pink balloons.

MORE: Rebel’s idyllic home in the Hollywood Hills is the dream

The star’s home is very modern and chic

The actress then carried on filming as she walked into her spacious foyer, revealing double-height ceilings and chic wooden bannisters. A console table by the door, complete with mirror and orchid, had yet another delivery of flowers upon it.

Later, the party moved out to the backyard and Rebel posed with sparklers next to her idyllic outdoor pool. We know she likes to spend time here, particularly in the warmer months, as she has snapped a selfie in the pool before.

Rebel has a stunning backyard with huge pool

The large property boasts more than one living area, as the actress has previously unveiled a space with a chic grey couch, but the one in her most recent video was a distinctly larger room with minimalist white sofa.

Being based in the stunning Hollywood Hills, Rebel has been able to take advantage of the landscape and go on many local hikes during her “year of health” and beyond.