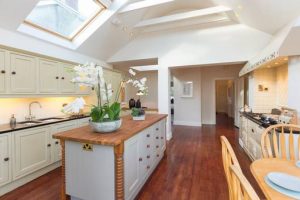 One of the oldest restaurants in Dublin, Beaufield Mews at Woodlands Avenue in Stillorgan, sadly closed its doors for the last time in October. Regulars were devastated when they heard the news, but owner Julie Cox said at the time that they wanted to go out on a high.

The Stillorgan institution served celebrities like Rock Hudson, Bono and Bjorn Borg over the years, and also hosted the weddings of thousands of Irish couples, including authors Marian Keyes and Joseph O’Connor. It was where Jack Charlton and the World Cup 90 Irish squad celebrated Liam Brady’s testimonial dinner, which must have been one of the highlights for head waiter Paddy Rice, who made sure all guests received a warm welcome in his 50 years at the restaurant.

Perhaps the owners of No 2 can’t bear the thoughts of life without Beaufield Mews on their doorstep, as they have just put their home up on the market.

Agent Rosa Egan says that interest in the property has been strong from the get-go, which is not surprising given its location in prime south Dublin land. It’s right off the N11, with Stillorgan Village just a few minutes away, UCD a five-minute drive and the 32-acre Deerpark in Mount Merrion only about 15 minutes on foot. The 1,539sq ft house is standing to attention and ready to greet its new owners, who’ll have little to do but unpack their belongings. Built in the 1930s, the property underwent a big renovation job before the current vendors bought it in 2006.

Behind the blue front door is an interior that mixes old and new. Period features like coving, cornicing, bay windows and fireplaces in the bedrooms have been restored out of respect for the property’s past, while the modern kitchen extension and attic conversion show us just how far these well-built homes can be taken to bring them in line with what we have come to expect from a family home in 2020.

The hall is floored in oak that runs through to the kitchen. To the right of the hall are two interconnecting reception rooms. At the front of the house is the living room with the bay window that has double sliding doors into a similar living space. Both rooms are carpeted and have fireplaces with gas fire insets.

The kitchen is at the back of the house in the new extension and is where one could imagine a family would spend most of their time. It is a bright room with four Velux windows and French doors out to the back garden. It’s fitted with cream country-style units with marble worktops. A custom-made island with a wooden top is the perfect companion to the large cream Aga that has two gas-fired ovens, one electric oven and gas hob.

At the other side of the room is another seating space that could easily fit a bigger dining table or a sofa or two.

The front room on the right-hand side of the hallway is currently being used as a bedroom, which would be ideal for an au pair as there is a guest WC beside it. Alternatively, as it already has built-in shelving, it would work well as a home office or even a kids’ playroom. Upstairs on the landing, there is a Stira that gives access to the converted attic space. This has been carpeted and has spot lighting and storage in the eaves. The two double bedrooms have built-in wardrobes and the original metal fireplaces. The third bedroom is a single, and the panelled bathroom has a bath with shower, underfloor heating and a heated towel rail. The front driveway has space for two to three cars and the rear garden is lawned with flowerbeds in raised sleepers to the sides and a shed at the back. There is a patio area just outside the kitchen.

The house is heated by gas-fired central heating and has an E1 BER.

Schools in the area are sure to be a big draw for interested parties, with Oatlands Primary School just a three-minute walk away. Teenage boys living on Woodlands Avenue will be delighted with the extra time in bed as Oatlands Secondary School is less that a minute on foot.

Mount Anville Girls’ Primary is 10 minutes away from the house, where the pupils can then feed on to the private secondary if they so wish, which is also within walking distance of the house. Blackrock College, St Andrew’s and Coláiste Eoin and Íosagáin are also close by, leaving residents on this road spoilt for choice when it comes to education.

Stillorgan Road is well-serviced by many bus routes in and out of the city, with the 46A and the Aircoach just two of the routes on offer. And in a city where a new restaurant is born almost every week, someone’s bound to take over the old Mews building and establish a brand new eaterie.

No 2 is on view tomorrow from 1pm-1.30pm through agents Sherry FitzGerald.