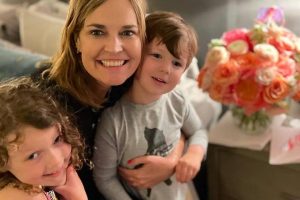 Savannah Guthrie is incredibly down to earth and her fans enjoy getting glimpses inside her family life on social media.

And the Today star baffled her fans in her latest Instagram post, as she shared photos of what she considered to be her “messy” living room.

The candid pictures had been taken by her young son Charles, but many didn’t think her home was anywhere near as messy as she thought.

In the caption, Savannah wrote: “Who took my phone and snapped 2000 pictures of my messy living room??? SWIPE. The culprit reveals himself.”

Comments soon followed, with one person writing: “What! That’s messy?!” while another wrote: “If that’s messy my living room needs therapy lol!” A third added: “If that is messy what does clean look like?” A fourth remarked: “That is not messy! Lived in but not messy.”

Savannah Guthrie’s fans did not see the mess she was talking about!

The TV favorite lives in a beautiful home in New York with her husband Michael Feldman and their children Vale and Charles.

During the pandemic, Savannah spent the majority of the time working from home and did so again during the school holidays so that she could spend maximum time with her kids.

Savannah is a doting mom to children Vale and Charles

Savannah adores her work, but motherhood is her number one priority. The star has been incredibly open about her parenting journey in the past, and revealed that her youngest child was their “medical miracle” after she went through several rounds of IVF to welcome him.

Savannah is a popular anchor on Today

“Because we are older,” she explained to Health magazine. “It was important to me for her [Vale] to have a sibling, somebody to do life with.

“My husband and I, we decided, ‘OK, let’s give it a shot,’ you know? But it ended up taking more than one attempt. It took a few,” she said. “But we were lucky. I always say, Charley was, like, the last egg out. He really was. And we’re so blessed.”