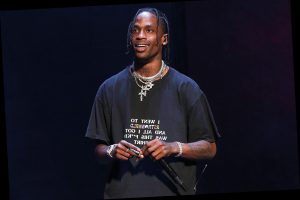 Travis Scott has a new place to call home!

Scott, 28, purchased an estate in Brentwood, California, earlier this month for $23.5 million, a real estate source confirms to PEOPLE. The spacious three-floor home boasts seven bedrooms and 11 bathrooms, as well as plenty of amenities, including a 15-seat theater, an outdoor kitchen, and a 20-car garage, according to Variety, which first reported the news of the sale.

"It was originally offered for $42 million in 2019 so he obviously got a great deal," the real estate source tells PEOPLE. "It's a spectacular property and the perfect combination of ultra-luxurious and family-friendly."

"It has amazing panoramic views of the ocean and all the way to downtown Los Angeles," the source adds, noting that the 10,000 sq. foot backyard also features a glass-tiled infinity pool, a Zen garden and a fruit orchard with 300 trees.

A real estate source confirmed to PEOPLE in April that Kylie, 22, bought a massive estate in the exclusive Los Angeles neighborhood of Holmby Hills. According to TMZ, the Keeping Up with the Kardashians star paid $36.5 million for the compound.

Back in 2018, Jenner and Scott, who share 2-year-old daughter Stormi, bought a $13.5 million mansion together and split the cost. It is not immediately clear if the pair, who decided to take a break from their relationship last October, still owns the property.

In recent months, Jenner and Scott — who continue to spend time together while co-parenting daughter Stormi — have sparked speculation that they’ve rekindled their romance.

However, although the pair were photographed leaving a Los Angeles restaurant together last week, a source told PEOPLE that they’re in no rush to get back together.

"Kylie and Travis get along. They enjoy hanging out with the same people. And they obviously spend a lot of time together with Stormi," the source said. "Being co-parents seems to be working out better for them than being in a romantic relationship."