Home » Home and Garden » Where will Prince Harry and Meghan Markle stay for the Jubilee?

Where will Prince Harry and Meghan Markle stay for the Jubilee? 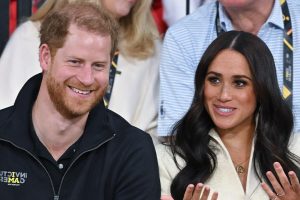 Prince Harry and his wife Meghan Markle may return to the UK for a special visit for the Queen‘s Platinum Jubilee in June.

To mark Her Majesty’s 70th year on the throne there will be an array of celebrations over the four-day Bank Holiday weekend in June. This will include Trooping the Colour in all its glory, unlike the pared-back versions we’ve seen in recent years.

WATCH: Prince Harry’s reaction when asked if he misses his brother

If the royal couple does make it across the pond, where will they stay?

While they have been invited to make an appearance on the Buckingham Palace balcony alongside the rest of the royals, it is unlikely that the palace will be their residence of choice.

Prince Harry and Meghan still lease Frogmore Cottage in Windsor which is where they lived with their son Archie when they were UK residents.

The beautiful home is currently occupied by Prince Harry’s cousin Princess Eugenie and her husband Jack Brooksbank, along with their son August.

However, with five bedrooms, there’s plenty of space for Harry and his family to stopover.

When the Queen’s grandson made the trip over for Prince Philip’s funeral he stayed there, which is why it seems reasonable for that to be an option once again.

INSIDE: Prince Harry and Meghan Markle’s favourite five-star hotels across the world

LOOK: See inside Forgmore Cottage where Princess Eugenie is living

Harry and Meghan did manage to pay the Queen a flying Easter visit on their way to the Invictus Games in the Netherlands, but Her Majesty is still yet to meet baby Lilibet, who is named after the monarch!

Trooping the Colour is a big family affair

Speaking to Today‘s Hoda Kotb from American network NBC, Harry did express his concerns over another UK trip though, which is why the jury is still out on his Jubilee attendance. “I don’t know yet, there’s lots of things – security issues and everything else. So this is what I’m trying to do, trying to make it possible that, you know, I can get my kids to meet her,” he revealed.