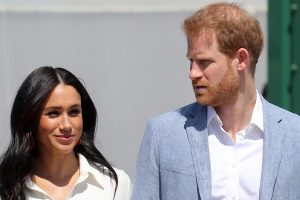 Prince Harry and Meghan Markle currently live in a £11.2million mansion in Montecito, California with their son Archie Harrison Mountbatten-Windsor, and as newlyweds the couple resided at Nottingham Cottage in the UK, but due to its size, it is extremely unlikely that they will ever live there again.

The two-bedroom cottage, which is located next door to Prince William and Kate Middleton‘s home, Apartment 1A, would be a bit too snug for Prince Harry and Meghan’s growing family, as they have a daughter due this year.

Nott Cott, as it is affectionately known among the royals, does hold lots of fond memories for the couple though. As well as being their first marital home, it was also where Harry proposed while the couple were cooking roast chicken.

The sweet cottage has previously been home to Prince Henry, Duke of Gloucester, and his wife, Princess Alice, as well as the Queen’s private secretary Robert Fellowes and his wife Lady Jane Fellowes. Prince William and Kate Middleton also lived there for a brief stint in 2013 with their newborn son Prince George, while their mansion Apartment 1A was being renovated.

Nottingham Cottage is located within the grounds of Kensington Palace

If Prince Harry and Meghan Markle did ever make a prolonged return to UK soil, it is likely that they would settle back into Frogmore Cottage. This was their first family home with Archie and they spent £2.4million renovating and redecorating the interiors to suit their family before opting to live overseas.

LOOK: See what it’s really like inside Frogmore Cottage

Inside the Grade II listed building it is reported that there are five bedrooms, a kitchen, a living room and a nursery.

When Prince Harry returned to the UK for his grandfather Prince Philip‘s funeral, he chose to isolate at his UK base of Frogmore Cottage.

Princess Eugenie and Jack Brooksbank are currently living at this property, along with their son August.