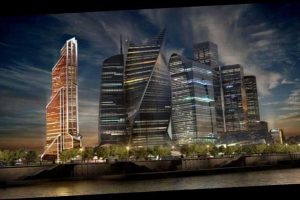 The $1 billion Mercury City Tower of Russia is one of a kind with some amazingly unique features. Today the structure stands out in all of its glory in the heart of Moscow. This building was developed under the Russian architect, Mikhail Posokhin, by the Russian team of engineers called Mosproject-2 in collaboration with American architect Frank Williams. Unfortunately, Frank Williams passed away in the middle of the project, and then the Russian team had to hire another Dutch architect, Erick van Egeraat, to finish the project. It occupies a massive area and comes in the form of a multi-purpose building with office spaces, residential areas, shopping complexes, and fitness centers, to name a few.

Since 2014 it has been the 4th tallest building in Moscow, the 5th tallest in Russia, and the 83rd tallest globally. However, its appearance and a range of impressive features are what make it stand out in all of Moscow. The budget prepared for this extraordinary project was at a minimum of $650 million and a maximum of $1 billion.

The following is a list of unique features of Russia’s $1 billion Mercury City Tower.

The building is multi-purpose, with about 75 floors in total. The initial first 40 floors are assigned to various offices, and the rest of the 35 stories are specially reserved for apartments.

3 Sustainable Building Of The Future

About 70 percent of the office spaces are made to have access to daylight so that electricity is not spent on artificial lighting. The building also collects and stores melting snow water to be put to use later. There is a regulated smart energy cycle to maintain a comfortable temperature and provide hot water.

2 The Most Attractive and Well-protected Building

One of the main features that make this superstructure extraordinary is the copper-colored cladding and the bronze-tinted reflective glass instead of the usual silver. The copper color makes the building look like it is always amid a sunset. It also seems quite marvelous at night because it has an impressive 2 million LEDs installed on the top floors to broadcast advertisements.

This is how the Mercury City Tower earns millions through ad revenues. This feature makes the Mercury Tower stand out from the rest. Besides the fascinating exteriors, this tower has been structured to be resistant to earthquakes up to a magnitude of 6.0. The fancy design adds to the level of reliability during natural disasters. It is also equipped with heat resistance.

The $1 billion Golden Tower of Moscow has about 29 elevators, out of which two have superspeed; it also has about three giant escalators. This has been arranged because it stations public spaces like offices, retail hoops, and private spaces like apartments. The plan was to provide separate access to the two fronts without causing any kind of interference or disturbance to the other.

So, one does not have to be worried about privacy. The two-bedroom apartments are for about $4,400 per month and cover an area of about 224 square meters. The rooms come with all the luxury amenities that one would look for in a penthouse. There is the master bedroom with a fantastic view of Moscow, a gigantic drawing-room, and fancy bathrooms.

The offices have conference rooms and separate cubicles for individual members. There are fitness centers equipped with all the high-tech and modern tools. The retail shops, garages, and parking spaces are situated on the ground floor of the building.

Thus, the Mercury City Tower of Russia is known as the Golden Tower, not just for its bronze and copper finish or mind-blowing design. This building’s value is also because of how well optimized it is in space, activity, and safety. The eco-friendly and sustainable features are a cherry on top.

READ NEXT: Why Russia’s Billion-Dollar Bridge Was Deemed A Vanity Project