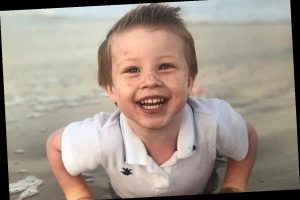 A 4-year-old Virginia boy marked the end of his cancer battle in a very special way this week — and his family couldn't be happier.

Nolan Turner has been battling lymphoma since September, but was finally able to put those days behind him on Wednesday as he celebrated being cancer-free by ringing the bell on his dad's firetruck, CBS affiliate WFMY reported.

Joined by his parents, Levin and Mandy Turner, as well as their family, friends, and hospital staffers, Nolan proudly wore a fire helmet as he rang the large silver bell outside of Children's Hospital of The King's Daughters in Norfolk.

"Crossing the finish line is a great feeling," Levin told the outlet of his son. "It’s just so amazing watching [him] overcome this adversity with a smile on his face." According to Levin, this wasn't the first time that his fire department showed support for his son.

Just two months ago, as Nolan was undergoing treatment, Levin’s colleagues from the Portsmouth and Norfolk fire departments surprised his 4-year-old by raising a ladder to his hospital room window and holding up signs to cheer him on, WFMY reported.

Their sweet gesture was an uplifting moment for Nolan, who was unable to have any visitors other than his parents while he went through treatment amid the ongoing coronavirus pandemic.

Because of how difficult the past year has been for their family, Mandy and Levin told WFMY that Wednesday's celebrations were even more special.

Added Levin: "I can’t thank the people that are here enough. Just how much their support and love mean to my family. It’s really the only thing that's kept us going through some of this process."

With his cancer officially behind him, Nolan — who is affectionately referred to as "Nolie-Olie" by his parents — is now looking forward to going home, spending time with his four siblings and one day, becoming a firefighter, WFMY reported.

The little boy will also have to attend regular check-ups with his doctors for a year to ensure his cancer has not returned, according to the outlet.

"He is a true fighter," his dad proudly told WFMY.