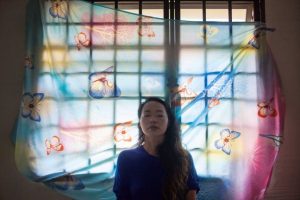 More than 150 home-grown artists will be displaying their works over the next three months in various locations across the civic district.

Titled Streets Of Hope, the collective presentation by local artists will be a colourful sight to behold at sites including St Andrew’s Road, Fullerton Road, Esplanade Drive and Stamford Road.

As part of the National Arts Council’s initiative under the #SGCultureAnywhere campaign, viewers can catch the collection online through the NAC Facebook page.

Check out this ST podcast with your kids to create art at home.

The gallery has launched its children’s festival #SmallBigDreamersAtHome (above) which runs till March 28 next year.

Hold a family game session of Snakes & Ladders, known as Parama Padam. Make the traditional game board at home with this Do-It-Yourself video guide. The online session is part of the Indian Heritage Centre’s series of videos on heritage games and crafts which will be aired this month and next.

Other games and activities on the playlist include the traditional art of Rangoli (above) – a vibrant floor mural traditionally arranged using rice powder dye, beans or seeds – and Pallanguzhi, a mancala (or count and capture) game played with a wooden board and shells. Players use arithmetic skills and strategic thinking to win all the shells on the board.

Explore the animal kingdom with kids using the e-resources on the Wildlife Reserves Singapore website.

The Animals We Love series offers interesting trivia about various creatures such as the mouse-deer (above) and the Komodo Dragon, both native to South-east Asia.

5. LEARN: The history of Japanese cuisine

Learn about the origins of Japanese cuisine, from vegetarian meals influenced by Buddhism in the Kofun period (from about 300 to 538 AD) to the four ingredients used to brew sake, introduced in the Nara period (710 to 794 AD). We would also like to hear from you, our readers, on how you are coping and keeping busy while at home. Please send us videos, pictures, stories, poems or other contributions at [email protected] or on ST’s Facebook and Instagram accounts. We will curate and showcase some of these, including at str.sg/stayhomeST

Spoiler: Legend has it that green tea was discovered when tea leaves fell into an emperor’s pot of hot water.

Go to: A Bitesize History of Japanese Food

With input from Ernest Luis