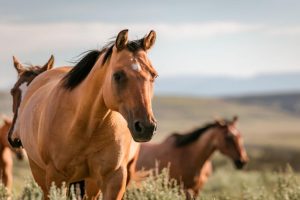 Owning a horse has always been an expensive hobby. There’s the cost of food per month, a place to keep it, apparel, training, and of course the cost of the horse itself. Although it does stand to state that there are over 2 million horse owners in the U.S.A alone. Horses are a large part of human history and the love for the gentle beasts is just as widespread in today’s age. Due to the expensive nature of owning a horse, it isn’t a surprise that horse riding is a beloved hobby of many celebrities.

There’s Johnny Depp who even gifted his former wife, Amber Heard, a horse in their courtship. Then there’s Kendal Jenner who bought her horse (or her) a 9k Hermes saddle to ride with. Or, Madonna who broke several bones, including a collarbone and a few ribs, while on a horse riding trip over 15 years ago. The love celebrities have for their horse friends often includes some of the best (and most expensive) horse breeds and thoroughbreds which can cost a hefty penny. Fusaichi Pegasus, the most expensive horse in the world, sold for 70 million after winning the 2000 Kentucky Derby. To find out more about the expensive lifestyle of horse owners check out 8 expensive horses owned by celebrities below.

Johnny Depp and Amber Heard had a tumultuous relationship that ended in a messy courtroom divorce which exposed the toxic relationship on live T.V. However, during their courtship, it was revealed that Johnny Depp gifted Amber Heard a horse so she could join him on trial rides. Although it was never disclosed what kind of horse was purchased, Johnny is known for buying movie horses after he’s worked with them. In the movie, “Sleepy Hollow” Depp rode a horse named Golden Eye, which he adopted at the end of the movie. Johnny Depp keeps his herd of horses on his 41-acre Kentucky farm which he paid $2 million for back in 2005.

Out of all the sisters in the Kardashian-Jenner clan, Kendall Jenner is arguably the most “outdoorsy”. Kendall has talked about her love for horses in multiple interviews and told The Cut in 2019, “for my whole entire life I would beg my parents to please get me a pony. I wasn’t just some little girl who was like, ‘I need a pony for no reason.’ It was my life. I ate, breathed, and slept horses. And I wanted one so bad”. The model has been photographed with countless horses but only owns two herself. It’s expected that Jenner paid a hefty penny for her all-white horse named Joe especially when he adorns it with a 9k Hermes saddle.

RELATED: 818 Tequila: How Kendall Jenner Is Growing Her Alcohol Brand

Maddona may be considered one of the biggest divas in Hollywood but she surprisingly likes to spend her free time at the barn. Madonna has often spoken of her love of horses and continues to speak highly of them even after a bad accident. In 2005 on her 47th birthday, Madonna was horseback riding and had a bad fall which resulted in three cracked ribs and a broken collarbone. The accident didn’t scare the popstar away and she got back into riding years later. A Portuguese newspaper reported in 2018 that Madonna had purchased some Portugueses horses for around €100,000.

Another model who has a love for horses is Bella Hadid. She even did her 73 Questions Interview with Vogue her mother Yolanda Hadid’s Pennsylvania farm. The model was an equestrian rider back in her youth and kept her love for horses throughout adulthood. Hadid currently hosts her horse Blue at her mother’s farm and visits as often as she can. Equestrian-trained horses can cost upwards of around $10,000 for the horse and monthly upkeep of $3000.

4  Her Majesty, The Queen

Her Majesty the Queen has been a horse lover and rider since her youth before she was given the title of Queen of England. Queen Elizabeth II is known for owning some expensive racehorses which have proved to be worth the investment. The Queen won a whopping $775,325 when her racehorse won a race in 2016 and has accumulated $9.3 million overall. While she’s owned some of the most expensive and prestigious horses to have lived she actually found the most love in a horse that was gifted to her. It is said that The Queen’s favorite horse to ride was a Canadian RCMP-trained thoroughbred horse from Saskatchewan that was gifted to her.

Kanye West adopted the rancher lifestyle when he moved to a 3,888-acre Wyoming ranch in 2019. While living in Wyoming, West decided to buy horses for his young children to ride while they visited. Kanye bought fourteen of the most expensive horse breeds, the Friesian horse, which sells for roughly $30,000 each. Two years later the rapper sold his estate for $11 million and it hasn’t been reported if the fourteen Friesian horses were sold with it.

MC Hammer ruled the early 1990s and it may come as a shock to learn the rapper/singer was an avid horse racing fan and owned a farm himself. The 90s sensation earned him a lot of money with his hit song “Hammer Time” and with that, he bought a farm he called the Oakland Stables. Over the years, MC Hammer owned 19 thoroughbred race horses and would let them race in some of the biggest racing events across the world. One horse, rightfully named Dance Floor, even won the Grade II Kentucky Jockey Club Stakes and the Breeders’ Futurity Stakes in 1991. Another MC Hammer horse named Lite Light won him $150,000 in a 1991 race at the Coaching Club American Oaks.

MC Hammer invested in race horses for the majority of his career owning 19 thoroughbred race horses along with a farm named Oakland Stables. One horse named Lite Light was a multiple Grade 1 stakes race winner.

Many actors become accustomed to working with horses and fall in love with their nature. Viggo Mortensen is one of these cases. Just like Johnny Depp, Mortensen is a huge horse lover and has adopted and bought horses from his movie sets. Mortensen became attached to two horses used during the shootings of the “Lord of the Rings” saga which he purchased at the end of filming. After his departure from “Lord of the Rings,” Viggo did a horse racing film called Hidalgo. Throughout the movie, Mortensen’s character rides a beautiful paint horse which he also purchased after filming commenced. Although the cost of the horses was never disclosed, training movie horses especially those with rare coat colors are always going to be in the thousands.

Celebrities might own some of the most beautiful and prestigious breeds of horses in the world but over 2 million horse owners in America share their love for the species. Humans have horses to thank for our survival throughout history and we definitely wouldn’t of advanced with technology so quickly if it wasn’t for their domestication.

READ NEXT: 10 Celebrities Who Spent Millions On Modifying Their Looks