9 Romantic Moments That Restored My Faith in Love in 2018

From glamorous, star-studded wedding ceremonies across the pond to the heartwarming proposals here at home, 2018 was packed with viral romantic moments. Every surprise kiss and epic proposal was important. Every cute one-liner and heart-eyes-emoji glance was also important. Especially when the news has been filled with bummers, it’s nice to be reminded that true love exists — and there are still people out there who show it in major ways.

Some grand gestures were just plain cool. Others had us in a Twitter uproar or reaching for napkin to dab our eyes or a combination of the three. More than anything, 2018 taught us: what makes a romantic moment perfect isn’t always going to be filled with chocolates, roses, and flashy diamond rings. Often times, it’s the memories, distinct shared experiences, and connection (despite all odds) between two people that make the romance special.

Here are nine moments from 2018 where the "aw!" could be heard for miles around. I’m warning you now: If you’re the type to tear up at cheesy Christmas movies, these stories might make you reach for the tissues. 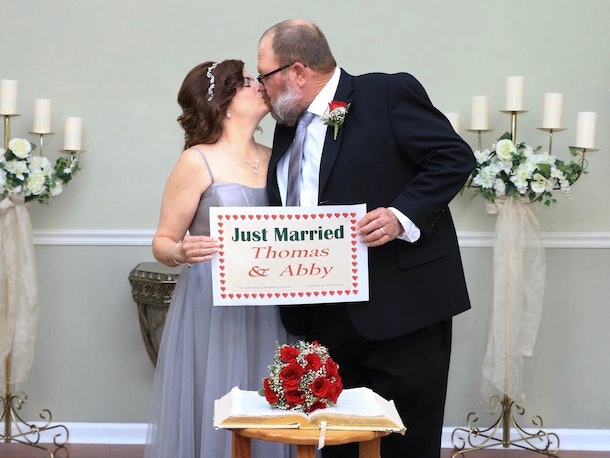 In the very first episode of Queer Eye, the world was introduced to Tom Jackson: a jorts-wearing, "redneck-margarita"-drinking sweetheart from Georgia. The main story is his Fab Five glow-up. But the juiciest thread is whether he’ll rekindle his romance with Abby Parr, ex-wife and love of his life.

In March 2018, just a month after his episode aired, Jackson announced his re-engagement to Parr on Twitter.

Parr and Jackson tied the knot in May.

March also brought us the queer coming-of-age film Love, Simon. The movie follows Simon Spier, a gay teenager who strikes up a digital friendship with an anonymous classmate. Love, Simon did draw mixed reactions from queer audiences. But everyone can agree that the romantic ending (and the support of Simon’s friends and family) were absolutely feel-good.

April brought us Thomas Pruim’s underwater proposal to his girlfriend, Christina Pilla. Pruim won a contest for a night aboard the MV Lucia submarine because he planned on proposing. Pilla is a marine biologist, so where better to declare his love than under the sea?

One of the most important parts of planning a proposal is the fairytale location. This is an excellent reminder that everyone’s fairytale looks different, and the best partners are the ones who appreciate and celebrate that.

We got to live our dreams through Meghan Markle and Royal Wedding fever. 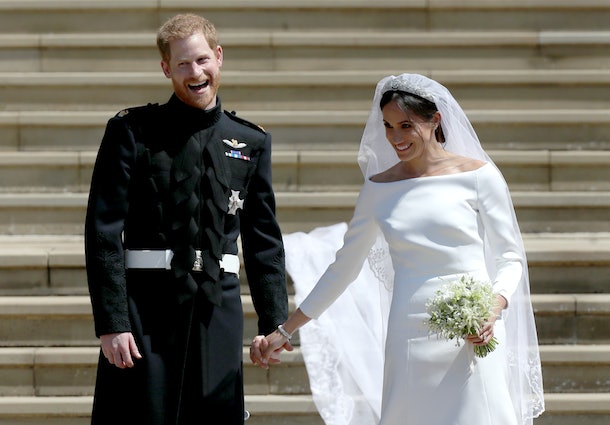 All of May felt electric leading up to Meghan Markle and Prince Harry’s wedding. And honey, did it deliver. Everyone from British royalty (like Victoria Beckham and Naomi Campbell) to American royalty (like Oprah Winfrey and George Clooney) served looks at the royal wedding.

The royal wedding also felt extra special because of what Markle brings to the table. She’s a half-black, divorced American marrying into the British royal family. Markle’s visibility as a mixed-race woman challenges the U.K. to be more progressive when it comes to race.

And just when we thought we could rest, the absolute cutest proposal happened in May. By pure chance, Jessa Gillaspie and Becky McCabe proposed to each other at pretty much the same time. Talk about being on the same wavelength.

‘To All the Boys I’ve Loved Before’ reminded us that it might take a couple tries, but eventually, you’ll get it right

August heated up quickly with Lara Jean Song Covey’s competing love interests in To All the Boys I’ve Loved Before. Rom-com fans were into an uproar. Lana Condor killed it as Lara Jean and Noah Centineo became the cinematic heartthrob of the year by playing Peter Kavinksy. What’s more is that the Covey sisterhood and Lara Jean’s romance with Peter feel so real.

If all the passionate TATBILB posts on your TL this summer didn’t confirm it, Netflix officially has: TATBILB was recently announced as Netflix’s most-watched original film ever, with a high repeat-viewing rate. And good news: TATBILB 2 is official.

Following the trend of romances that sweep us off our feet was Crazy Rich Asians. There are so many delicious plot points in this film, and so much to unpack about ethnic and class differences. Like TATBILB, Crazy Rich Asians was a prime example of excellent — if imperfect — Asian representation in Hollywood. It also broke records and snagged a Golden Globes nom, a milestone that rom-com dreams are made of.

Nick Young’s wholesome proposal to Rachel Chu is a breath of fresh air once you get to this scene in the movie. After all the trouble Rachel faces, oceans away from home, it’s a relief. Finally, something is going our girl’s way!

‘The Bachelor: Vietnam’ candidates showed us that you can find love in the most unexpected places.

People the world over take pleasure in the trials and tribulations of The Bachelor. A scene from The Bachelor: Vietnam went viral in September for a truly unexpected moment. Minh Thu and Truc Nhu left the show’s star for each other.

Thu is first to announce her feelings are for Nhu, not for bachelor Nguyen Quoc Trung. She gives up her rose, turns to Nhu, and asks her to come away with her. If the best part isn’t the love and contentment these women can find in each other, then it’s the other candidates being visibly shook! Of course, they leave gracefully and on good terms, making this rose ceremony a romantic plot twist for the books in 2018.

Priyanka Chopra and Nick Jonas showed us what celebrating your SO’s cultural background really looks like. 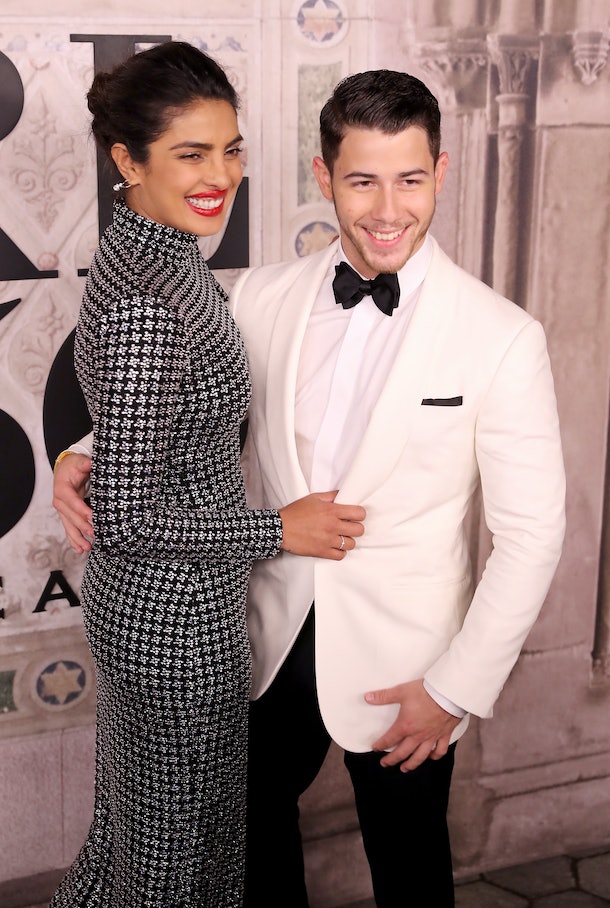 Where would we be in 2018 if we didn’t have the larger-than-life union of Priyanka Chopra and Nick Jonas? All the little details of Chopra-Jonas wedding consumed us from the summer right up until the wedding in December. From Jonas shutting down Tiffany & Co. to Chopra’s bachelorette party in Amsterdam, we knew it was going to be lit.

Even better is that the wedding was perfect blend of Chopra’s and Jonas’ backgrounds. The couple had a Christian ceremony on Dec. 1 and a traditional Indian one the next day.

If you ever want an example of what compromise and balance looks like in relationships, this is it. 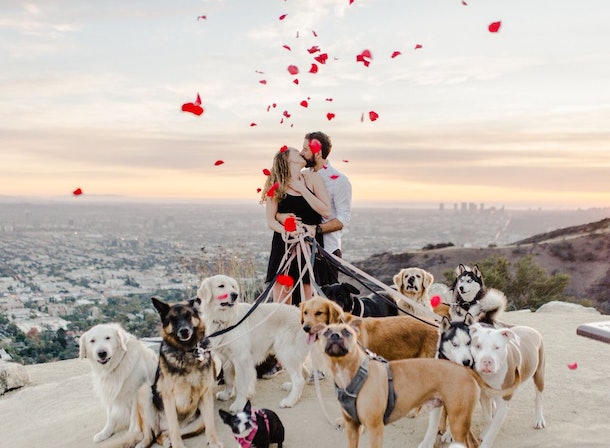 When Maurice Goldstein proposed to Laura Stampler, a freelance writer, YA romance author, and dog lover, he couldn’t have done it in a more fitting way. Goldstein did it at Runyon Canyon, right outside of Los Angeles, as the sun was setting, with 16 dogs.

The whole proposal video is too long for insta but here’s the afterward in which I sob into a pile of VERY GOOD DOGS during a beautiful California sunset ❤️??❤️ (that’s @packofhearts in the center of the pups and bff/brilliant ? @rebeccayale taking a video I tell her not to post on Instagram yet, and my forever love @maugoldstein )

2018 showed us how love continues to prevail — whether it’s sparked with letters or emails, sealed with a ferris wheel, a blessing, or over a dozen dogs. Here’s to romance in 2018 and here’s to another year more.