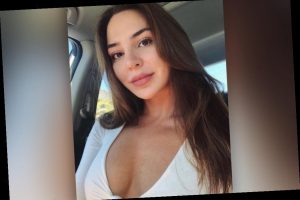 Anfisa Nava from 90 Day Fiancé continues to have a great following on social media even after she stopped appearing on the show. The reality TV star recently made waves announced she was dating a new man. However, things might have gotten out of control and she told her followers she is single once again. Could this lead to a reconciliation with her husband Jorge Nava?

Anfisa Nava and her boyfriend

Nava became part of the 90 Day Fiancé family when she joined the show in season 4. She made her way to the states after getting engaged with U.S. citizen Jorge Nava. Their turbulent relationship was chronicled on the spinoff 90 Day Fiancé: Happily Ever After? for multiple seasons.

The couple stopped appearing when Jorge got into legal trouble and had to go to prison for his illicit activities. Nava is estranged from her husband and had been dating a man called Leo Assaf, until recently.

At the end of May, Nava was gushing over her boyfriend. The latter posted on her social media a message congratulating her on her educational milestone.

“Congratulations baby love,” he wrote on Instagram. “One thing that I love about you is that you don’t let anyone or anything stop you. I couldn’t be any happier for you and I’m so proud of you.”

Nava replied with the following: “Thank you, baby love.”

The exchange was noticed by fans as they called each other “baby love” just like Lisa Hamme and Usman Umar from 90 Day Fiancé: Before the 90 Days. Nava claimed to be a fan of the couple after a fan called her out for using that nickname.

“That’s why we are doing it, huge fans,” Nava replied.

All the love between Nava and Assaf seemed to have burned out. The TV personality told a fan that she had broken up with her boyfriend after a fan asked what had happened to him. When more fans questioned the reason for their split, the TLC star gave more details.

“This guy just doesn’t know what he wants,” Nava explained. “I had girls texting me, ‘your man is in my DMs,’ all the time. The only reason he didn’t physically cheat is because the girl he went out with rejected him. Now he’s trying to throw shade at me. Are all men trash or have I just been lucky to find ‘the best’ specimen?”

#AnfisaNava confirma she has broken up with Leo and says jokingly she’s now thinking of dating women. #90DayFiancé

One of Nava’s fans noted that Assaf seemed to have been liking the extra attention he had been receiving for dating a reality show star.

“He sure has been enjoying the attention he got from being with me,” Nava agreed with her follower. “The most frustrating thing is that I tried to be a bigger person and keep my personal matters private during my last 2 breakups but these guys are just something else.”

When another one of her fans said she gave her “bi vibes,” Nava didn’t shoot it down and possibly pondered on the idea of dating women next.

“I might just switch teams,” Nava replied adding laughing emojis at the end.

Although some fans wish that Nava and her husband get back together, Jorge seems to be happy in his new relationship. There hasn’t been an update on their divorce process.