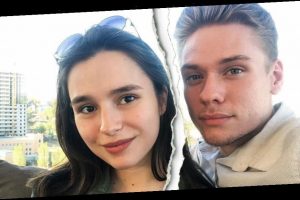 Calling it off. Steven Frend and Olga Koshimbetova, who first appeared on season 6 of 90 Day Fiancé in 2018, have split, he revealed via social media on Saturday, October 10.

“People keep asking if Olga and I are [together] but the answer is, we went into this super blindly,” the reality star, 22, posted via his Instagram Story. “There’s a lot the show left out that’ll have people confused but we have learned a lot about each other over this whole journey but we’re better at being coparents to our boy. We’re both civil and cause no drama because our son’s mental health is [our] top priority.”

Frend and Koshimbetova, who met while she was visiting the United States in 2017, found out they were expecting their first child together after a few months of dating. They welcomed a son, Richie, in April 2018, who was born in her native country of Russia. Eventually, the family received visas to come to the U.S. and moved to Maryland. The former couple married in August 2019.

“(P.S. Don’t assume you know the full story from this one little post),” the Maryland native added via his Instagram, before later deleting all photos of his estranged wife from his account.

Although the Russia native, 22, has not spoken out about the split, she shared a quote via her Instagram Story on Sunday, October 11. “So be kind, because life is hard enough and everyone is fighting their own invisible battle,” the statement read.

Last month, she opened up about going to California with her son — but not with her husband, causing many to speculate about the status of their relationship.

“Where is Steven? Where did you go? Why did you go alone ? And many many others questions I received when I told that I’m going to California. For those who didn’t know, I have a family here,” she wrote via Instagram on September 22. “My uncle came here 23 years ago, alone, without perfect English, without friends but after all these years they have a big family which included friends and other relatives.”

She continued: “As you remembered, I planned to visit them in August but then wildfires happened and I canceled my trip. But after a few weeks my uncle invited me again and i was so excited because I couldn’t spent more days sitting at home. After a car crash we literally stuck at home and unfortunately there are no Uber with a car seat and no bus for us.”

‘90 Day Fiance: The Other Way’: Which Couples Are Still Together?

At the end, she explained why Frend didn’t travel with her. “And another reason: why it was a good idea to go alone without Steven, because we finally started to miss each other,” Koshimbetova wrote, adding the crying laughing emoji. “Spending 24/7 with each other can be really tough. Did ever go somewhere without your partner? Or do you always together?”

END_OF_DOCUMENT_TOKEN_TO_BE_REPLACED

END_OF_DOCUMENT_TOKEN_TO_BE_REPLACED
We and our partners use cookies on this site to improve our service, perform analytics, personalize advertising, measure advertising performance, and remember website preferences.Ok