A burning question when you adore fireworks with a stubborn passion

As smoke from bushfires chokes Sydney, it is hard not to feel a sense of helplessness and impotent rage at the lack of political leadership on climate policy, and the refusal of those in power to do what is necessary to slow global warming. What can we do? What tangible difference can we make?

In an effort to do something, many of my friends on social media have circulated petitions to cancel the Sydney New Year’s Eve fireworks display, with the intention of redirecting funds to firefighting services. Alone among my friends, I find myself torn about this question.

Yes, the fireworks are expensive and the fire service is underfunded. It is kind of obscene to be spending money on fireworks when everything seems to be literally on fire. It does seem a bit like a denial of the tragic events of the past several weeks. 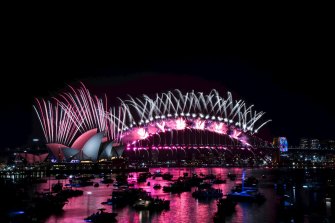 It is kind of obscene to be spending money on fireworks when everything seems to be literally on fire.Credit:Dominic Lorrimer

And yet. I adore fireworks with a stubborn passion. I even miss the old days when you could buy small fireworks at the shop, despite the danger of those things.

The bright fizz of the Catherine Wheels, the liquid sputtering gold of the ones like little volcanoes. This was close to actual magic for a small child. (These memories have been tarnished by spending a couple of “cracker nights” in Darwin over the past couple of years, where those over-the-counter fireworks are still available. Dogs howl with misery at the noise, kids hurt themselves, the whole night is punctured by explosions until way into the early morning, people turn into pyromaniacs and set the whole city on fire.)

Some of my earliest memories as a child in Sydney are watching those magical explosions of light in the night sky on New Year's Eve, the wonder at the epic scale of the thing, the crazy beauty. This year is the first in many that I will spend New Year's Eve in Sydney, and I plan to travel early to Balmain to watch from the Mort Bay area. On my parents’ street nearby the blocks are filled with people – kids and tipsy grown-ups – in a rare moment of communal celebration that seems all the more precious and necessary in the face of this terrible catastrophe of fire and smoke, the sign this season has shown us of the fate that waits for us if no action is taken to stop carbon pollution.

The wealthy suburb of Balmain is in some ways the opposite of a utopian communal paradise of equality, but it is still somewhere you can go to see the fireworks for free. The fireworks are a public celebration, not quite freely and equally accessible to all Sydneysiders, but a public event all the same. Why cancel this event and not other actions and inactions by the government that are equally if not more obscene? Demand an end to coal subsidies, for instance. Stop funding private schools. Take the GST off books. Or get rid of it, and every other regressive tax.

One online poll today gives three options: cancel them because "its the wrong message as our country burns"; and then two "no" options that either support mindless fun ("fireworks are awesome") or mercenary business interest (fireworks bring money). But why does it have to be so black and white? It’s probably true that fireworks that just aim for "awesomeness" would look stupid at this time. But sending a message with fire and smoke might also be powerful.

Could there be a form of protest firework that would satisfy my own particular brand of anti-authoritarian pyromania?

Why can’t there be another option, one that could use the fireworks to make a statement in support of climate action? Could there be a form of protest firework that would satisfy my own particular brand of anti-authoritarian pyromania, embodied by Carrie Fisher’s character in The Blues Brothers setting fire to a petrol station with a flame thrower in an ecstasy of female rage, and by Joan speaking to Peggy Olsen in an elevator in Mad Men, enunciating crisply: "I want to burn this place down"?

What if the fireworks could address the fires and make a case for urgent action on climate issues? It could be an opportunity to mourn, to grieve, to raise awareness, to promote action. Whatever this fireworks display is, it will be felt by all of us Sydneysiders as in some way a funeral pyre, a warning flare, an image of the fires so close to us that should terrify and move us as well as be awesome.

The bridge is watched by millions of people around the world on New Year’s Eve. In the past it has been used to celebrate marriage equality with a display of rainbow colours and to assert Indigenous presence, the year the pylons were lit to say: "Always was, always will be, Aboriginal Land." What if the bridge said: "Climate action now"? Or showed an image of our blue planet slowly consumed by fire, turning into the lump of burnt coal it will become. Or that thing some guy said and no one can agree who it was: "It is easier to imagine the end of the world than the end of capitalism."

The spectacle of the bridge on fire, and the harbour shrouded by smoke, is not necessarily an image that makes it look as if we don’t care. It could be one that shows that we understand this is our terrible fate if we do not demand necessary changes now, even when it may be too late.