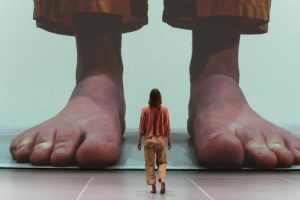 For more than eight years, choreographer Sarah Aiken has experimented with concepts of enlargement and diminishment, using prostheses and digital trickery to mess with the way we perceive bodies in space. Her solo investigations have been consistently interesting, but this new show is the first time she has distilled her ideas into a satisfying concert experience.

Here she links her research on the way that augmented and mediated bodies take up different kinds of space to psychological questions about interpersonal relationships and agency.

Do you feel, she asks, like a giant among midgets? Or a helpless part of an overwhelming reality? 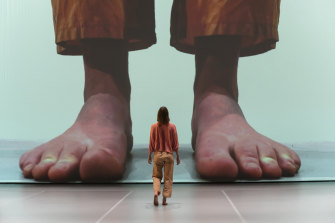 There are three parts to this meditative, hour-long blend of video and live performance. The opening sequence is a simple but compelling treatment of differently scaled silhouettes projected on a large screen. Aiken’s shadow initially looms large but is reduced by degrees, changing our sense of the structure around it.

The next section is an extended – perhaps overextended – dialogue between Aiken and a pre-recorded video of herself blown up to prodigious size.

Once again, the trick is modest but effective. We really do have the sense that a colossus is present: a behemoth who is also mentally self-sufficient and confident of her global significance.

Aiken then dances in front of the projected figure who is now so large we can see only the pores of her skin and the vessels in her eye. She moves in a restrained way, comfortable with her relative smallness while a barrage of digital effects and Andrew Wilson’s swelling score gesture toward the cosmic.

The last section, which shows us the bloom cycle of a corpse flower among other things, finishes with an effective coup de théâtre moment in which the virtual unexpectedly becomes real, lightening the mood and playfully gesturing toward a world of other people.