Home » Lifestyle » A cracker of an art event

A cracker of an art event 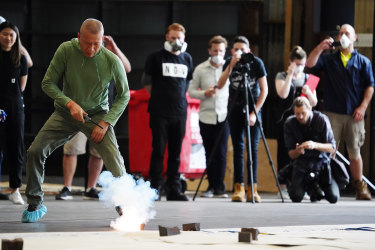 It took dozens of people and hours of preparation but in the end, Cai Guo-Qiang’s “explosion event” was over in seconds. Which is amusing, given he likens the process to “making love”.

The internationally acclaimed Chinese-born artist, now based in New York, is in Melbourne this week creating three large-scale “gunpowder drawings” that will exhibit for the first time at the NGV’s Winter Masterpieces in May, alongside 10 of the famous Terracotta Warriors and 150 more ancient Chinese artefacts. 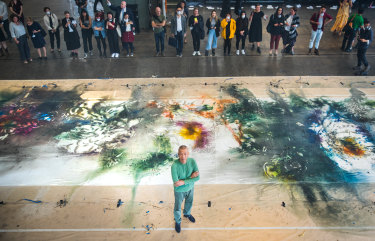 Cai and his team laid out more than 100 square metres of silk – 31 metres in length – on the huge concrete floor of Williamstown’s hangar-like Seaworks, down by the docks. On top of the silk went a hand-cut stencil of the same size, which Cai then filled in with coloured gunpowder – the same kind used to create coloured fireworks. (Cai directed the visual and special effects for the 2008 Beijing Olympics.) When the gunpowder is lit, the colour is singed onto the silk. 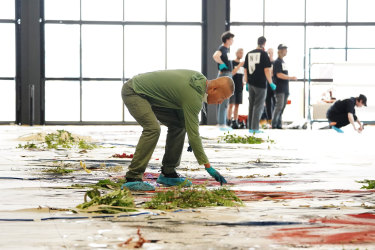 Cai puts finishing touches on the stencil before the gunpoweder is lit.Credit:AAP

A final layer of cardboard went on top, weighted down with bricks, before Cai lit the fuse. A great big crackling boom accompanied a flash of light as plumes of smoke, smelling of sulphur and party sparklers, filled the air.

Transience II (Peony) was the final – and largest – of three works Cai completed yesterday in Melbourne especially for the NGV. The works were inspired by a visit to the mausoleum of the Qin emperor in Peony, where the Terracotta Warriors are from, and will be presented in conjunction with the warriors exhibit.

“The painting shows the four stages of the lives of the peony, from its emergence to blossom to withering and to death,” Cai said via a translator. 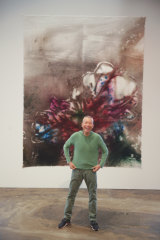 Cai Guo-Qiang with one silk panel, hung shortly after the work was completed.Credit:Simon Schluter

He included leaves and branches from local trees in the stencilling process; their outline was clearly visible on the silk after the smoke died down and viewers could see the final result. “I’m having a dialogue with the plants in Melbourne,” Cai said.

When this piece goes on display at the NGV it will be hung in a circular space so visitors can experience it in 360 degrees. Suspended above will be 10,000 porcelain birds, also coloured by gunpowder, arranged in a calligraphic representation of the sacred Mount Li, where Emperor Qin Shihuang's tomb is located. Only 10 terracotta warriors will feature in the adjacent exhibit – the maximum amount loaned to an overseas institution at a time.

Cai said the birds were designed to evoke the enormity of the original tomb site.

“I first visited [the site] when I was very young and I was very touched by the powerful image of the 8000 terracotta soldiers,” Cai said. The porcelain birds will “hover in the sky, representing the lingering spirits of the thousands of the underground army”.

Gunpowder is just one of many traditional Chinese materials – including porcelain, silk, paper and calligraphy – that Cai uses in his work to create a through-line to his cultural heritage. He is all too aware of the fact that gunpowder is used for violence the world over. But when it was originally invented in China, he says, it was used for healing.

“The Chinese translation literally means ‘fire medicine’,” he explains. “I want to show that it can still create something beautiful.”

Cai Guo-Qiang: The Transient Landscape will be presented in parallel with Terracotta Warriors: Guardians of Immortality at NGV International, May 24 to October 13.

END_OF_DOCUMENT_TOKEN_TO_BE_REPLACED

END_OF_DOCUMENT_TOKEN_TO_BE_REPLACED
We and our partners use cookies on this site to improve our service, perform analytics, personalize advertising, measure advertising performance, and remember website preferences.Ok