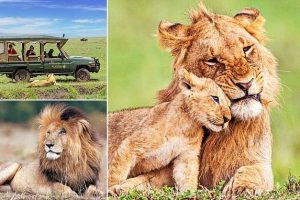 All you need is love… if you’re a lion. The monarchs of the African plains are unique among the big cats for the close bonds of affection between members of the same pride or family.

Wildlife cameraman Simon King, who has followed and filmed one pride in Kenya’s Maasai Mara marshlands reserve for more than 30 years, has learned to interpret all the different ways these animals show love.

‘When you see lions rubbing their heads together in greeting, and exchanging scents, the only word I can come up with is “love”,’ he says. ‘And when a lioness takes on a buffalo that is trying to trample her cubs, I believe that’s no different to the instinct that makes a human mother run into traffic to save her child.’

Because they’re used to seeing camera crews, the Marsh Pride have become a popular safari attraction too. Local guides call them the ‘Sure Thing’ lions – for decades when they took a party of tourists into the marshlands, the lions were sure to be around.

‘Lions are supremely confident animals,’ Simon says. ‘That comes from being part of a collective unit, living in the open together. 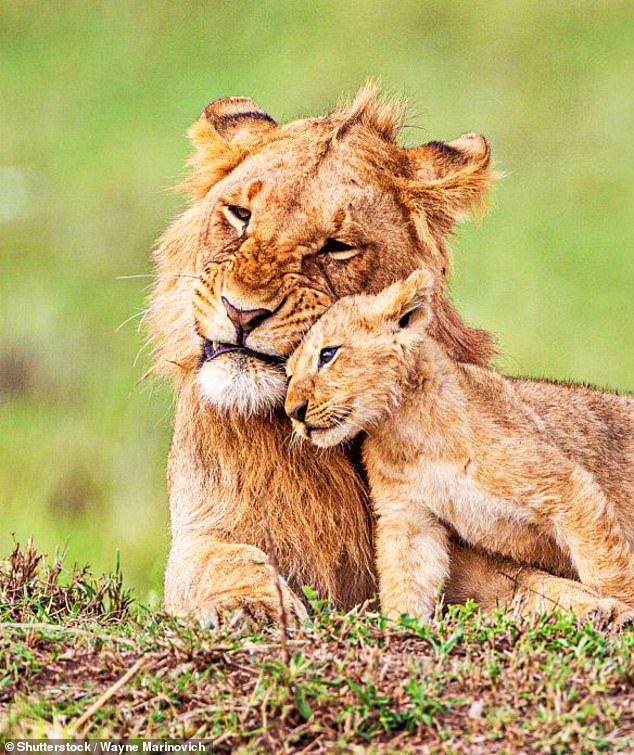 Wildlife cameraman Simon King, who has followed and filmed one pride in Kenya’s Maasai Mara marshlands reserve for more than 30 years, has learned to interpret all the different ways these animals show love

‘When they see our Land Rovers, they often don’t run away. Our biggest problem is that they sometimes head straight for us – and lie under the vehicles. They see us as mobile shade.’

Every lion has its own personality. Over the decades the film-makers have charted their different temperaments, and now a BBC retrospective looks at some of the biggest characters.

There was Alex, a young male with an appetite so greedy the guides nicknamed him ‘Small Hippo’.

And there was Yaya, a growing lioness who behaved like a kitten. By the time she was three she was bigger than her mother, Charm, but as clumsy and gangling as a human teenager.

Yaya loved to hunt, and liked to practise when the rest of the pride were resting. While her mother was asleep under a tree, Yaya would be stalking a warthog…or a cameraman.

Guide Sammy Munene once saved a BBC crew from a close call when he spotted Yaya just yards away, sliding stealthily through the long grass towards their 4×4. She might simply have been curious, but Sammy wasn’t waiting to find out. 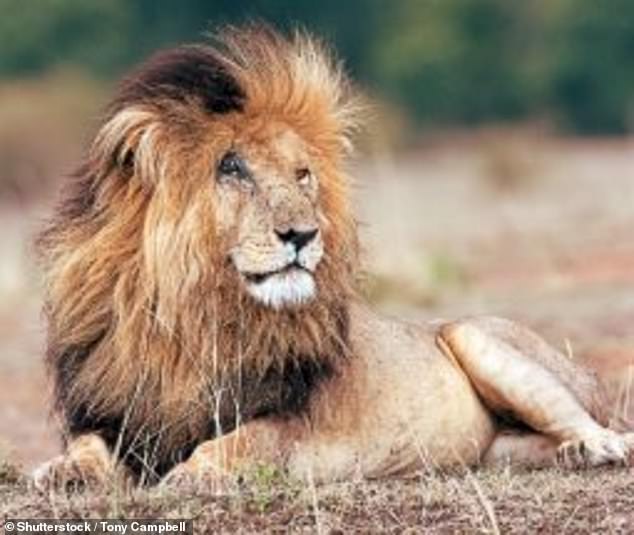 Former leader Scar. ‘Lions are supremely confident animals,’ Simon says. ‘That comes from being part of a collective unit, living in the open together’

He put his foot down.

Blondie and Simba were a pair of males who showed up like gunslingers striding into town in a spaghetti western. The Marsh Pride was ruled by a dominant male, Scar – but the newcomers had a message for him.

In a ruthless display of power, they caught a hyena, toyed with it and then killed it – before dumping its bloody carcass in full view of Scar and the other lions. The message could not have been more clear.

Within days, Scar was gone, exiled from his own pride, and Blondie and Simba now shared the throne. Sadly, this was a certain death sentence for the former king.

One of the greatest risks comes from the human population, in particular the Maasai farmers. Unable to hunt buffalo or giraffe alone, a solitary lion will often turn to the cattle herds, trying to pick off a calf or two.

The farmers’ retribution is deadly. Although it’s illegal, poison is often used. 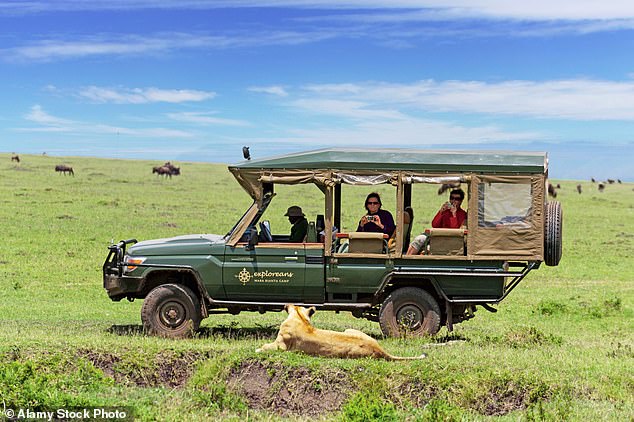 On safari in the Maasai Mara. Simon is close to tears as he describes how poisoning has decimated the Marsh Pride

Simon is close to tears as he describes how poisoning has decimated the Marsh Pride. Meat laced with a pesticide called carbofuran has been dumped as bait in the Mara nature reserve.

One dose is powerful enough to kill a family of lions – and there are just 2,000 of the big cats left in Kenya.

‘It has a profound emotional effect on me,’ says Simon. ‘I know each lion, I’ve watched them for decades, and it’s really hard to talk about it.’

Six years ago a poisoned carcass left eight of the Marsh Pride close to death. Despite urgent efforts by vets, three died.

Others in the pride disappeared at the same time and, though there’s no proof they were poisoned, conservationists feared the worst.

For centuries the Maasai and the cats lived alongside each other with mutual respect. Lions are one of Kenya’s greatest assets, attracting thousands of tourists eager to see them in the wild.

But as Kenya’s population booms, the balance has changed. Not only are new towns spreading across the plains to the edge of the reserve, but cattle herds are often ten times larger.

Lions that wouldn’t dare attack a small, well-guarded herd are much more likely to take a calf if the humans are a quarter of a mile away.

‘We have to remember that the human communities are often on the edge of survival themselves, especially in the drought season,’ says Simon.

‘There are education projects telling people how precious these lions are. But the farmers don’t necessarily get compensation if a lion kills one of their cattle. And though tourism is crucial for Kenya, individual herdsmen might not feel the benefit.’

There is hope. Projects in other parts of Kenya have shown that metal mesh enclosures known as bomas are effective at keeping herds safe from predators.

But the most direct way to help is to go on safari. The more people who want to see lions, the more valuable the animals become to the economy…and the better protected they’ll be.

Go and see the ‘Sure Thing’ lions. Just don’t be surprised if one decides to snooze under your Land Rover.