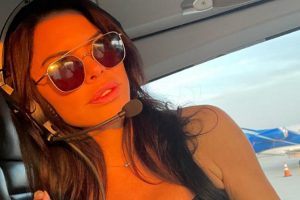 As an American media figure, Lauren Sanchez rose to prominence by reporting on celebrity news and events. She has hosted on The View, co-hosted Good Day LA on KTTV Fox 11, anchored the Fox 11 Ten O’Clock News, and served as a special correspondent and anchor for Extra. Additionally, Sanchez has been a frequent guest on shows like Larry King Live, The Joy Behar Show, and Showbiz Tonight. Since Sanchez’s current boyfriend is Amazon’s founder and second-richest man in the world with a net worth of $198 billion, her personal life has been thrown into the public eye.

The couple reportedly began having an affair in January 2018 while Bezos was still married to Scott. Sánchez and her mega-rich spouse have been photographed everywhere, from pristine beaches to luxury shopping, private aircraft, superyachts, and the finest restaurants in the world. To say that dating the world’s third richest man has altered her way of life would be an understatement. Take a peek at Lauren Sánchez’s opulent lifestyle.

A Luxurious Wardrobe And Lavish Holidays Across The World

The Amazon CEO and Emmy winner are frequently photographed on lavish holidays worldwide, from their $42,000 yacht to the picturesque streets of London. This past August, Jeff Bezos took his girlfriend, Sanchez, on a romantic holiday to London, where she essentially turned the entire city into her runway show. She also wore several designer dresses and accessorized them with expensive jewelry and other trinkets while they were on their luxurious trip. In addition, she accessorized her outfits with pricey accessories such as a $28,500 Jacquie Aiche necklace set, an ultra expensive Birkin bag worth $105,000, and $1,045 Cartier sunglasses.

On one occasion, Sánchez wore a tan ribbed crop top, a long semi-sheer skirt, a huge necklace, and sunglasses when they were seen strolling hand in hand at Nobu in Malibu. Her companion matched her laid-back summer attire by donning a fitted gray T-shirt, light-wash denim, and new white sneakers. Instead of braving the frigid temperatures of winter, the power couple was spotted celebrating the holidays with their family on a yacht off the coast of St. Barts in the Caribbean. The pair cuddled up in a passionate embrace as they saw the sights from their 88-inch boat, which cost over $38,000 per week. The two also went on a romantic hike together on the Caribbean island.

Being the girlfriend of the wealthiest man alive and an award-winning journalist has its perks. At the Los Angeles premiere of “The Lord of the Rings: The Rings of Power” on Amazon Prime Video, Lauren Sánchez made a heavenly fashion statement. The award-winning journalist was accompanied by her boyfriend, Bezos, and she wore a white crêpe jersey gown by Tom Ford with a side split that created a fluid drape. To match, she wore metallic gold sandals. Sanchez wore bangles and yellow diamond earrings to accentuate her dress’s Grecian-goddess form, and she smoothed out her dark hair.

With his girlfriend Lauren Sanchez at his side, Jeff Bezos also lavishly celebrated the arrival of 2022. Bezos posted photographs from his “crazy disco party” on Instagram. To celebrate, Sanchez and Bezos chartered the superyacht Tender To. The weekly charter fee for the 88-foot sailboat can reach up to $31,000. They weren’t the only ones on the Caribbean cruise; the yacht had room for up to seven guests. Sanchez’s ex-partner, NFL star Tony Gonzalez, and his wife also came for the ride. Sanchez and Gonzalez’s adult son Nikko accompanied them.

Spending Time On A $78 Million Mansion In Hawaii

According to reports, in 2021, Bezos and Sanchez spent $78 million on a mansion on the south bank of the Valley Isle in La Perouse Bay, close to Makena. This beachside house is distant and secluded even by Hawaii’s high standards. The roughly 14-acre compound is located in an undeveloped area of southern Maui, far from Kahului, the island’s largest city and the main tourist attraction. It is surrounded by state parkland and lava fields and is located about 12 miles south of Kihei, the closest large city. There certainly won’t be any trick-or-treaters in this area. The La Perouse Bay property, also known as the Carter estate, is one of a kind since it consists of seven adjoining pieces of land and the remnants of a Hawaiian fishpond.

As a result, Bezos and Sanchez now have exclusive use of a stretch of pristine white sand beach. The estate has a spacious main house of 4,500 square feet in size and a large guest house of 1,700 square feet in length, yet the paparazzi can only catch a peek of the property. The couple can enjoy the wonderful Hawaiian days without leaving the property, thanks to the outdoor kitchen, round swimming pool, and sandy white beach. They’re always on vacation, with the Pacific Ocean as part of the couple’s front yard and beautiful palm trees filling his garden.

READ NEXT: Life Post Amazon: Here’s What Jeff Bezos Plans To Do After Stepping Down As CEO Of Amazon