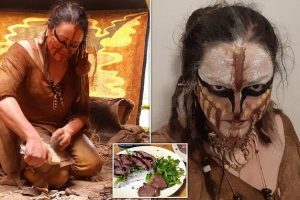 Self-declared ‘professional cave woman’, 34, reveals she dines on roadkill such as ‘mild and sweet’ rat meat, makes the bones into tools and uses the skin to make clothes

A woman who regularly stops her car to pick up roadkill to feast on claims that rat meat is nicer than chicken.

Sarah Day, 34, from Colchester, Essex is not squeamish about eating most animals, from rat or deer to pheasant and rabbit.

For the self-proclaimed ‘professional cavewoman’, it isn’t just the meat she strips the roadkill for – but the skin and bones too.

Sarah, who teaches children history and survival skills for a living, has shared a selection of dishes she has whipped up, such as pigeon wings and a sliced venison sandwich. 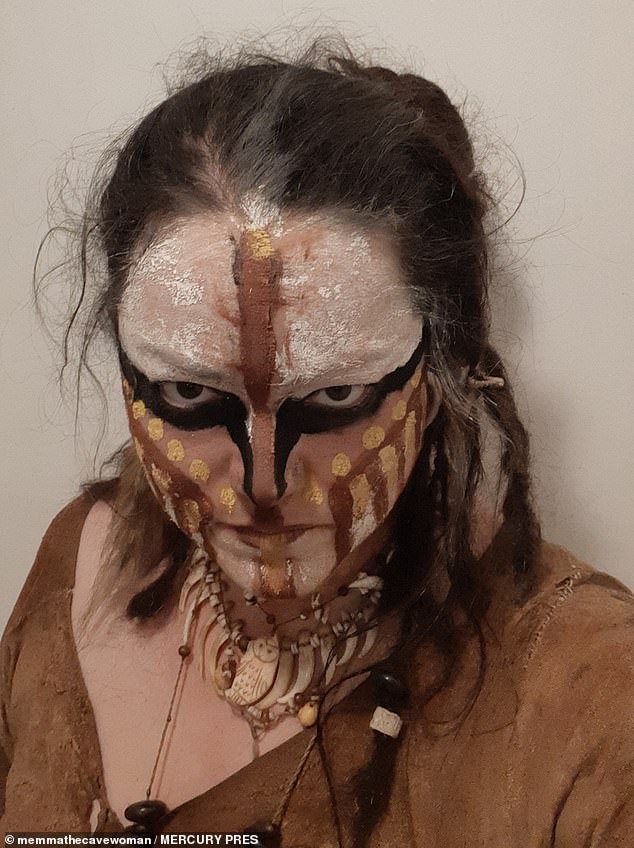 Sarah Day, 34, calls herself a professional cave woman and will use dead animals for meat, fur and leather 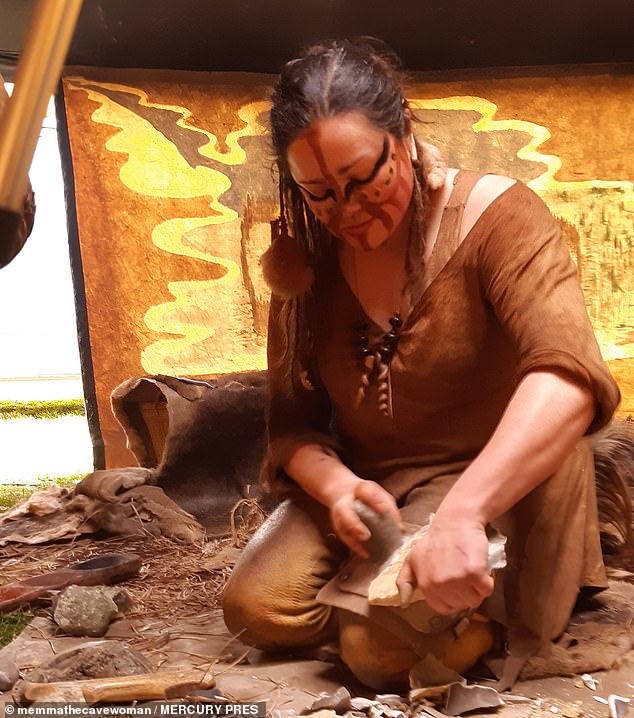 If roadkill is still juicy and warm, and largely intact, then Sarah will take it home and cook it or preserve it

Sarah said: ‘I eat roadkill at least once a week although there isn’t always an animal on the side of the road.

‘My freezer is full of roadkill finds which is handy during the winter because I can defrost the deer or rabbit to make a hearty stew.’

‘Rat is very similar to squirrel, it is mild and sweet.’

‘It tastes a little bit like chicken, but much nicer.’ 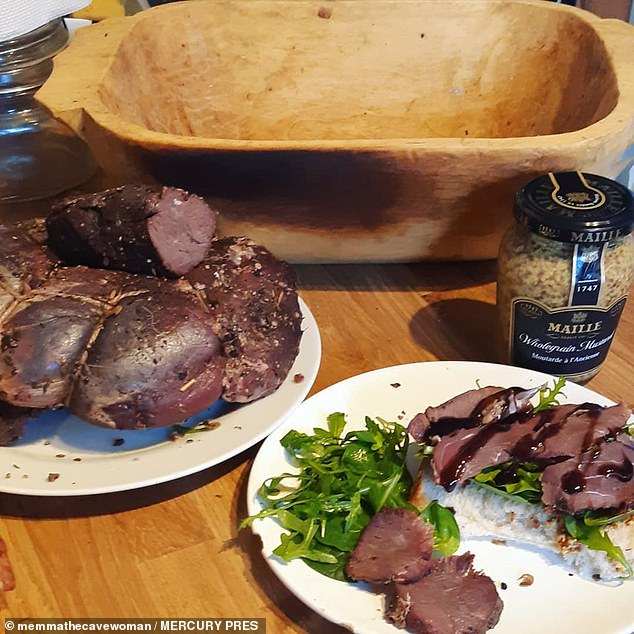 Her freezer is full of roadkill finds which she finds handy during the winter as she can defrost the deer or rabbit to make a hearty stew. Pictured: venison roadkill 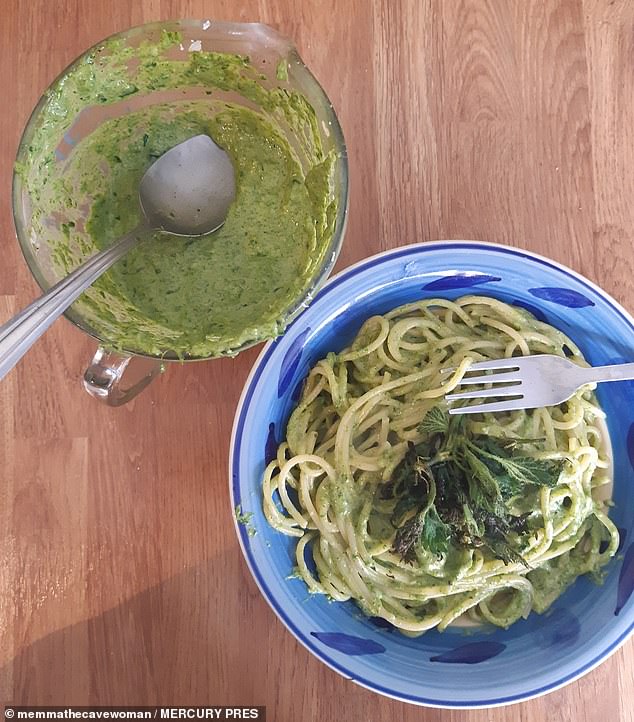 Homemade pesto from foraging. Cramp bark is another foraged item that Sarah claims is amazing for easing period pains

‘And pigeon is like a really good beef steak.’

‘Sometimes, I may come across an animal but it is unsafe to eat because it is cold and floppy, meaning it has been there for longer than 24 hours.’

‘Sometimes roadkill is simply too damaged.’ 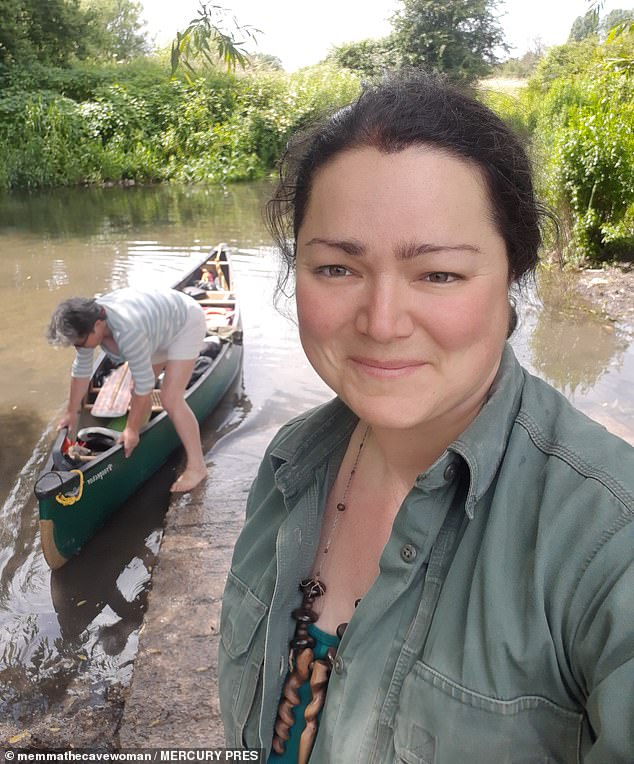 When she is given an animal or find road kill, her philosophy is to use as much of the animal as possible

As well as finding meat, Sarah will source herbs; rosemary, sage and thyme, and meadowsweet which contains an aspirin-like chemical that helps with a cough. Pictured: fruit she foraged

‘But if it is still juicy and warm, and largely intact, then it is good to go.’

As well as making use of the meat, Sarah said that when she’s given an animal or finds roadkill, her philosophy is to use as much of the carcass as possible.’

‘I use their bones to make tools and weapons.’ 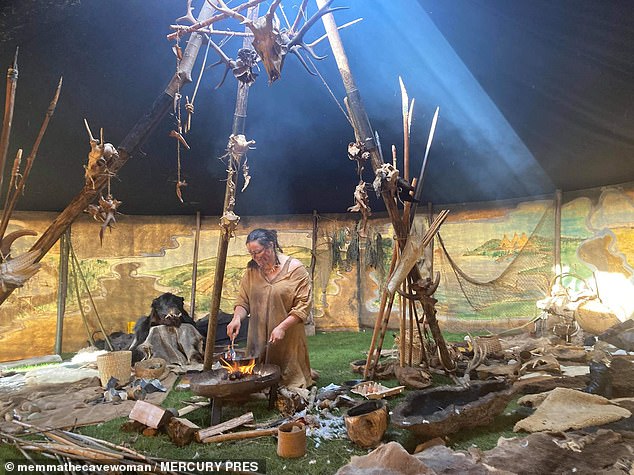 Sarah Day surrounded by real animal skins and cooking on a fire. She keeps skulls as she admires the engineering 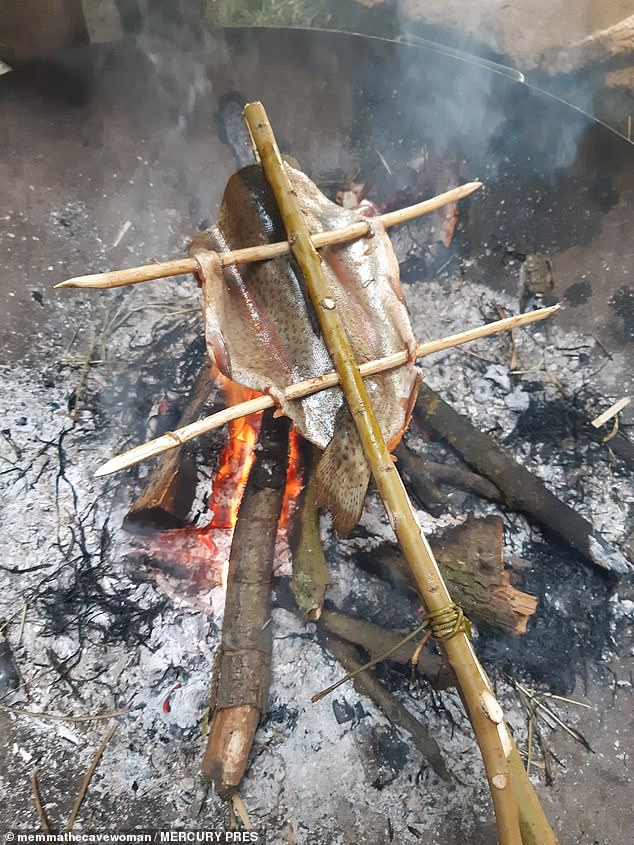 Sarah thinks survival has become sensationalised, and says it’s not about running around and climbing waterfalls. Pictured: cooking fish 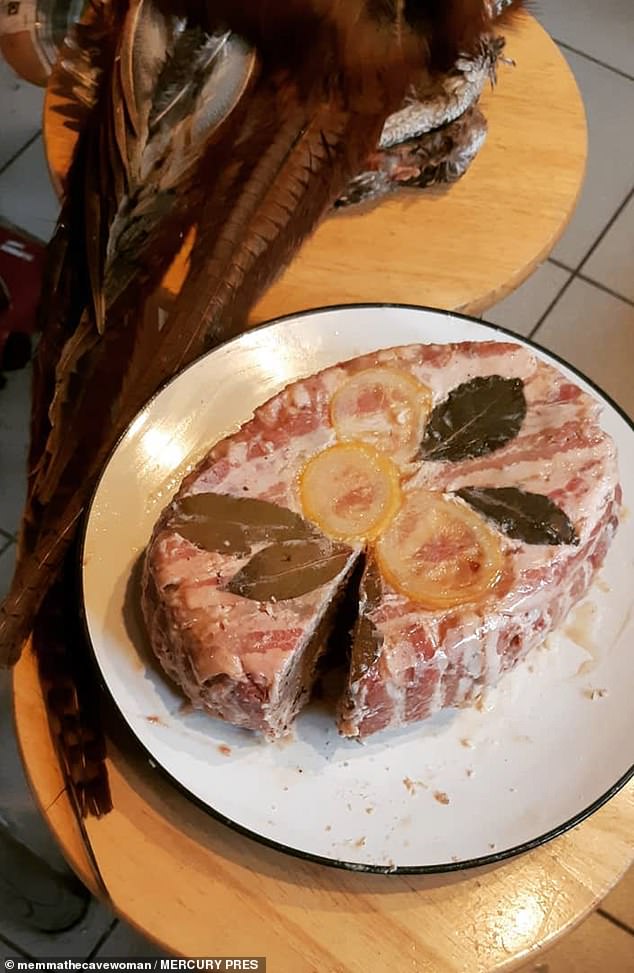 Pheasant rabbit and pigeon terrine. Sarah said that pigeon is a lot like a really good beef steak

‘I keep the skull because they are amazing bits of engineering.

‘I don’t see any harm in doing this because the animal has died anyway, rather than it get skinned in any other way.’

Despite having frozen roadkill at home, Sarah still shops in her local supermarkets for meat.

Sarah Day works teaching schoolchildren survival skills. As well as eating meat, Sarah likes to test how plants work for coughs and headaches rather than going to a chemist 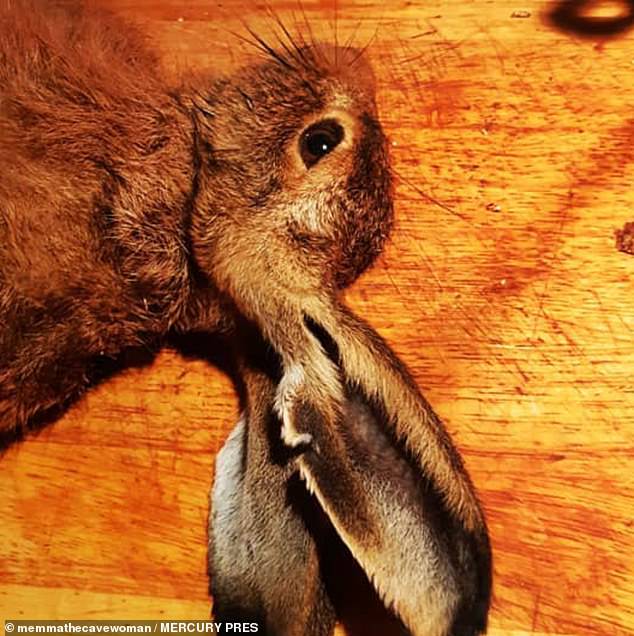 Sometimes, Sarah comes across an animal but it is unsafe to eat as it will be cold and floppy meaning it has been there for longer than 24 hours. Pictured: Roadkill rabbit 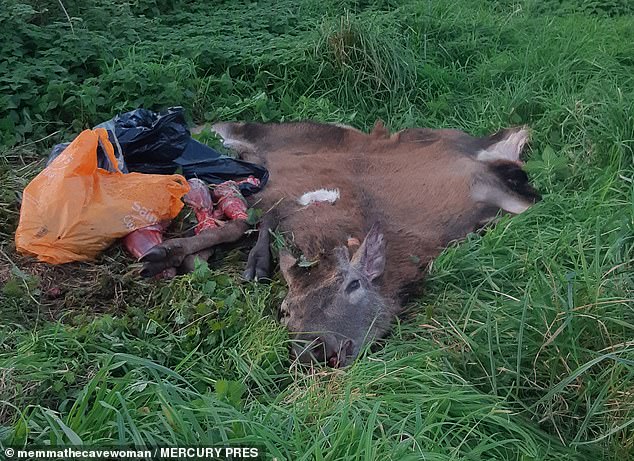 Pictured, Roadkill deer. Sarah will often use dead animals for their skin, and doesn’t see any harm in doing this as it is already dead 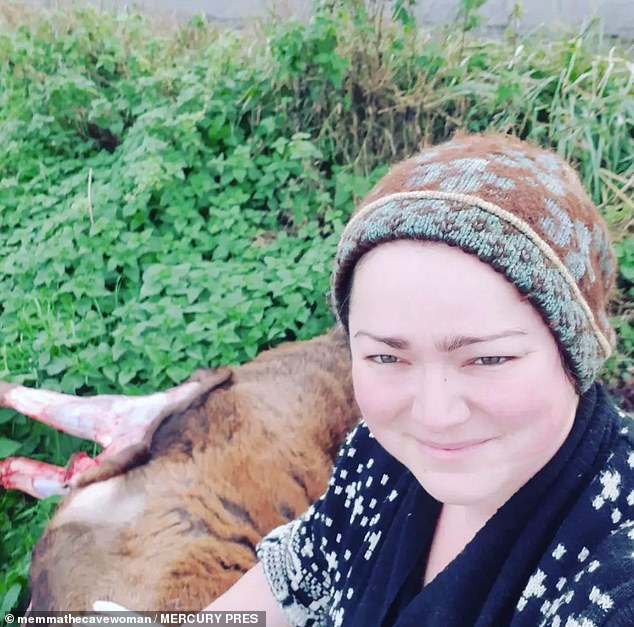 Sarah Day with some road kill. Despite having frozen roadkill at home, Sarah still shops in her local supermarkets for meat

According to the teacher, living in the wilderness is about about working smart, the more you practise the better you become. Pictured: Roadkill on a chopping board 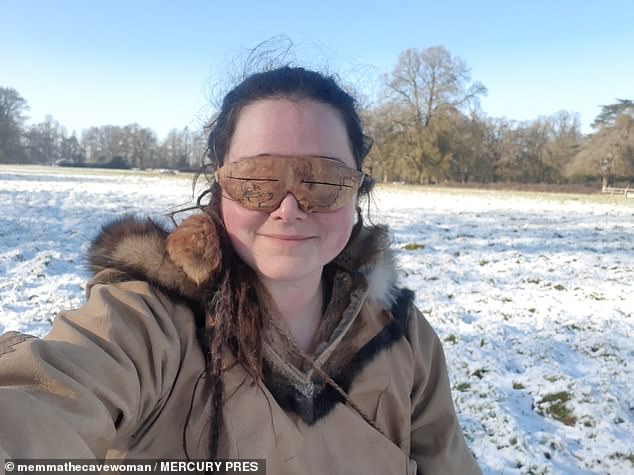 Although Sarah has a house in the middle of a town which is her official home, she admits she would rather be in a tent

‘You should never be alone as it’s hard to provide for yourself alone in any historical period – you need other people to help build stuff and hunt.’

‘ You can’t live without it: It is not only essential for warmth, cooking and scaring biting animals away but fire is needed for bending wood and making glue.’

4. Only eat things that you are certain are edible

‘Even drinking stream water without sterilising it can be harmful, so do your research!’

5. Adapt your expectation to a level you can meet

‘Never underestimate how hard it is.’

She adds: ‘I do buy meat from the shop because you are not like to find a road kill pig.

‘I tend to forage plants and fruit but it is so important to do your research so that you don’t end up very sick.’

‘I like to test how plants work for coughs and headaches rather than going to a chemist.

‘I forage medicinal things such as willow bark. It can be eaten, but is revolting- better made into a tea for headache.’

‘I also combine rosemary, sage and thyme, meadowsweet which contains an aspirin-like chemical that helps with a cough.’

‘The Amber-like resin that comes out of a cherry tree helps coat a sore throat, reducing pain.’

‘Cramp bark is also amazing for period pains – I didn’t want to believe it would work, but it really does!’

Sarah’s fascination with the Stone Age began when she was just a child. 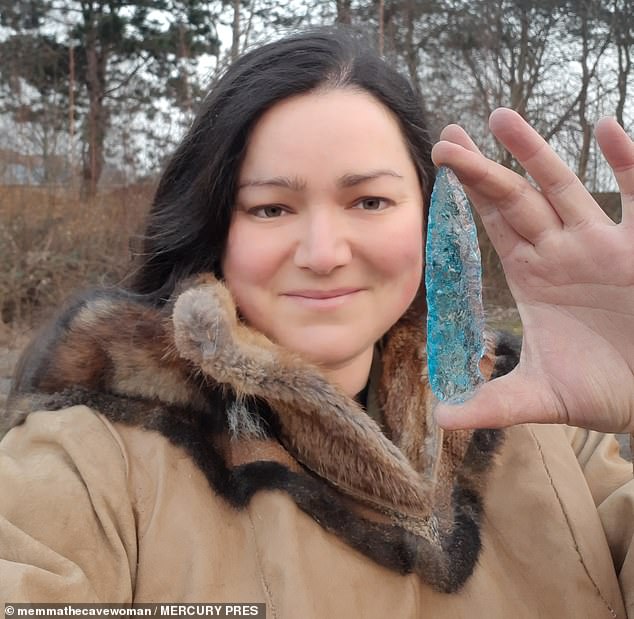 Ever since becoming fascinated with the stone age, her life has revolved around learning new survival skills such as how to build shelter, start fires from scratch and of course, how to eat road kill. Pictured: Sarah with a fossil 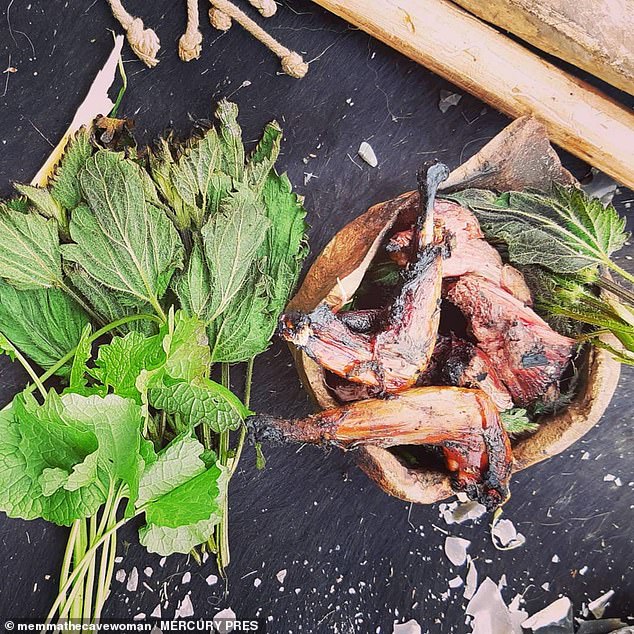 Sarah, who teaches children history and survival skills for a living, has shared a selection of dishes she has whipped up such as pigeon wings (pictured) and a sliced venison sandwich. 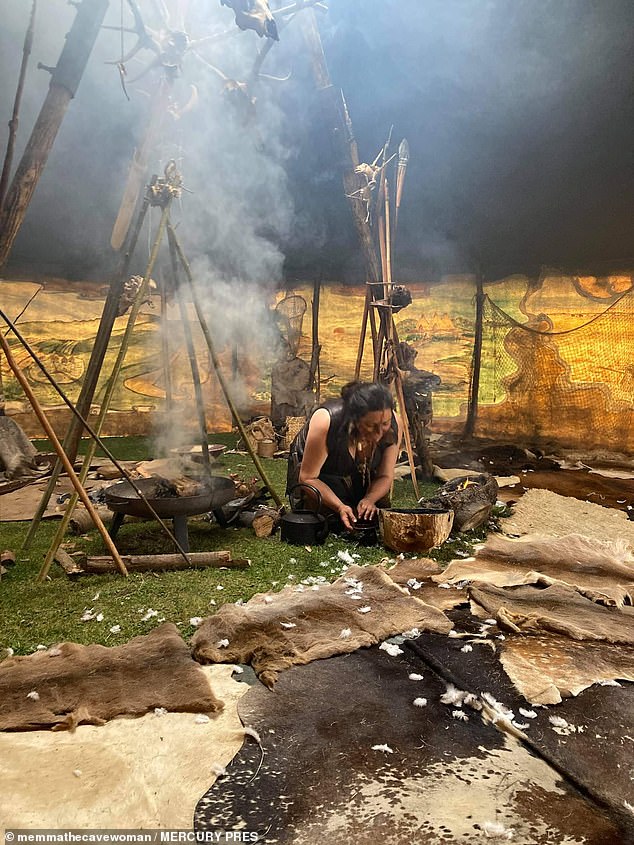 Ever since, her life has revolved around learning new survival skills such as how to build shelter, start fires from scratch and of course, how to eat roadkill.

She adds: ‘I refer to myself as a professional cave woman.’

‘I do have a house in the middle of a town, which is my official home – but I would rather be in a tent.’

‘I made my very own sleeping bag out of reindeer skin. I have also made a selection of clothes from roadkill for work.’ 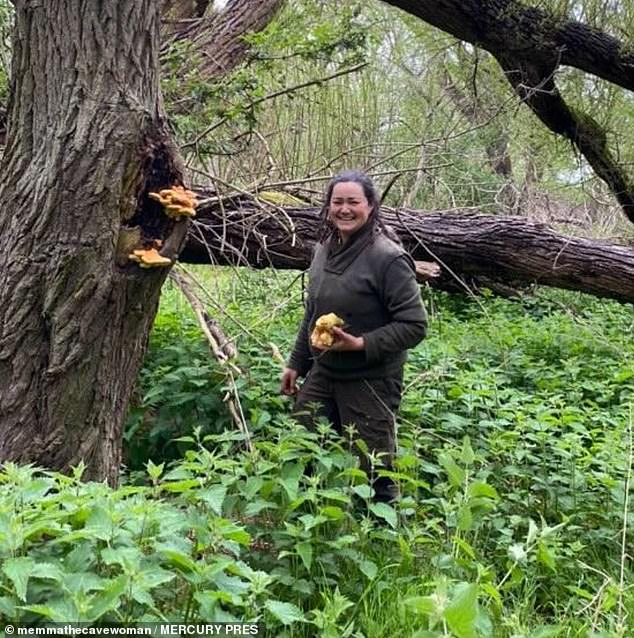 Sarah foraging Chicken Of The Woods mushrooms. She tends to forage plants and fruit but warns that extensive research is important for staying safe 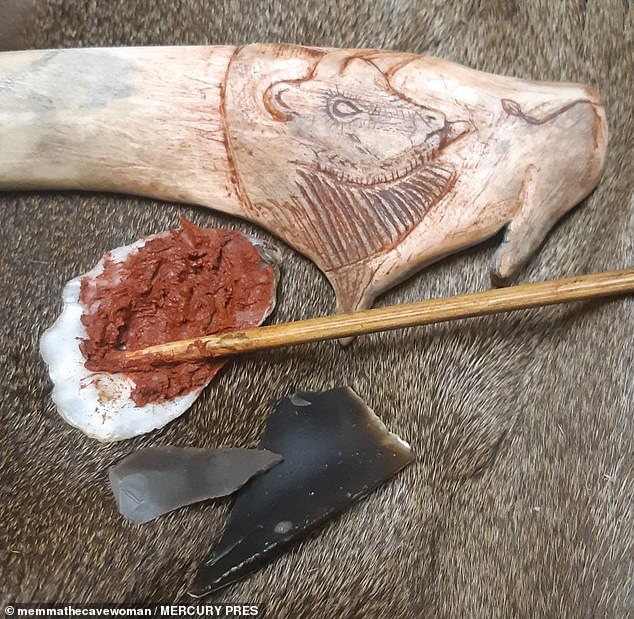 Sarah Day, 34, uses bones to make stone age weapons. She’s careful to try to use every part of the animals she eats

‘I am currently soaking salmon skins in 100 old tea bags to make leather.’

‘I have lived off the land before for a few days and you don’t feel like an amazing hunter.

‘You feel exhausted and achy. It is an effort to lift your feet up – it’s not like a film.’

‘It is all about working smart, the more you practise the better you become.’

‘I think survival has become sensationalised, it’s not about running around and climbing waterfalls – the better you are, the more chilled you are.’