Home » Lifestyle » A Timeline Of Kate And Meghan’s Rocky Relationship

A Timeline Of Kate And Meghan’s Rocky Relationship 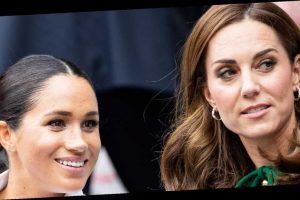 From the beginning of Meghan Markle’s relationship with Prince Harry, she found herself compared to the women in Harry’s life. For one, the press thoroughly dissected the differences between Meghan and any other woman Harry had dated. She was also compared to his late mother, Princess Diana, his grandmother, Queen Elizabeth, and his sister-in-law, Kate Middleton.

The comparisons to Kate seemed designed, particularly by the British press, to pit the two against each other. In reality, the ladies had quite a bit in common. To begin with, they’re just five months apart in age (via Cheatsheet). According to Hello magazine, in addition to their impeccable fashion sense and education, the two also shared a love of the outdoors, attending Wimbledon, and a passion for humanitarian work, particularly when it comes to children.

Admittedly, it seemed like the two got along pretty well at the beginning. Meghan was initially welcomed into the royal family with open arms, as far as the public knew. The two princely brothers and their other halves were even dubbed the “Fab Four” (per Hello!).

Problems started with reports that Pippa Middleton, Kate’s sister, didn’t want Meghan at her wedding for fear of competition. As told in the book Finding Freedom, “Both the bride and her mom, Carole, privately harbored concerns that the American actress’s presence alongside Harry might overshadow the main event” (via Elle).

There were also rumors that William didn’t feel Meghan was a good fit for Harry and voiced those opinions. Harry also reportedly felt that William and Kate weren’t welcoming enough to Meghan at first (via The Times).

All of it came to a head with claims of a confrontation between Meghan and Kate. The women allegedly got into an argument about flower girl dresses for the royal wedding. Kate’s daughter, Princess Charlotte, was a flower girl. Initial reports slammed Meghan for making Kate cry, though Meghan told Oprah it was actually the other way around. “No. [I didn’t make Kate cry],” she told Oprah during the interview (via Elle). “No, no, the reverse happened. And I don’t say that to be disparaging to anyone, because it was a really hard week of the wedding, and she was upset about something, but she owned it, and she apologized, and she brought me flowers and a note apologizing and she did what I would do if I knew that I hurt someone. To just take accountability for it.”

While Meghan said it hurt her that the story was so distorted by the press, she doesn’t blame Kate for it. “I think it’s really important for people to understand the truth, but also I think a lot of it was fed into by the media,” Megan said (via Elle). “[Kate’s] a good person. So much of what I have seen play out is this idea of polarity where if you love me, you don’t have to hate her. And if you love her, you don’t need to hate me.”

Things between the sisters-in-law continued to seem strained

The controversy seemed to take a back seat — at least temporarily — when Harry and Meghan shared the happy news they were expecting their first child in October 2018. The two princes and their wives appeared together for the first time during Christmas celebrations in 2018 and everyone put on a happy front (via Vanity Fair).

Still, there was a definite feeling of iciness between the once-beloved “Fab Four.” When the two couples decided to split their offices, a time during which Harry and Meghan were moving to Frogmore Cottage in spring 2019, it seemed to many royal fans like the writing was on the wall.

Not long after Archie’s birth in May, Meghan attended Trooping the Colour, a parade celebrating the Queen’s birthday. She rode in a carriage with Harry, Kate, and Camilla (via Marie Claire). Things seemed peaceful enough at the time, with Meghan and Kate even taking in some tennis at Wimbledon together later that summer (via Insider).

Harry and Meghan stepped back as senior royals in spring 2020

After a few months off where many thought they were recuperating from intense media scrutiny, Harry and Meghan announced they were actually planning their departure. They decided to step away from their roles as senior working royals and split their time between England and North America (per BBC). The royal family agreed to the move on a trial basis for a year, but behind the scenes, many were allegedly angry with the couple. All of this, of course, led to more rumors and nastiness about Meghan and Kate in the media.

“Kate is furious about the larger workload. Of course she’s smiling and dressing appropriately but she doesn’t want this,” a source said of Kate’s feelings after the announcement (via Page Six). Certainly, Kate and William seemed cold toward Meghan and Harry during their very last royal engagement together. At the March 2020 Commonwealth Service at Westminster Abbey, the couples arrived and left separately. There was an awkward greeting, and no other talk between the couples (via Insider).

These days, it seems the issues are more between Harry and William than Meghan and Kate. While it’s a relief not to see the women pitted against each other, the distance between the two brothers looks like it will be difficult relationship to mend. Time will tell.