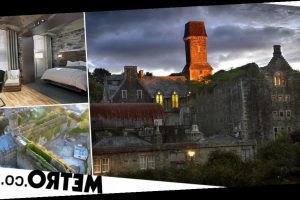 Halloween might be over but you don’t have to wait for the annual event to give yourself the spooks.

The brave-hearted can still give themselves thrills with this luxury hotel that was transformed from its original purpose – a jail that was the site for 55 executions between 1779 and 1927.

Bodmin Jail Hotel is said to be one of the most haunted establishments but has now undergone a massive restoration from a derelict 18th-century prison into a four-star joint.

Restorations for the hotel, located in Cornwall, took five years to complete and will be available to book from February 2021.

Rates for the rooms vary and guests can choose to sleep in converted jail cells and dine in the former prison chapel.

Now, the building is unrecognisable from its past, with modern rooms, trendy decor, and chic rustic walls.

Could you brave a night at this place?

According to the Bodmin Jail Museum, Bodmin Jail has a dark history. 55 executions took place within its formidable walls, for crimes such as rape, murder, and stealing.

Eight of these were women who also had quarters within the prison.

Most of these executions were viewed by the public, and thousands travelled to witness the hangings.

The female prison was closed in 1911 with the remaining inmates being transferred to Plymouth. The number of male prisoners declined dramatically with the outbreak of World War One, and the last male prisoner left Bodmin Jail in July 1916.

The jail was finally closed in 1927 after which it was abandoned for decades and fell into ruin.

When architects began work on the building five years ago, the premise was covered in vegetation and bats had inhabited the space.

The experts decided to keep the original architecture of Bodmin but made modern upgrades to attract guests.

If all that’s got you excited to visit, you can start making bookings for February next year on the Bodmin Jail Hotel website.