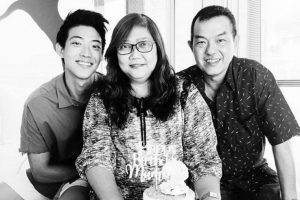 SINGAPORE – Local actor Benjamin Tan posted on Instagram on Sunday imploring his mother – currently in a coma – to wake up.

The 27-year-old, who recently starred in the Mediacorp drama My Guardian Angels, wrote in Chinese underneath a picture of him with his parents celebrating her birthday in 2018: “Mummy, don’t you hate it when I post pictures of you with your ‘triple chin’? I’ve just posted this, why don’t you wake up and scold me?”

He added: “Can you really bear to leave us behind? But if you’re tired… let us know. I will work hard, I will make you proud of me.”

He said in the post that doctors had told him his mother “might leave at anytime” but that he was not ready to face this and missed having her around the house.

The actor told The Straits Times through his manager that his 51-year-old mother was unconscious and needed life support when she was hospitalised on July 4. She was diagnosed with a blood clot pressing on her brain stem. Though she showed signs of improvement at one point, her condition later took a turn for the worse and she has since slipped back into a coma.

Tan, who is an only child, recently bought a silky poodle named Toki, which he referred to as his mother’s fur grandson in his post.

His previous post on July 8 hinted at troubles at home.

He said: “A lot of things in life happen for a reason, and sometimes entirely out of our control. The past week has been a crazy week for me as some family emergency happened.

“Yet, no matter how worried I am, I got to head to work as filming resumes and put on a smile.”