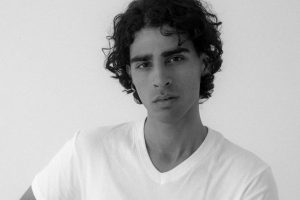 The name Medhi Hamadouchi may not mean much to you but anyone who’s set foot in central London this year may well recognize Hamadouchi’s face. At the beginning of January the actor plastered 5,000 posters around the capital featuring his headshot and a QR code leading to his website.

Despite being chastised by Westminster council (who he says sent him an email begging him to stop fly-posting) and, on one occasion, being chased by what he thinks was a police officer who caught him sticking up a poster, Hamadouchi’s self-publicity paid off: not only has he gone somewhat viral but he has even bagged representation after an agent spotted the poster and thought it was “genius.”

“He made good use of technology, it was a really nice headshot,” says Paul Byram, who signed Hamadouchi up to his eponymous agency 48 hours and one telephone call after seeing the posters.

The story is all the more remarkable given that Hamadouchi arrived in the U.K. from his native France just 10 days before Brexit (when the U.K. withdrew from the European Union) speaking nary a word of English and with just a few credits to his name. He began bartending while learning English before getting involved in some local theater productions as his confidence grew.

Impatient to move his career forward, he had the idea last spring to print out some headshots and paste them around town. “I was on my bed, I was like, ‘Oh my God, there’s so many actors in this industry, so many people,’ and I was thinking, ‘How can I just show who I am?’ Let’s say if I literally have done nothing in my life, I didn’t do acting at first, nothing, but if I show my face everywhere, my name, people will think ‘Who is this guy?’”

“So I was thinking about this idea, ‘Now how can I promote myself?’ and I had this revelation quickly. ‘Okay, you know what? Let me do some stickers of myself.’ I was like, if you will make it that means everything is possible.”

Hamadouchi first tested the idea out in New York, spending a week sticking up 850 posters around Manhattan and Brooklyn, before returning to London, where in September he redoubled his efforts. “I came back to London, I was [like], ‘Bro you need to show yourself more.’ I feel something with[in] me: I know that I can be an actor, I can have an agent, I can work, I can be in this part of this industry. So now I was like, I’m going to print 1,000 stickers. In September of last year, I stuck 1,000 stickers in London for two or three weeks, it was really hard for me.”

Then, in January, he decided to go even bigger, and printed 5,000 posters to put up around the capital. He said this time he had “so many issues.” First Westminster Council emailed him asking him to stop. And he says at one point he was followed by what he thought was a police officer in the middle of his fly-posting. “I mean, I’m not a criminal. I’m just promoting myself as an actor,” he says. “I ran away.”

Hamadouchi, who says he used to be very shy, studied biology in France before he was spotted by a model scout. A brief career in fashion followed before he pivoted to acting, taking improv classes and doing a small feature film. He says his career inspirations are Joaquin Phoenix, Christian Bale and Tahar Rahim.

Now that he’s landed an agent, what would his dream role be? “To be honest with you, I [would] love something quite dramatic. I’m quite open, because it just depends on the script. My dream would be to play a homeless [person] or a drug addict, someone with a lot of issues. Because at the end of the day, you know why I want to become an actor? It’s not for fame or money because I know one day I’m going to die. It’s just if some people can take some hope from me I would be so happy.”