Home » Lifestyle » After a rollercoaster ride, Moulin Rouge! cast is ready to party

After a rollercoaster ride, Moulin Rouge! cast is ready to party 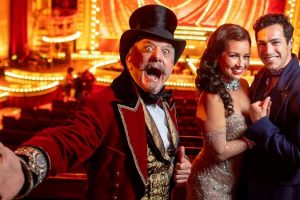 “I don’t think I can prepare for it,” says Simon Burke, of his big opening night this Friday. “It’s kind of emotional to even think about it. I’m a big sook anyway. When I go out there it’s going to be massive.”

Is that a glint of a tear in his eye, even at the thought of it? Any show production is a rollercoaster. But Moulin Rouge! The Musical, which fled its Sydney rehearsal room as the Delta outbreak bit, then had its Melbourne premiere cancelled as the lockdown spread south, has had a harder run than most. 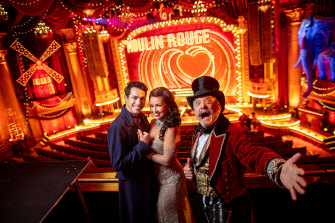 Now the end, or rather the start, is in sight. On Friday the first Australian audience will see the Tony award-sweeping show based on the hit Baz Luhrmann movie – and the cast can’t wait.

Burke, who plays impresario Harold Zidler, says the toughest moment for him was the day in July when he had one night to pack his bags in Sydney, load up the car and bolt for the border, with the show’s future suddenly thrown into question.

“But the high points absolutely outweigh the low,” he says. “Walking into this theatre for the first time in August, when we saw the set, the lights… I mean, nothing prepared any of us for this opulence, the detail, the care taken with the set and the costumes.”

He spins around proudly to show the detail on the back of his jacket: an embroidered windmill. 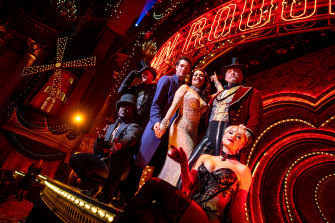 Moulin Rouge! cast pose on stage at the Regent.Credit:Eddie Jim

“This costume is ridiculous!”

Des Flanagan, who plays romantic lead Christian, says the hurdles in their path only made the cast stronger. In isolation, quarantine and lockdown, through many weeks of uncertainty, they swapped jokes on a WhatsApp group to keep each other’s spirits up. 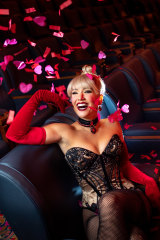 “All we could do was just laugh,” he says. “Of course our emotions were pretty heightened. All we had was each other.”

Alinta Chidzey, who plays the star Satine, agrees. “The cast is so strong together, we’re very supportive of each other and I think [going] through this time has bonded us even more. When we come on stage that energy is going to feed into the audience and everyone will respond to that.”

It was especially hard for Chidzey: she has a seven-and-a-half-month-old baby, and rehearsing a show inside a protective quarantine bubble with strict limits on who could come into her personal space was a huge challenge.

“That was definitely a difficult time, it was difficult on my partner during COVID looking after our baby and not having the support that we needed,” she says.

On opening night she’s going to “have so many butterflies and goosebumps”. Her first entrance, she says, “is the most spectacular one ever designed for music theatre.

“It’s jaw-dropping to see, and to experience, and adding an audience is going to be wild. I’m sure my heart will be beating 1000 times a second.”

Flanagan says he’s so ready for opening that he got emotional “just looking at the schedule and reading ‘performance one’.

“I can’t imagine what it’s going to be like for the audience. Everyone involved has so much weight to shed. And you’re going to be able to shed it.”

TV, movies, Find out the next TV, streaming series and movies to add to your must-sees. Get The Watchlist delivered every Thursday.