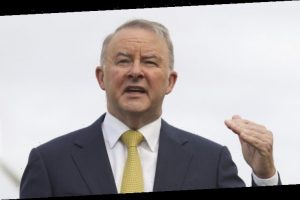 Opposition Leader Anthony Albanese will channel the Pope by telling Christian organisations he believes the values of Labor and the church overlap with their vision to rebuild Australia following the coronavirus pandemic.

Mr Albanese will use a speech to the Church Community Restoration Project on Monday to say Australia “shouldn’t walk past those who are in need or suffering” as it emerges from the first recession in 30 years and the deepest financial crisis since the Great Depression. 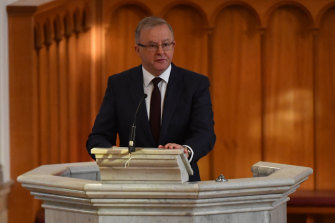 Labor leader Anthony Albanese is trying to reconnect the party with Christian communities.Credit:Getty

The project is a group of faith-based organisations, including the Bible Society, Catholic Social Services Australia, Wesley Mission and World Vision, which earlier this month wrote to the Morrison government warning the economic and social fallout of COVID-19 will echo across generations.

Mr Albanese will tell the gathering, facilitated by the Australian Christian Higher Education Alliance, that “we’re all in this together” cannot be “just be an empty mantra” but “a guiding philosophy”.

“Ultimately, it boils down to a fair go for all. It is a sense of fairness that Jesus’ teaching radiates throughout the books of the New Testament,” Mr Albanese will say according to the draft notes of the speech.

“And it informs the powerful and compelling tradition of Catholic social teaching.”

Labor has made employment and social inequality a key platform as the party attempts to return to government after three successive election defeats.

Mr Albanese has sought to re-engage with Christian communities in the past 12 months after a review of Labor’s disastrous 2019 election loss found the party would be wise to reconnect with people of faith on social justice issues and emphasise its historic links with mainstream churches.

The Labor leader has described himself as a cultural Catholic, courtesy of his late mother Maryanne, and attended St Joseph’s Primary School in Camperdown and St Mary’s Cathedral College in Sydney.

While no longer a churchgoer, his past association and schooling had reinforced the values of social justice and equal opportunity.

Quoting Pope Francis, Mr Albanese said there was a “powerful overlap between those values and Labor values as we work on how to get through this pandemic”.

“What we have is a rare opportunity – in all likelihood a once-in-a-lifetime chance – to shape the future and emerge from the pandemic as a better, fairer nation,” he said.

Mr Albanese said US President Joe Biden, too, had appealed to Americans whose vote was guided by religious values during his tilt at the White House and said the “common good is what we must all strive for”.

“If there is a positive to have come out of this pandemic, it’s that when push came to shove, the fundamental truth of this spilled across political and ideological lines as surely as a river breaking its banks,” he will say.

“We have seen even some of those political parties that are more instinctively tilted towards individualism setting aside their ideology as an indulgence ill-suited to the current reality.

“It has been superseded by the spirit of inclusiveness. Of togetherness. Of compassion.”

Catch all the day’s headlines

At the end of each day, we’ll send you the most important breaking news headlines, evening entertainment ideas and a long read to enjoy.  Sign up to The Sydney Morning Herald’s newsletter here, The Age’s here, Brisbane Times’ here, and WAtoday’s here.