ALEX BRUMMER: There are costs to Jeremy Hunt's statement 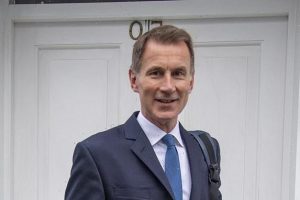 ALEX BRUMMER: The spirit of adventure has been smashed on the rocks of austerity… There are costs to Jeremy Hunt’s statement that all of us will pay

Britain’s short-lived dash for growth has been smashed on the rocks of the financial markets and budgetary orthodoxy.

Jeremy Hunt, in tandem with the Treasury, has at a stroke condemned Britain to a more austere age, ruthlessly discarding any tax measures which smelled of adventure.

The markets, at least, have been appeased for now.

The pound’s value is on the rise and the interest-rate yield on government bonds, the key to mortgage rates, has been suppressed. But there are costs to Hunt’s statement yesterday – ones that all of us will pay.

The new Chancellor has limited the timespan of the energy-price guarantee. From April 2023, the cap on average bills of £2,500 per household will be replaced by something almost certainly less generous. That can only be a blow to the confidence which drives consumer spending.

Hunt has revived the deadening spirit of one of his predecessors as Chancellor, Philip ‘Spreadsheet’ Hammond, after the disastrous reaction of global financial markets to the mini-Budget.

He may have felt he had no choice. After all, the sudden rise in gilt yields came close to wrecking not only the UK’s system of defined benefit pensions but also the housing market, reeling from soaring home loans.

Jeremy Hunt (pictured this morning), in tandem with the Treasury, has at a stroke condemned Britain to a more austere age, ruthlessly discarding any tax measures which smelled of adventure

Another factor in Hunt’s calculations would have been the criticism levelled last week at short-lived chancellor Kwasi Kwarteng and the Governor of the Bank of England Andrew Bailey during the International Monetary Fund’s meeting in Washington.

They were told countless times that their plans to cut taxes so dramatically at a time of rising interest rates and cost of living crisis could lead to disaster.

It was a sobering experience for them both and the most decisive overseas intervention in the British economy since 1976, when Labour Chancellor Denis Healey had to go cap-in-hand to the IMF for a huge loan during the sterling crisis.

Back then, the humiliating episode ushered in an era of higher taxes, lower spending and stricter control of credit. And as someone who reported on those dramatic events I find the parallels with today ominous to say the least.

The truth is that when confronted by a falling pound and choppy markets for government bonds and shares, the Treasury and financial establishment only has one arrow in its quiver. It is to raise taxes, cut spending – and impose cruelty on the British people.

What is so frustrating is that this has proven, over the decades, to be such an enemy of growth and productivity. 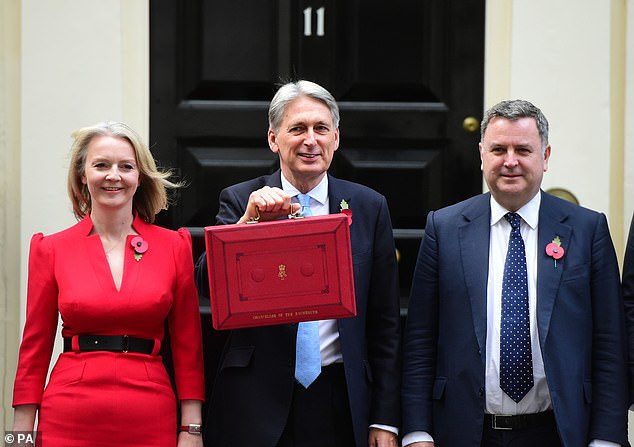 Hunt has revived the deadening spirit of one of his predecessors as Chancellor, Philip ‘Spreadsheet’ Hammond (pictured with Liz Truss and Mel Stride in 2018), after the disastrous reaction of global financial markets to the mini-Budget

As an early, if chastised, enthusiast for the now-destroyed Truss-Kwarteng experiment I cannot be anything but disappointed about the outcome.

If only these doomed political partners had not been so headstrong and let the Office for Budget Responsibility mark their homework at the outset, disaster could have been averted.

The UK has a better measure of debt to national output (GDP) than all its G7 advanced-country partners bar Germany. The OBR may actually have found that there was a little headroom for some of the boldness and growth envisioned by Truss and Kwarteng.

In contrast, Hunt’s joyless measures will reclaim a massive £113.5billion of taxes for the Treasury over the next five years. This may restore Britain’s reputation on the markets for stability, but it will do nothing to encourage overseas investment in our great life sciences, or our creative, aerospace, financial and high-tech industries. 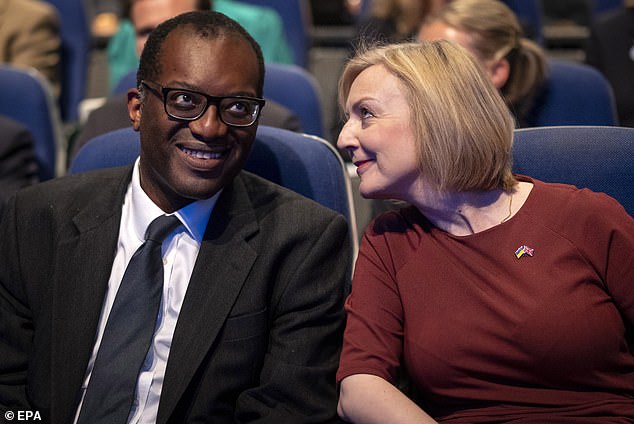 As an early, if chastised, enthusiast for the now-destroyed Truss-Kwarteng experiment I cannot be anything but disappointed about the outcome

The restoration of a headline rate of corporation tax of 25 per cent from next year is in danger of making us highly uncompetitive with many of our trading partners. Hunt has even chosen to remove some of the smaller measures which might have made a real difference in boosting output.

The proposal to attract foreign visitors to Britain by offering them VAT-free shopping, for example, had been welcomed by retailers everywhere but has now been ditched.

Thankfully the Chancellor has not axed the idea of tax and regulation-free investment zones – for the time being. But unless you have dynamic, driven leadership in a country where growth is considered paramount, it is hard to see that experiment working.

Ordinary citizens will of course welcome the end of a near-month-long roller-coaster ride. But we all now face a gruelling winter followed by the drudgery of austerity and high taxes –and without any of the spirit of adventure that could have boosted Britain towards a bright and dynamic future.