Alex Rodriguez all business in Miami amid Bennifer’s gym frolics 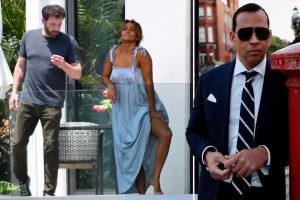 Jennifer Lopez gets Ben Affleck to hit the gym in Miami

Alex Rodriguez was all business in Miami on Monday.

While his ex, Jennifer Lopez, has been seen frolicking around town with Ben Affleck — Rodriguez was spotted at a three-hour business meeting with executives from his new NBA team, the Minnesota Timberwolves.

Spies said that A-Rod — who once wore Yankees pinstripes — opted for a pinstriped blue power suit at new Coral Gables hotspot Forte while pow-wowing with his new NBA co-owner Marc Lore and some Timberwolves execs.

Sources exclusively tell Page Six that Rodriguez is currently focusing on his family, and business — and not his love life. Said a pal: “He is interested in his kids, baseball, and business.”

When pressed, the source said the star isn’t dating.

Miami spies also told Page Six that there was an event going on Monday at Forte for Florida Gov. Ron DeSantis, and that Rodriguez stopped by on his way out of the eatery to have a coffee with the pol.

“It was coincidental,” said a source close to A-Rod. “He had no idea there was a fundraiser.” But, “Alex knows him,” the source said. DeSantis was the captain of his Yale baseball team, and was the team’s Rookie of the Year in 1998. He’d also played in the Little League World Series as a Florida youth.

“He’s always been a big fan of Alex,” said an insider. “They know each other from baseball. Alex stopped by for a coffee, and they talked baseball for about 15 minutes.”

A-Rod, 45, was then seen exiting the new restaurant from chef Adrianne Calvo in a suit and shades.

Lopez has reportedly been working in Miami as well, but she’s also been hanging with another ex-fiancé, Affleck.

Just about two weeks after Lopez, 51, and Affleck, 48, returned to LA from a trip to Montana — the allegedly rekindled exes reunited in Miami, and have been spotted staying at a rented private residence and hitting the gym together.

The alleged couple gave their lips a workout while they were at it and were spotted “kissing between sets” at Anatomy Fitness.

The once-engaged couple postponed their nuptials in 2003 and permanently split in January 2004.

Lopez and Rodriguez ended their engagement in March, we exclusively reported, but they didn’t confirm their split for another month — telling NBC’s “Today,” “We have realized we are better as friends.”

A-Rod recently posted on Instagram that he’s “about to step into a new beginning” of his life.