All the Details on Orlando Bloom & Katy Perry's Hawaiian Getaway 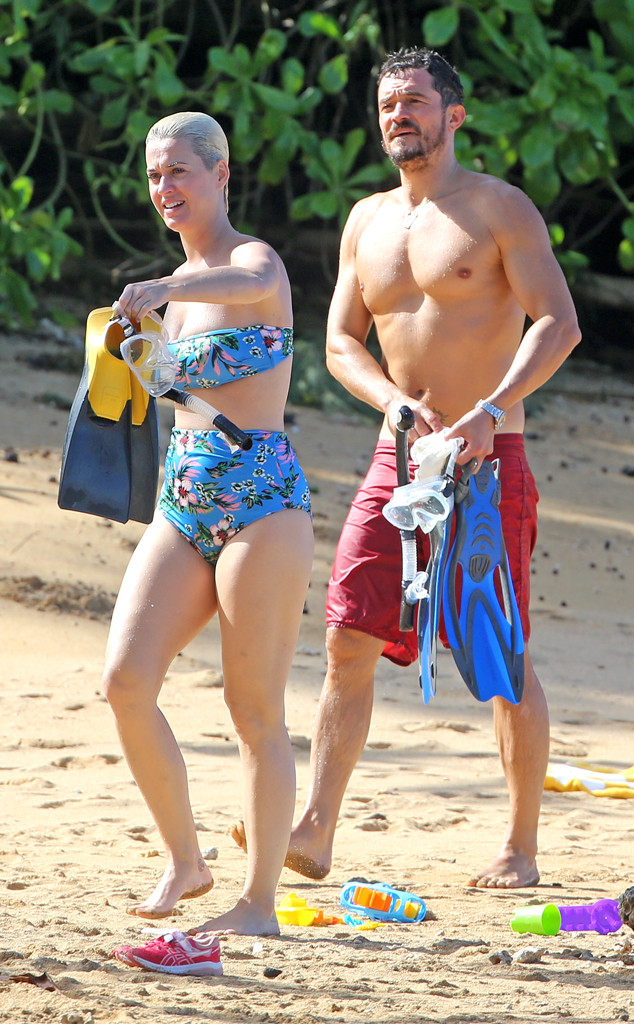 Orlando Bloom and Katy Perry are living a teenage dream in Hawaii.

The actor and singer took their families on the ultimate getaway to the beaches of Hawaii. In photos taken of the A-list couple, they are seen setting up camp on the shore of one of the island’s nicest beaches, where they were joined by their dogs and a few family members.

While the Pirates of the Caribbean star took a quick dip in the warm waters, Katy lounged by the pups on their towels and sipped on a drink. For the outing, Katy wore a blue two-piece swimsuit, with high-waisted bottoms and a strapless top.

As for Orlando, he wore red swim trunks and a white bucket hat. He was, of course, shirtless, because who wants tan lines?

An eyewitness tells E! News that the couple “spent several days on the island of Kauai just before Christmas.” While on the island they rented a house, where they stayed with Orlando’s son Flynn, as well as Orlando’s mom.

According to the observer, Orlando, Katy and Flynn went snorkeling, swimming and hiking around various tourist hot spots on the island, like Wailua Falls.

“They have been on the island together several times and love coming back,” the insider shares. “They know their way around and always visit their favorite spots.”

Moreover, the witness says the pair, who has dated for over two years, looked like they were having a “great trip and are very in love.”

“Katy was wonderful with Flynn and seems very close to Orlando’s family. They all got along great,” the insider says.

keeping with the dog photo theme…I got nothin ?

keeping with the dog photo theme…I got nothin ?

This is not the first time the pair spent the holidays with each other’s family. In 2016 Bloom spent Christmas with Katy and her family, when they played a messy game that involved pie.

And this year, Katy totally splurged on her Christmas gift when she bought herself a date with one of the most sought after men in Hollywood: her boyfriend. She paid $50,000 for a night out with her beau at the One Love Malibu charity event in December. A motorcycle ride and lunch date is just a small part of the date night that Orlando promised for the lucky winner. The girl who came in second place to Katy placed a bid of $20,000.

I guess Orlando is the one that got away for the girl who almost paid $20,000.