All the singers and celebrities performing at Joe Biden’s inauguration 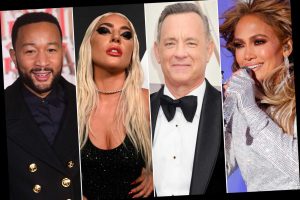 Security concerns and a shift to streaming events may have overshadowed the celebratory mood on Inauguration Day 2021. But the swearing-in of President-elect Joe Biden and Vice President-elect Kamala Harris will still bring star-studded spectacles on Jan. 20.

The usual packed, in-person celebrations in Washington, DC have been sidelined by the coronavirus pandemic and the potential for further protests in the wake of the violent Jan. 6 Capitol siege by supporters of outgoing President Donald Trump. In their place will be an hours-long schedule that embraces the theme of “America United” and features plentiful performances by socially-distanced A-list celebrities.

While President Trump does not plan to attend the event, outgoing Vice President Mike Pence is expected to be on-hand when Biden and Harris take center stage on the steps of the Capitol.

Here’s what — and who — to expect throughout the day.

“Our White House: An Inaugural Celebration for Young Americans” begins at 10 a.m.

Fur-real: This first-ever livestream for the younger set will include a Nickelodeon-produced segment on presidential pets, as Biden and family welcome their own German shepherds, Chance and Major — and possibly a cat — to the White House.

However, pets won’t be the only stars of the show.

The 2½-hour program kicks off at 10 a.m. and will stream on bideninaugural.org/youth, the inauguration’s YouTube channel, and platforms supported by Nickelodeon, Discovery Education, Amazon Prime Video, PBS NewsHour and various ABC station apps.

Call it pop and circumstance. Beyond the oaths of office and inaugural address, the official swearing-in of Biden and Harris (which will begin between 11 a.m. and noon) will also welcome a glitzy gathering to give the virtual mood a boost.

The multiple Grammy winner will perform the national anthem, a feat she previously brought to the 2016 Super Bowl. It could be a great start in 2021 for Gaga, 34, who had a star-spangled year in 2020 with the critically-acclaimed album “Chromatica,” released in May, and the dance single “Rain on Me,” a celebratory collab with Ariana Grande.

The country music singer, a Republican, will again cross party lines to bring some twang to the presidential transition. “This is a great day in our household,” Brooks said in announcing his participation on Monday. “In our household, this is not a political statement; this is a statement of unity.” The “Friends in Low Places” singer, 58, performed at President Barack Obama’s inauguration in 2009.

There’s no waiting for tonight. While details about her performance have not been released, expect “Jenny from the Block” to get loud about her support for the incoming administration. Expect some heat, but perhaps a little less than she showed off in her Super Bowl 2020 halftime show alongside Shakira.

The 22-year-old Gorman, who was named the country’s first Youth Poet Laureate in 2017, recently tweeted that she is both “honored” and “excited” to give a reading during the program.

Crowd restrictions will transform the traditional presidential escort from the Capitol to the White House into a virtual event kicking off at 3:15 p.m. “The parade will celebrate America’s heroes, highlight Americans from all walks of life in different states and regions, and reflect on the diversity, heritage and resilience of the country as we begin a new American era,” the Presidential Inaugural Committee said in a statement.

He’s not the president, but he played one on TV. The 60-year-old “Scandal” alum will host the event following the swearing-in.

The 58-year-old comedian, former “Daily Show” anchor and champion of the 9/11 Victims Compensation Fund will help lead the virtual parade.

The one-hit wonders will reunite after more than two decades apart to perform their 1998 ear-worm hit, “You Get What You Give.” The song holds a special place for Joe Biden, who has said it was his late son Beau’s “theme song” during his battle with brain cancer. Beau died of glioblastoma in 2015.

Music man Cassidy, 39, will bring his popular Twitch series “Pass the Mic” to the inaugural masses with some help from Earth Wind & Fire, Nile Rodgers, Kathy Sledge (of Sister Sledge fame), the Trans Chorus of Los Angeles, the Washington Chorus and the Triumph Baptist Church Choir. Cassidy also will make a second inaugural appearance — along with Ozuna and Luis Fonsi — during the “Celebrating America” prime-time special Wednesday night (see below).

The 36-year-old “Rise Up” singer will be accompanied by 9-year-old figure skater Kaitlyn Saunders as she performs her Grammy-nominated 2015 song.

The skateboarding “Ocean Spray Guy” took TikTok by storm with his viral lip-sync to Fleetwood Mac’s “Dreams.” Who knows what he’ll do, but we’re sure it will be pretty chill.

“We have witnessed countless heroes this past year step up to the front lines and serve their fellow Americans, so we are telling their stories, spreading their collective light, and celebrating the best of our country and its people with this prime-time program,” said Presidential Inaugural Committee CEO Tony Allen in a statement.

Among those heroes will be Sandra Lindsay, an ICU nurse at Long Island Jewish Medical Center in Queens, who was the first person in the country to receive Pfizer’s COVID-19 vaccine on Dec. 14, 2020.

The program will air live from 8:30 to 10 p.m. ET on ABC, CBS, CNN, NBC and MSNBC. It will also stream live on YouTube, Facebook, Twitter, Twitch, Amazon Prime Video, Microsoft Bing, NewsNow from Fox and AT&T’s DirecTV and U-verse.

Who better to host the show than the 64-year-old “News of the World” star and two-time Oscar winner? After testing positive for COVID-19 early last year, “America’s Dad” and his wife, Rita Wilson, became two of the most high-profile faces of the virus — and its most visible symbols of strength.

The soul group was nominated for Record of the Year, Album of the Year and Best American Roots Performance for the 2021 Grammy Awards, which were rescheduled and will now air on March 14 due to the coronavirus pandemic.

The “Hamilton” and “In the Heights” creator, 41, won’t give up his shot at celebrating the inauguration when he recites “a classic work” during the program.

The 58-year-old rocker’s band released its 15th studio album last fall — the aptly titled “2020.” As Bon Jovi told The Post: “I really realized the title had a much deeper meaning … and I was bearing witness to history.”

Clemons, 26, is surely happy to be in the inaugural lineup: His 2020 debut record, “Happy 2 Be Here,” was nominated for Best R&B Album for the upcoming Grammys.

No word on what the group will perform, but we’re hoping for a version of the song frontman Dave Grohl penned with a 10-year-old UK fan who challenged him to a drum battle last summer.

The 28-year-old singer’s appearance is a timely one: She tweeted that her heart was “broken” and she was “in the studio working on something special” following the Jan. 6 attack on the Capitol. In October, during the run-up to the presidential election, she released a political track titled “Commander in Chief.”

The “Born in the USA” legend took a much-needed nostalgia trip with his fall 2020 album, “Letter to You,” which was filled with a sense of loss and longing — but also comfort for a soul-crushing year.

It makes sense for Biden’s people to sign up Timberlake, who is clearly a fan: The “SexyBack” singer surprised a group of campaign volunteers during a Zoom call before Election Day. During the sessions he called Kamala Harris “the coolest human on Earth” and saluted the shocked volunteers.

Washington (“Scandal”) and Longoria (“Desperate Housewives”) “will introduce segments throughout the night ranging from stories of young people making a difference in their communities to musical performances,” according to an inaugural committee press release.

The 7-foot-2 NBA Hall of Farmer, 73, is the founder and chairman of Skyhook Foundation, which aims to bring STEM curriculum to underserved communities. He was awarded a Presidential Medal of Freedom by then-President Obama in 2016.

The 51-year-old founder of World Central Kitchen has worked with his WCK team to serve meals to National Guard troops and others helping to secure the Capitol for the inauguration.

Labor leader Huerta, 90, was co-founder — along with Cesar Chavez — of the National Farmworkers Association (later known as the United Farm Workers). The 2012 Presidential Medal of Freedom honoree coined the Spanish phrase “Sí se puede” — which translates to “Yes, we can” and was co-opted by President Barack Obama for his campaigns.

A career Major League Baseball worker, the 52-year-old general manager of the Miami Marlins is the first woman to serve in that position for an MLB team.

The celebration doesn’t end on Wednesday night. At 10 a.m. Thursday, a virtual prayer service will kick-off at Washington National Cathedral and will stream on both the inauguration’s and the cathedral’s web sites.

The program was organized to “mark the beginning of a new national journey that restores the soul of America, brings the country together, and creates a path to a brighter future,” according to a press release.

Among the performers will be:

Fans will have a chance to again be lifted up by the 39-year-old singer, who had to postpone a June 2020 Radio City Musical Hall concert due to the COVID-19 crisis.

The two-time Grammy-winning gospel group performed a moving version of “Is My Living in Vain?” at the 2018 funeral for R&B legend Aretha Franklin.

The full schedule of events is available at the inaugural web site.