November 11, 1926, 92 years ago today, was the day highway officials green-lighted plans for the future Route 66. Completed in 1928, U.S. Route 66 started in Chicago, and stretched west more than 2,400 miles across the great southwest to Los Angeles. 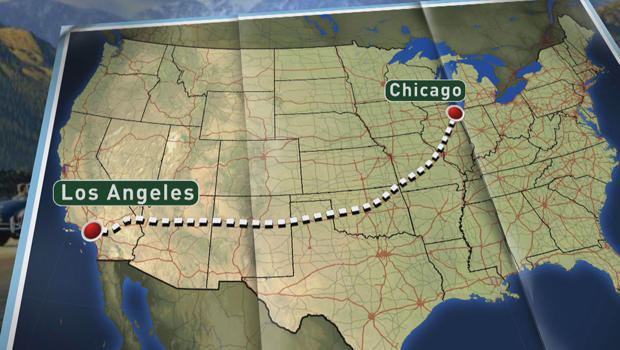 Route 66 connected eight Midwest and Western states as its stretched 2,400 miles from Chicago to Los Angeles.

In the 1930s, refugees from the Oklahoma “Dust Bowl” followed it to begin new lives in California, prompting John Steinbeck to christen it “The Mother Road” in “The Grapes of Wrath.”

Over the years, the Mother Road gave birth to distinctive restaurants and motels, and roadside attractions of every sort – all to the accompaniment of that classic song, best sung perhaps by Nat King Cole:

In the 1960s, “Route 66” became a popular CBS TV-series featuring a pair of rootless young men (played by Martin Milner and George Maharis) roaming America in their flashy Corvette.

But over time, the growing Interstate Highway System bypassed and replaced more and more stretches of the old Mother Road, which was finally decommissioned in 1985.

Fortunately, sections of the old road – mostly empty and in some places overgrown – remain, the Mother Road turned Memory Lane.