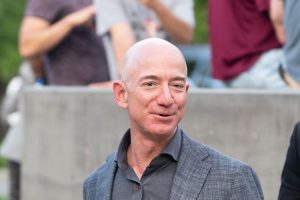 Jeff Bezos was always curious, even as a child when he conducted computer experiments from his parent’s garage. After working in finance for many years, he quit his job in 1994 to establish an online bookstore to join the pre-internet boom phase. His fascination with technology led him to create Amazon, one of the world’s most valuable companies today. Through his various business ventures and investments, Bezos has amassed a $140 billion fortune and become the third richest man in the world. While the mogul maintains a relatively private life, he does spend a few million on buying expensive real estate properties, collecting artifacts, and adding costly private jets to his collection.

Along with cars and a multi-million dollar yacht, Jeff Bezos owns two private jets worth $150 million. With exceptional renovations and a personal touch, Bezos has added comfort and reliability to his private jets. Regarded as one of the best business jets in the world, it is no surprise that Bezos owns two flights to travel to work or take a vacation with his family and friends. A luxurious home in the skies, let’s look at Jeff Bezos’ insane $150 million private jets.

Jeff Bezos has multiple private jets that he uses to travel long-distance journeys in luxury. His most expensive jet is a Gulfstream G50 ER that comes with a $70 million price tag, but the amount hikes with customizations, as Bezos’ jet is currently worth $75 million. Owning two Gulfstream G50 ERS planes, they are registered under the names N758PB and N271DV. As mentioned by Super Yacht Fan, the private jet is registered under Poplar Glen LLC, a private company owned by Bezos. Before buying the expensive jet, the mogul also purchased a Boeing Field Hangar in a private location for $5.5 million to house the stunning Gulfstream jets.

Produced by Gulfstream Aerospace, the Gulfstream G50 ER is a twin-engine private jet, while the ER stands for Extended Range. Bezos’ business aviation jet has the stomach for long journeys with its maximum range of 7,500 NM and a maximum mach of 0.925. More than 470 Gulfstream G-series aircraft are in service and have achieved more than 120-speed records. According to Gulfstream, one of the reasons why the model is popular amongst the richest is that the Gulfstream G50 ER holds the record for traveling the farthest fast flight in the history of business aviation.

Inside the Gulfstream jet, a spacious luxury offers a getaway amongst the clouds. With a seating capacity of thirteen people, it can sleep six at a time. The plane is divided into three living areas: a forward galley with the crew compartment, a seating area, and an aft galley. Designed with comfort in mind, the thirteen seats designed for passengers are hand-crafted for a relaxing journey and come with added flexibility as they convert into beds to take a quick break.

With the G650 series, Gulfstream has inculcated innovation with technology to increase the efficiency, speed, and range of every journey. For example, with the fly-by-wire technology, the aircraft is stabilized and offers flight control inputs through a process system, as reported by TheRichest. In addition, the exclusive Gulfstream PlaneView II deck notably shows streamlined displays to reduce the pilots’ workload for enhanced safety. These safety features have earned the model the Robert J. Collier Trophy by the United States National Aeronautic Association.

The private jet is the perfect airborne retreat that innovates with cabin pressure. The Gulfstream flight has a clean air system to ensure that 100% fresh air is delivered to the passenger with air-ionizing technology, which neutralizes viruses and allergens. In addition, Bezos uses the private jet for his regular transport. In 2021, he was snapped arriving in Los Angeles with his partner Lauren Sanchez, as noted by Page Six. Bezos is notably seen taking a red-eye flight, and the Enhanced Flight Vision System helps the pilot navigate during late-night flights to avoid unfortunate runway overruns.

Jeff Bezos is not the only personality who trusts Gulfstream for his long-distance and safe travels. Other notable celebrities who own the Gulfstream private jets include Steven Spielberg, Dwayne Johnson, Elon Musk, Tyler Perry, Mel Gibson, Nicolas Cage, and Tom Cruise. Before purchasing the Gulfstream jets, Jeff Bezos was the proud owner of the Dassault Falcon-900EX, a twelve-seater luxury jet, a 1994 make. However, he sold it in 2016 for an undisclosed amount.

Jeff Bezos has added luxury aviation to his collection, similar to other CEOs and celebrities worldwide. His private jet is a standout Gulfstream charter as it is regarded as the fastest business jet and offers many amenities built to create a seamless travel experience. The fuel-efficient jet is the best way to travel in the air.

READ NEXT: Inside Dr. Dre’s $40 Million Mega Mansion In Brentwood