Home » Lifestyle » An estranged son, a legal battle with a live-in lover, and a mogul who wanted to 'live forever': Meet the heirs to the ViacomCBS empire 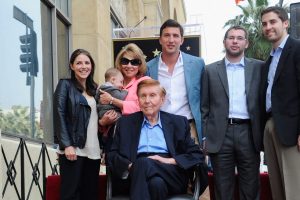 Sumner Redstone's media empire dates back to the 1950s. 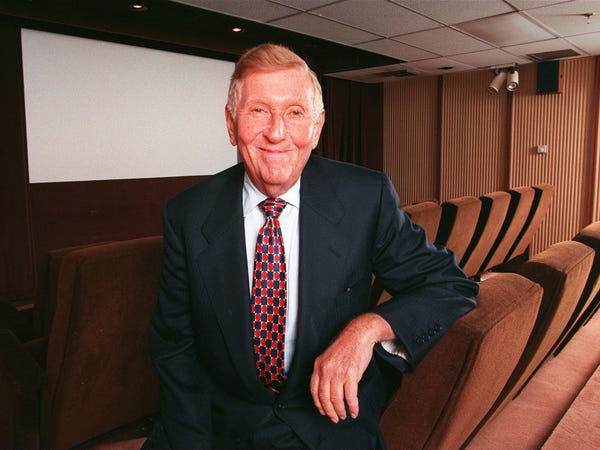 Redstone was born in Boston, Massachusetts, in 1923.

He enrolled at Harvard and graduated in three years, later becoming a US Army cryptography during World War II. After the war, he returned to Harvard for a law degree.

He saw success as a lawyer, serving as a special assistant to then Attorney General Tom C. Clark and working as a partner at a law firm.

In 1954, Redstone took over  National Amusements, a private theater chain that was started by his father. He grew the business, and by the 1980s he was using it as collateral to bid for a cable, broadcast, and entertainment business that had been spun off by CBS in the late '70s: Viacom, home of brands including MTV, Showtime, and Nickelodeon. A little over a decade later, in 1999, Redstone bought CBS itself, in a $37.3 billion deal.

Although National Amusements now controlled both Viacom and CBS, the businesses remained separate for decades afterward, and in the 2010s their potential merger became embroiled in a high-stakes legal battle, with a nonagenarian Redstone at the center of it.

Into his late 80s and 90s, Redstone vowed to retain control of CBS and Viacom, at one point telling Larry King on CBS: "I have no intention of retiring or dying. I could live and work forever."

He was the executive chairman of CBS and Viacom until 2016, and chairman emeritus after that. He notably remained involved deeply involved in the business in his old age — in 2018, he reportedly primarily participated in business dealings by communicating through an iPad equipped with audio clips of him saying "yes," "no," and "f— you," according to CNBC.

At its peak, Redstone's empire was worth $40 billion. Today, it's worth $16 billion. The company's holdings include MTV, Nickelodeon, Comedy Central, and Paramount Pictures. 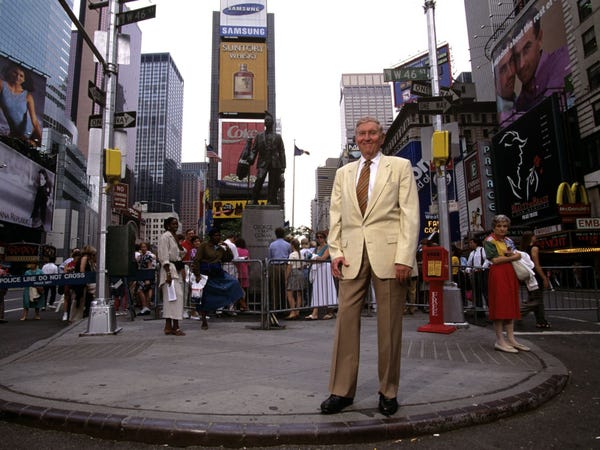 "ViacomCBS will remember Sumner for his unparalleled passion to win, his endless intellectual curiosity, and his complete dedication to the company," Viacom President Bob Bakish wrote in a Wednesday statement.

Redstone was known as a ruthless litigator and negotiator. His New York Times obituary noted as much. "I believe in taking every penny off the table," Redstone wrote in his 2001 autobiography.

Wall Street Journal reporter Keach Hagey's 2018 book, "The King of Content: Sumner Redstone's Battle for Viacom, CBS, and Everlasting Control of His Media Empire," chronicled Redstone's rise and apparent obsession with immortality and continued control of his empire. His later years were plagued by questions about his health and faculties.

Redstone is survived by his son, Brent Redstone, and daughter Shari Redstone, who is now in control of the family dynasty. They are children from his first marriage to Phyllis Raphael.

Here's a breakdown of who's who in the Redstone family:

Shari Redstone, Sumner's daughter, is now the steward of the Redstone media empire. 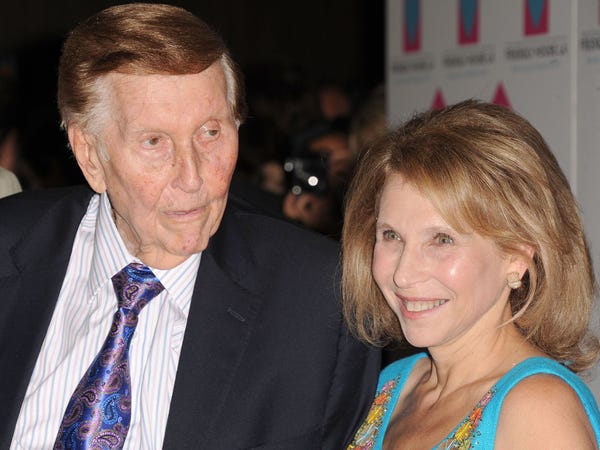 Variety reported that all of Redstone's stock would be left to his grandchildren, which was disclosed during their divorce settlement.

In 2007, after reports surfaced that he was reconsidering his succession plan and wanted to hang onto his power, Redstone publicly addressed his daughter's position and said in a letter to Forbes that his children had nothing to do with building his empire.

When Redstone offered to buy out Shari's 20% stake in National Amusements, she rejected the $1 billion offer. Their relationship appeared to recover and her power player status rose in the late 2010s.

In February 2016, 92-year-old Redstone gave up his chairmanships of CBS and Viacom after a court-ordered examination by a geriatric psychiatrist.

Shari later won a major victory in August 2019, Business Insider's Ellen Cranley reported, when the boards of CBS and Viacom announced a $12 billion deal that would reunite the companies into a new entity, ViacomCBS, with Shari as chairwoman.

Now, as chairwoman, she owns 20% of National Amusements and is one of the seven trustees overseeing Sumner's 80% voting stake.

She has three children with ex-husband Ira Korff, a rabbi. Each of their children are involved in the family business.

"My father led an extraordinary life that not only shaped entertainment as we know it today, but created an incredible family legacy," Shari Redstone told Variety in a Wednesday statement. "Through it all, we shared a great love for one another and he was a wonderful father, grandfather and great-grandfather. I am so proud to be his daughter and I will miss him always."

Redstone's son, Brent, was estranged from his father. 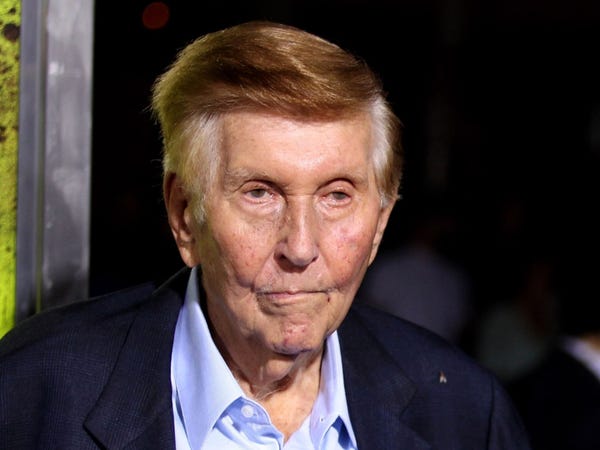 Brent Redstone, 69, sued his father for his share of the family fortune in 2006, saying that Sumner preferred Shari.  He was 56 at the time.

They settled the lawsuit. Redstone successfully bought out his son's shares of the family business for roughly $240 million.

Brent has has two daughters, neither of whom are involved in the family business. One, Keryn Redstone, was later a party in a lawsuit brought by one of her grandfather's ex-lovers (discussed below).

At one point, Redstone's will included two live-in girlfriends. 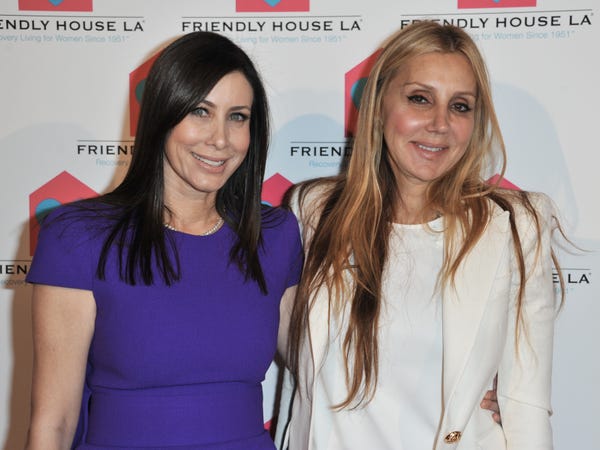 Redstone's final years saw multiple lawsuits involving jilted lovers. He had two longtime live-in companions in the 2010s, socialites Manuela Herzer and Sydney Holland. They were both at least 40 years younger than him.

Redstone was known to be living with the two women in his Beverly Park mansion after he divorced his second wife, Paula Fortunato, also about 40 years his junior. They were married from 2002 to 2009.

In 2015, after Herzer and Holland came to no longer be living with Redstone and no longer in his will, while Herzer was removed as Redstone's health-care proxy, Herzer filed a lawsuit, seeking to be reinstated as health-care proxy. Redstone had provided them both with about $150 million in cash and assets over the previous five years, according to Variety.

Herzer was never reinstated, and the suits ultimately settled. Herzer paid Redstone $3.25 million in the settlement.

By December 2018, Redstone was formally ruled to be incapacitated by Los Angeles County Superior Court and given a guardian to protect his legal interests. The resolution of this legal case also marked the point when Shari reemerged as a key figure in Sumner's life.

The main beneficiaries of Redstone's trust are said to be his five grandchildren. 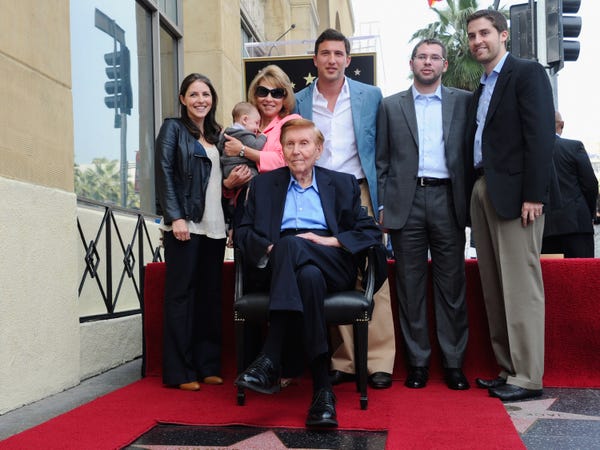 Shari has three children, Kimberlee, Brandon, and Tyler. All three are involved with National Amusements.

Tyler is one of the seven trustees that now controls Sumner's 80% stake in National Amusements, along with his mother, the Wall Street Journal reported in 2016. Brent's two daughters, Keryn and Lauren, are also beneficiaries of the trust. Neither have roles in the family business.

The trust has also been the subject of legal battles involving corporate executives. Dauman and former Viacom Director George Abrams were removed from the trust in 2016, after which they sued for reinstatement. Their suit challenged Sumner's mental capacity and asserted that he was being manipulated by his daughter, which she denied.

END_OF_DOCUMENT_TOKEN_TO_BE_REPLACED

END_OF_DOCUMENT_TOKEN_TO_BE_REPLACED
We and our partners use cookies on this site to improve our service, perform analytics, personalize advertising, measure advertising performance, and remember website preferences.Ok