Home » Lifestyle » An Ode To Joy across the globe

An Ode To Joy across the globe 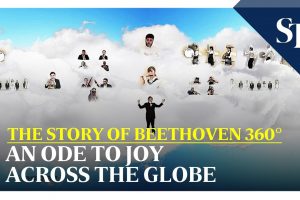 Few tunes are as celebrated as Beethoven’s Ode To Joy. In honour of the composer’s 250th birth year anniversary, the work will be brought to life once more on International Friendship Day today.

Led by Singapore’s Wong Kah Chun, chief conductor of the Nuremberg Symphony Orchestra, the virtual performance, Beethoven 360°, brings together a cast of musicians from across 25 nations performing music from the renowned German composer’s Ninth Symphony.

Pieced together with digital submissions by instrumentalists and singers from music institutions worldwide, the show also brings together more than 1,000 participants as part of a global campaign for a singalong in the Ode To Joy segment.

For postgraduate music student and Beethoven 360° participant Goh Mok Cheong, 24, today’s premiere is a rare chance to share his passion with his family.

The bassoonist has trained in music for 11 years and is a freelance musician. He joined the project in May after working with Wong on a similar project in April.

Says Mr Goh: “My parents do not have a musical background, but Ode To Joy will still be relatable to them. More than just a Covid-19-related virtual performance, this has given us the opportunity to adapt and put across a message of solidarity together.”

Mr Arkadiusz Czopor, managing director of information and communications technology firm T-Systems South Asia, which is a platinum sponsor of the project, says the concert “builds links with technology that allow us to reconnect through the beauty of Beethoven’s music”.

“We could easily identify with the project and hope that it offers a small token of relief to musicians in Singapore and beyond at a time when artists worldwide are struggling with the effects of the pandemic,” he adds.

The performance is also a step forward in deepening cultural ties between Singapore and Germany.

The show propels the annual German-Singaporean open-air concert, Beethoven Im Garten, into the virtual world for listeners from across the globe to enjoy from the comfort of home.

Presented by the German embassy in Singapore and the Foundation for The Arts and Social Enterprise with funding support from sponsors including Singapore’s National Arts Council (NAC) and the Federal Foreign Office of Germany, Beethoven 360° is the first partnership of its kind between a foreign embassy and a local cultural institution since the outbreak of the pandemic. The performance is also part of NAC’s #SGCultureAnywhere campaign.

German Ambassador to Singapore, Dr Ulrich Sante, says the idea for a concert was sparked by his meeting with Wong and the mutual understanding that there was a niche audience that was appreciative of classical music.

Dr Sante says the previously outdoor concert, with people of different nationalities sitting together enjoying music, was an inspiration.

“Not only as a diplomat but as a human being on this globe, that is what I think this globe needs, such a way of communicating with each other without any prejudice,” he adds.

Reflecting on the digitalisation of the concert this year, Dr Sante says the presentation of the music from the Ninth Symphony through the virtual medium was exceptional.

Mr Warren Fernandez, editor-in-chief of Singapore Press Holdings’ English/Malay/Tamil Media Group and editor of The Straits Times, says: “This year we are marking the 175th anniversary of The Straits Times. So when I heard about the project, Beethoven Im Garten and the Ode To Joy which celebrates universal brotherhood and that sense of all-togetherness, it seemed to make sense.

“This being the 250th anniversary of Beethoven’s birth as well as me being a lover of the music, it all came together and therefore I was very happy to be a part of the project.”

The show is optimised for smartphones and tablets but can also be watched on computers.