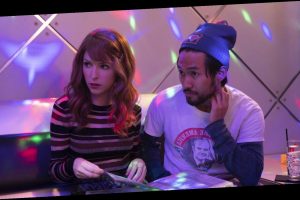 Anna Kendrick’s new romantic comedy series, Love Life, is available to watch (read: binge) on BBC iPlayer now – but is it any good?

As a single woman living in a pandemic, choosing what to watch on these dark, long autumn nights is proving tricky.

I had to stop halfway through Ratched because each episode literally left me feeling sick, stressed and hopeless in a world I’m already losing a lot of faith in.

And, although I enjoyed the first couple of episodes of Katherine Ryan’s The Duchess, a series that dissects the issues around 30-something women’s fertility rates isn’t what I need right now.

“I didn’t want kids, but do I feel differently now the choice is slipping away?”

The only shows I’ve allowed into my life over the last few weeks are tepid: the comforting new The Great British Bake Off series, familiar and funny Sex and The City reruns on Now TV, and the BBC’s delightful adaptation of David Nicholls’ Us.

But I’ve just added a brand new series to the “comforting, fun and reassuring” entertainment canon in this pandemic – and it’s taken me by surprise.

When a fellow single friend in lockdown recommended Love Life, starring Anna Kendrick, I was sceptical.

Don’t get me wrong, I love a romantic comedy. But after months of revaluating my own dating life during such a stressful time, I’m cautious about watching any neatly packaged fictional romances play out in front of my eyes right now. I’m trying, but struggling, not to let the pandemic exacerbate any feelings of fear and doubt over my single status. I don’t want a 90s Hugh Grant film to further complicate things.

However, I trusted my pal’s judgment. She has endured daily seven-minute-long voicenotes about bizarre dates, relationship regrets and bad men, after all. She knows the score.

After bingeing the first seven episodes of Love Life, what I’ve seen so far has actually left me feeling more reassured and seen than most other things I’ve watched this year.

The HBO 10-part series, which is now available to watch on BBC iPlayer, is billed as being a “journey from first love to last love, and how the people we’re with along the way make us into who we are when we finally end up with someone forever”.  Each episode explores a relationship, one-night stand and romantic encounter that leads Derby to her present life.

It actually sounds like exactly the kind of thing I don’t want to watch, right?

But it’s just so… realistic and relatable.

Then there’s the weirdo she has a one night stand with to regain a sense of control. And, in a flashback during Darby’s therapy session, we see how her first love affected the rest of her romantic life.

In an especially poignant episode, Darby reassesses the most important relationship in her life: the one she has with her mum. She also realises she married a man who is awful to her because she, wrongly, thinks marriage is the thing that will make her truly feel loveable.

Throughout all this, she navigates it with honest, judgment-free conversations with her best friends – just like we all do.

Of course, it’s not perfect (I’m fed up of these narratives being told by women who went to private school and can afford to live in a swish New York apartment on their own by the time they’re 27). It’s not groundbreaking, either. But it is everything I need.

We’ve all got stuff we’d rather forget. But life always goes on and gets better – pandemic or not.

Now TV October: best series and films, including The Undoing and The Invisible Man

I’ve still got a few episodes to go, but even if this turns out to be another ending tied up with a bow, I know that it wasn’t neatly done. Darby will have made one heck of a mess to get there; but it’s a beautiful mess – one that I’m still making in my own life and have no intention of tidying until I really want to, on my own terms.

END_OF_DOCUMENT_TOKEN_TO_BE_REPLACED

END_OF_DOCUMENT_TOKEN_TO_BE_REPLACED
We and our partners use cookies on this site to improve our service, perform analytics, personalize advertising, measure advertising performance, and remember website preferences.Ok