Home » Lifestyle » Another One! Nick Cannon Expecting Baby No. 3 With Brittany Bell, His 9th

Another One! Nick Cannon Expecting Baby No. 3 With Brittany Bell, His 9th 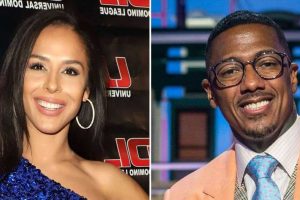 Another cutie for Nick Cannon! The actor and Brittany Bell are gearing up to expand their family once again.

“Time Stopped and This Happened,” Cannon, 41, wrote via Instagram on Wednesday, August 24, sharing footage from his maternity photo shoot with Bell, 34. He also added “Sunshine” and “SonRISE” hashtags to his post.

The Masked Singer host and Bell are already proud parents to son Golden, 5, and daughter Powerful, 19 months. The twosome’s newest arrival, their third together, will be Cannon’s confirmed ninth child.

In June, the All That alum revealed during an episode of the “Angela Yee’s Lip Service” podcast that he would be welcoming more children in 2022, saying, “The stork is on the way.”

Initially, the California native was hesitant to reveal details, claiming, “That would take all the fun out of it if I just gave you a number right now,” but eventually admitted that host Nischelle Turner “would be safe to bet on three [more children] in 2022.”

The Drumline star, who welcomed three little ones in 2021, then added that he hopes to break his previous record. “If you thought it was a lot of kids last year,” he quipped.

“He’s great,” Tiesi, 30, exclusively told Us Weekly in April of watching Cannon as a dad. “I hear him on the phone [with his kids]. I hear stories. I hear stuff about the kids, and I know him very well. [I’ve been able] to watch him parent and [see] his patience and … his insight and how he explains things. He is just a very nurturing, loving human. Very constructive.”

Cannon also shares twin boys, Zion Mixolydian and Zillion Heir, with Abby De La Rosa. The DJ previously announced in May that she is pregnant again, but did not reveal who the father is.

One month after welcoming the twins, Cannon welcomed son Zen with Alyssa Scott in July 2021. Tragically, the infant passed away in December of that year after being diagnosed with brain cancer. The actor also shares 11-year-old twins Monroe and Moroccan with ex-wife Mariah Carey.

Last month, the comedian revealed on an episode of “The Hottee Talk Show” podcast that Carey, 52, would always be one of his great loves. “I guess because I’m a true romantic, I’m a true believer in love and I allow the capsules of love to be where they lie,” he shared. “I’m not a timeline dude. I will never have a love like I had with Mariah.”

Cannon has been vocal about defending his decisions around fatherhood, revealing to Men’s Health in June that he is more “engaged throughout my children’s day more often than the average adult” might be.

“If I’m not physically in the same city with my kids, I’m talking to them before they go to school via FaceTime and stuff. And then when I am [in the same city, I’m] driving my kids to school, like, making sure I pick ’em up,” he explained. “I’m involved in everything from coaching to having guitar lessons with my daughter every week.”