Home » Lifestyle » Anti-Vaxxers Clash With Police In London As They Try To Storm Former BBC HQ, Presenters Tweet From Inside

Anti-Vaxxers Clash With Police In London As They Try To Storm Former BBC HQ, Presenters Tweet From Inside 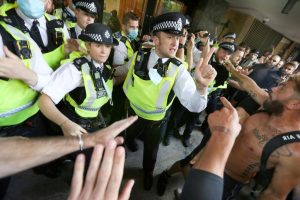 Anti-vaccine protesters have tried to storm a building at the Television Centre complex in west London.

Videos shared online show a mob, believed to be protesting against vaccine passports, vaccines for children and media bias, trying to enter the complex in White City and scuffling with police, some of whom use batons to quell demonstrators.

Footage online shows protestors gathering at nearby Shepherds Bush before marching on the BBC Studioworks building and trying to break a police line protecting the building. BBC Studioworks is a commercial arm of the corporation which has operated several studios at the site since 2017.

Protesters in videos shout “shame on you, shame on you”, with one giving a speech, accusing the BBC of “not giving out the right information” and claiming “they are coming for our f****** children.”

The confused demonstrators seemingly didn’t get the memo that the BBC largely vacated the premises eight years ago. Television Centre was the HQ of BBC Television until 2013 after which time production on most shows was moved to sites across the UK, including Broadcasting House in central London and Media City in Salford. Much of the complex is now residential apartments with ITV the main studio occupant for shows such as Good Morning Britain and Lorraine.

Loose Women co-host Charlene White thanked police and security who kept protesters at bay while the ITV program was on air this afternoon.

A Met Police spokesperson said: “We are aware of a group of demonstrators who, having set off from Shepherds Bush Green shortly after 13:00hrs, are now gathered outside commercial premises in Wood Lane, White City. There have been no arrests but officers are in attendance and will continue to monitor the situation.”

A BBC spokesperson said the corporation does not comment on security matters.

However, later in the day protesters also showed up at the BBC’s new HQ in central London. Presenter Samira Ahmed was one of a handful of journalists to tweet from the building. An hour later Ahmed tweeted that the crowd had dispersed.

The violent protest in Shepherds Bush has drawn derision from some in the media.

However, as many journalists will also acknowledge, this is an increasingly serious matter. The BBC is experiencing a growing number of verbal and physical attacks by anti-lockdown and anti-vaccine protesters. Two months ago BBC journalist Nicholas Watt was hounded and harassed by anti-lockdown protestors in London. Those same protestors have been emboldened by a government which has been keen to diminish the BBC in its own ways.