Home » Lifestyle » Are Andi Dorfman & Bennett Jordan Dating? She Responded To The Rumors

Are Andi Dorfman & Bennett Jordan Dating? She Responded To The Rumors 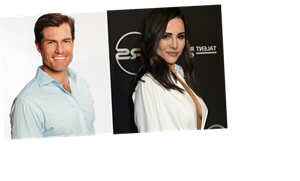 A new romance may be heating up in Bachelor Nation. After debuting a mystery man on Instagram, fans are wondering whether Andi Dorfman and Bennett Jordan are dating. And if they aren’t, then who exactly is Dorfman’s new guy? Well, Dorfman (sort of) gave some insight into her love life on Dec. 18, when she answered a fan’s Instagram comment about who this possible lover could be. "Did Kaitlyn [Bristowe] call you about Bennett?!" the fan joked, and Dorfman seemingly shut down that rumor when she replied, "who?" So much for that!

In my opinion, it doesn’t seem likely Jordan is Dorfman’s mystery man. He’s been posting photos of himself hanging out around New York City the whole time Dorfman’s been on vacation in Cabo San Lucas, so it seems he’s out of the running. But the manhunt to find out who Dorfman has been maybe-dating is still going strong. The mystery dates back to Dec. 16, when The Bachelorette alum posted a steamy Instagram pic of herself sitting in between an unidentified man’s legs on the beach. Dorfman showed off her backside in the picture while wearing nothing but a purple swimsuit and baseball cap which read, "out of office." The snap appeared to be taken by the mystery man sitting behind her, and when fans kept asking the Dorfman who he was, she deleted the photo and shared a new version with the man cropped out. Dorfman captioned the new pic, "Now I look topless lol #outofoffice#cropped 🤦🏻‍♀️🤣😳."

However, she didn’t do her best at avoiding the drama. When Dorfman uploaded a new snap of her sitting on the balcony of her hotel room on Dec. 18, eagle-eyed fans quickly noticed there was a reflection of a man standing up in the background. And they couldn’t help but notice his legs looked vaguely similar to the guy from the last photo.

"The legs are back!" one person hilariously said in the comments section, and another added, "Whose legs [are] in the reflection? You are having fun with us Andi!" But instead of revealing who he was, Dorfman responded to a different question about her messy bed in the background. “Yes, girl live your bear [sic] life!” one of her followers joked about the "torn-up" sheets, and Dorfman replied, "@ashleyseman make my bed after a snooze …. noooopppe lol."

It looks like Dorfman won’t reveal who her mystery guy is anytime soon. Like most people, I guess fans will just have to wait until the two are ready to become Instagram official.

END_OF_DOCUMENT_TOKEN_TO_BE_REPLACED

END_OF_DOCUMENT_TOKEN_TO_BE_REPLACED
We and our partners use cookies on this site to improve our service, perform analytics, personalize advertising, measure advertising performance, and remember website preferences.Ok