Home » Lifestyle » Are we all ‘strangely featherless birds’? It’s not as wild as it sounds

Are we all ‘strangely featherless birds’? It’s not as wild as it sounds

Despite our species’ much-publicised ecological destructiveness and social divisiveness, we human beings are always, in fact, seeking to make connections with our own kind and with other species of animals and plant life too, far more than we are searching for isolation, or even solitude.

Sociobiologist E.O. Wilson touches on this overarching behavioural need with his theory of biophilia, whose fundamental idea is the attraction of life to life. In exploring the biophilic imperative, scientists, and other practitioners of cultural observation in the climate-change era, are on the lookout for inbuilt patterns that might allow us to further understand the connections we wish, indeed need, to make in order to bring the life-world we depend upon back into balance. 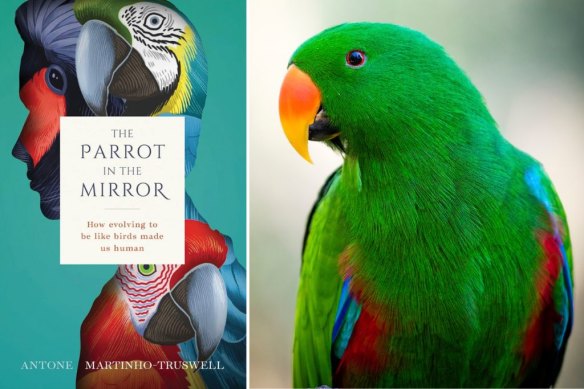 In the 18th century, Carl Linnaeus, the Swedish naturalist, designed an overarching nomenclature of classification for all life on earth. In the Linnaean system the abundance of which we are just a part was thus initially broken down into hierarchical units of kingdom, class, order, genera and species, and the practical genius of his design has allowed the modern biological sciences to flourish as they undoubtedly have.

But science at its best is a revisionary discipline, and Linnaeus’ system is always being updated, in significant ways too, as the relatively recent creation of the entirely new categorical kingdom of fungi demonstrates.

Behavioural ecologist Antone Martinho-Truswell’s debut book, The Parrot In The Mirror: How Evolving To Be Like Birds Made Us Human, focuses on the behavioural traits shared by humans and birds, a fascinating evolutionary niche that the Linnaean system, despite its focus on shared characteristics, does not fully explicate, or even imply. Martinho-Truswell, a graduate of Oxford and Harvard and now dean of Graduate House at St Paul’s College in Sydney, describes birds, and most specifically parrots, as “nature’s other attempt at extraordinary intelligence”.

At the core of this idea is the stimulating concept of convergent evolution, whereby natural phenomena need not emerge from a common ancestor, nor indeed in a linear evolutionary narrative, but in unrelated and divergent contexts. Thus Martinho-Truswell explains how despite the fact that parrots originated millions of years before human beings, the categories of behaviour we share make humans a strong candidate to be described as a “strangely featherless bird”. 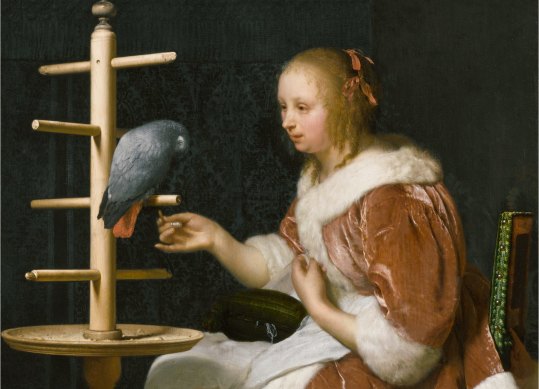 Detail from Frans van Mieris’ A Young Woman Feeding a Parrot, 1663. The categories of behaviour we share make us humans a strong candidate to be described as a “strangely featherless bird”. Credit:NGA

It’s a fascinating, indeed almost surreal topic, and the book is full of facts and observations about how birds, and we, have evolved in similarly exceptional ways, birds through their capacity to fly (Martinho-Truswell calls them “evolutionary superheroes”) and us through our outsized brains. He concludes that “our big brains led us ultimately to achieve bird’s flight, their flight led them ultimately to share our big brains.”

Like so many contemporary scientists, Martinho-Truswell wrestles with the presumptions of methodological objectivity inherited through his discipline, often ascribing to the evolutionary process an intentionality, even an emotionality, as a way of engaging his readers, while at other times embracing the less charismatic but decidedly generative agency of accident and chance.

Working in an undoubtedly transitional era for science studies in general, it’s as if Martinho-Truswell has leapt sideways across the vertical Linnaean landscape to find lateral relationships that might otherwise, in the Western Enlightenment model, seem too unlikely.

He is far from insouciant, though, and his structural evidence is clear. Most birds, for instance, are diurnal like us, and thus vision and colour-focused, which means, to put it bluntly, that we’re in each other’s faces a lot. We also both live a very long time compared with most other animals, and when we are born we require a protracted period of altricial care from our parents before we become anything like independent.

This unusual helplessness of bird and human babies seems to lie at the heart of the connection The Parrot in the Mirror is exploring, encouraging as it does techniques of family interdependence, vocal communication, and increased environmental influence on the development of intelligence.

Such factors all start to make us daylit, largely monogamous and song-loving humans look far more birdish than mammal-like. And when Martinho-Truswell unrolls pithy anecdotes of our comparable creativity – crows in Japan using pedestrian lights to allow cars to crack walnut shells, African grey parrots asking questions in English about their appearance and then understanding the answer at a depth beyond mimicry, cockatoos not only using tools but making them from scratch – the sideways journey we have made across the Linnaean paradigm seems not only entertaining but purposeful in the way it has us thinking again about interspecies connections we otherwise might not be seeing.

The Parrot In The Mirror by Antone Martinho-Truswell is published by Oxford University Press, $41.95.

Gregory Day’s most recent book, Words Are Eagles: Selected Writings on the Nature & Language of Place, is published by Upswell.