Home » Lifestyle » Ariana Grande Made It Really Clear That No, She’s Not Dating Ricky Alvarez Again

Ariana Grande Made It Really Clear That No, She’s Not Dating Ricky Alvarez Again

Thought she’d end up with Sean, but he wasn’t a match. Wrote some songs about Ricky — and ever since she commented on one of his recent Instagram posts, fans have thought they’re getting back together. Well, as it turns out, Ariana Grande isn’t dating her ex-boyfriend Ricky Alvarez, according to the star herself and E! News. And the singer made sure to shut down any speculation real fast. Sorry to disappoint if you were re-shipping them, Arianators.

First, though, let’s rewind for a quick minute. Back in June 2015, rumors started to surface that Grande was dating Alvarez, who one of her back-up dancers at the time. They kept their relationship pretty low-key for more than a year, but ended up parting ways around July 2016.

Flash-forward to November 2018, and Alvarez’s name had made it back into the headlines again, courtesy of a little song by Grande called, "Thank U, Next." Perhaps you’ve heard of it? No? You haven’t? Are you sure? Haha, don’t be silly. Of *course* you’ve heard of it by now. It was and is, as Grande predicted, "a smash."

If by some modern miracle you haven’t heard it, though, you should know that Grande drops several of her ex-boyfriends’ names in the lyrics, including Big Sean, Pete Davidson, Mac Miller, and — yep, Alvarez. The track inspired a pretty hilarious initial exchange between Grande and her former back-up dancer (more on that later), and on Dec. 10, the singer made a comment on Alvarez’s Instagram that sent fans into a frenzy.

The photo in question was of a bleach-blonde Alvarez wearing a mustard-colored sweater. "ready for it," he captioned the pic. Not long after, Grande dropped in to say, "These colors are sick," and thus their romance rumors were reborn.

Several eagle-eyed fans took note of Grande’s comment, and immediately started asking the two stars if that was a sign that they were getting back together. Sadly for their shippers, Grande quickly replied, "We’re friends everyone take a big ol breather," as E! News reported. 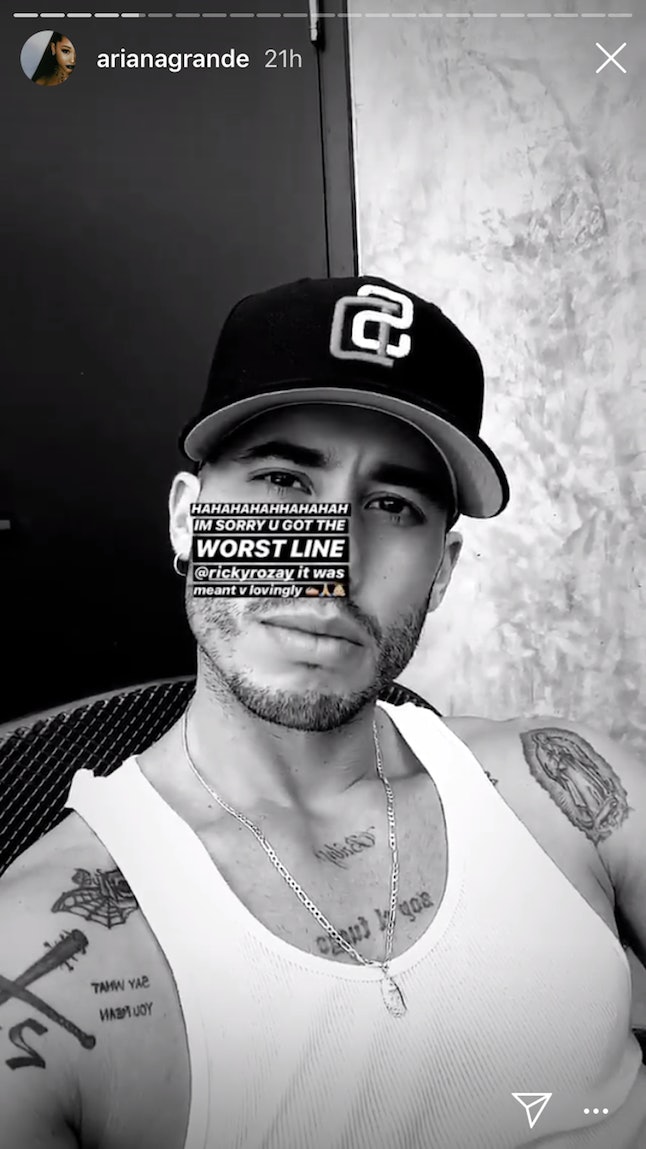 Fans kind of, sort of, maybe should have seen that response coming, though. First of all, as was briefly mentioned earlier, the lyrics about Alvarez in "Thank U, Next" — "Wrote some songs about Ricky / Now I look back and laugh" — caused him to post a hilarious reaction to the track on Instagram. Once Grande caught wind, she re-posted the clip on her own Instagram Story with the caption, "HAHAHAHAHAHAHAHA. I’m sorry u got the worst line it was meant v lovingly."

Second of all, in the music video for "Thank U, Next," viewers get a quick glimpse of Grande’s Mean Girls-esque "Burn Book," which has several pages dedicated to a few of her ex-boyfriends. On Alvarez’s page, Grande glued a sweet pic of their time together with the words, "Ricky" (inside a heart), "great dancer," "good times man," and "friends forever." See that? "Friends."

So, yeah. Everyone take a big ol’ breather, as per Grande’s request. While it definitely seems like the exes are on super friendly terms — "friends forever," in fact — they probably won’t be getting back together any time soon.