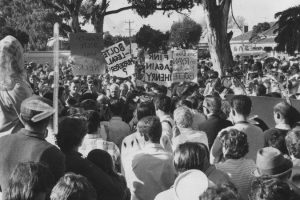 Ronald Joseph Ryan, convicted of murder and hanged at Pentridge on February 3, 1967, was the last of about 2140 men, women and children to be executed in Australia or its territories, since October 1629.

Not all executions took place in, or outside, Australian prisons. In discussing judicial murder, the product of transplanted European laws, we should not forget the many, probably thousands of extra-judicial killings of First Nations people which have taken place, often with official approval. 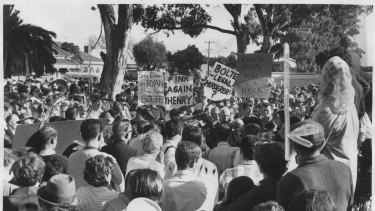 A crowd demonstrates against the hanging of Ronald Ryan.Credit:Fairfax

As secretary of the Victorian Anti-Hanging Committee (later Council) from 1962 to 1975, I led the successful campaign to prevent the execution of Robert Peters Tait in 1962 but failed to stop Henry Bolte’s ruthless determination to hang Ryan. I edited and partly wrote The Penalty Is Death, published by Sun Books in 1968, in the aftermath of Ryan’s execution.

The second edition, published by Scribe, commemorates Queensland’s abolition of capital punishment for all crimes on July 31, 1922. It was the first jurisdiction in the then British Empire to do so.

Queensland’s pioneering role was the work of three remarkable men, all in danger of being forgotten down south: Thomas John Ryan, Edward Granville Theodore and John Mullan.

T. J. Ryan (1876-1921), born in Port Fairy to Irish immigrants, was educated in Melbourne, became a teacher and lawyer and then moved to Queensland, serving as premier and attorney-general of Queensland from 1915. His bill to abolish capital punishment (1916) was blocked by the non-elected Legislative Council.

E. G. Theodore (1884-1950), known as “Red Ted”, was born in Adelaide to a Romanian father (Teodorescu) and an Anglo-Irish mother. Having succeeded Ryan as premier, he secured abolition of both the Legislative Council and capital punishment in 1922.

John Mullan (1871-1941), born in Dublin, was a railway and postal worker, self-educated, a senator from Queensland, then a state MP and attorney-general for a record period with stints from 1920 to 1929 and 1932 to 1940. He introduced the legislation to abolish the death penalty with a powerful Second Reading speech.

What is the relevance of debating the death penalty in 2022? Capital punishment is a central metaphor for the problems of state power, the fallibility of human judgment and the danger of making decisions that are irreversible.

The World Coalition against the Death Penalty reported the number of recorded executions internationally in 2021 at 2397, with at least 2000 in China. The total figure is probably far higher because China keeps details of its executions a state secret.

Egypt ranks third among executing states, and in the decade 2011-21 2182 people were sentenced to death, including children, mostly for political offences by the Muslim Brotherhood.

The Penalty Is Death is, essentially, a collection of the best writing from world literature setting out the reasons why the death penalty should be rejected in all places and at all times. Among the writing are works by Cesare Beccaria, Charles Dickens and Clarence Darrow. George Orwell’s 1931 essay on a hanging he witnessed in Burma, perhaps the most compelling piece of writing on the death penalty, also appears.

The world and the times have changed since 1968. In order to place these classic writings in our contemporary world, the commentary for each work has been updated and changed. Three brilliant forewords by leading jurist Michael Kirby, barrister Julian McMahon and Richard Bourke, the Australian barrister who is director of the Louisiana Capital Assistance Centre, place the works in the context of the ongoing struggle to advance the cause of abolition by Australians and those we work with around the world.

In On Crimes and Punishments, published in 1764, Beccaria, an economist from Milan, argued for the abolition of the death penalty with a classic simplicity, that there is no demonstrable correlation between the severity of punishment and the crime rate: all punishment deters, but there is no statistical evidence that execution or torture deters uniquely. The aims of punishment, he insisted, are reformation and deterrence, and certainty of apprehension and conviction are the major determinants of the crime rate. The appropriate penalty is the lowest penalty consistent with public safety.

Although the number of abolitionist countries and those maintaining long-term moratoria on the death penalty continues to grow, much more than half of the world’s population live in places where they are at risk of the death penalty. Australia is geographically and politically well-placed to exert our influence and provide our assistance to progress the cause of abolition.

One important aspect of the new commentary is the coverage of the large-scale use of capital punishment by the Australian military against Indigenous Papua New Guineans during the latter half of World War II. In 1968, only the slightest knowledge existed of these events and the briefest of mentions appeared in the first edition.

Subsequent research in files – albeit mutilated ones – at the Australian National Archives (ANA) has revealed much more about this shameful episode in our military history.

In Papua New Guinea in 1943 and 1944 the AIF tried, convicted and hanged about 150 Indigenous people in remote areas, mostly for murder but often for collaboration with Japanese forces. Most of those hanged had been subject to domination by different colonial powers before the Australian military and could hardly be blamed for carrying out instructions of those who, for the moment, had them at the point of their guns.

Extraordinarily, the military authorities kept knowledge of these events from the Australian government. It was only in April 1945 that the prime minister, John Curtin, found out and the cabinet ordered the executions stopped.

Even then, the General Officer Commanding (GOC), Lieutenant-General V.A.H. (later Sir Vernon) Sturdee, hesitated and sought alternative legal advice before reluctantly complying with the instructions of the government of the day.

These military executions remain, because of the state of the records, shrouded in mystery. Neither do we know why so many of the records are absent and incomplete. We do know, however, that the AIF were responsible for about 150 executions over about two years, some 35 more executions than occurred in Australia between 1901 and 1967.

We live in deeply troubling times. It is easy to understand why people in many countries are gripped by insecurity. The ready access to lethal weapons and mood-changing drugs and the risk of attack, from internal or imported terrorism, are horrors seen every day on television and the internet. As a defensive reaction, many citizens would like to see the return of retributive punishments.

We need to think deeply about how we define our humanity. In the final analysis, do we make judgments coolly and calmly on the basis of evidence that is capable of being weighed and objectively analysed? Or is it the case that, in dealing with human nature, objective analysis is useless and we are forced into terra incognita and must decide blindly, on the basis of instinct or gut reaction?

We stand, I hope, against darkness, against obscurantism, against instinct, against pessimism about society and the capacity that individuals have for moral regeneration.

Campaigners for abolition have to be prepared to argue for the tough cases, repulsive as they are: Saddam Hussein, Osama bin Laden, Timothy McVeigh, Amrozi. The moral high ground does not allow campaigners to be selective.

If a man does no longer act like a man, the community must refrain from following him … Any individual who commits an act of violence against another individual is degrading mankind. If we want to safeguard the concept of human beings now being threatened, we must resist the temptation of retributive anger.

Can man, that imperfect being, be expected to render perfect justice?

Nguyen Tuong Van, aged 25, an Australian citizen of Vietnamese origin, was hanged in Singapore in December 2005 for carrying drugs for his brother from Cambodia to Australia and being caught in transit.

Under Singapore’s mandatory death penalty, mitigating circumstances were irrelevant. It would be impossible to characterise Van Nguyen as the criminal of the year, or the century, but his penalty would have been no greater if he had been.

Execution is the ultimate demonstration of state power; there are no chance factors and the victim becomes a passive object, even before he or she dies. In some jurisdictions, cost is a major factor: execution is far cheaper than lifelong imprisonment.

One of the sickening aspects of execution for drug offences is that only mules are caught. Those who control the drug syndicates just read about the executions on Facebook. 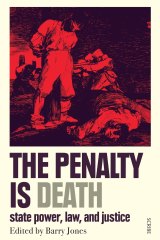 Scribe’s new edition of The Penalty Is Death, compiled and edited by Barry Jones.Credit:

If the senseless executions of Myuran Sukumaran and Andrew Chan for drug offences in 2015 taught us anything, it is this: Australia must be much more active in advocating abolition of the death penalty internationally. This is not merely to protect and preserve its own nationals, but as part of a campaign with universal application, without picking and choosing, and with the moral force that earlier generations worked with to end slavery, liberate women, eliminate torture and punishments for heresy or witchcraft.

This second edition of The Penalty Is Death brings new generations of activists, students and general readers access to the most important writings on capital punishment across history. And it brings important, albeit incomplete, knowledge of an aspect of Australian conduct in war that should not be forgotten.

The centenary of Queensland’s abolition of capital punishment will be celebrated at Parliament House, Brisbane, on Monday, August 1. As the culmination of the day’s celebrations, journalist and broadcaster Kerry O’Brien will officially launch the new edition of The Penalty Is Death (Scribe, $35).