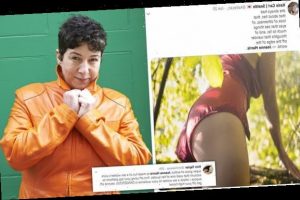 Sweet revenge! Chocolat author Joanne Harris rages after a sex worker ‘steals’ one of her quotes to promote her services – but the adult industry hits back by posting MORE racy memes using her words

British author Joanne Harris has upset sex workers after she objected to a woman using a quote from one of her books alongside an ‘out-of-context’ photograph.

Harris, who has written bestsellers including Chocolat and Blackberry Wine, pointed out to the woman that the words were her creation and therefore her copyright.

However, the Twitter exchange, which saw the original image promptly deleted, has now sparked a backlash from other sex workers who are busy creating their own tweets using Harris’ work.

The writer, 55, detailed her anger at her work being used without consent in a thread on Twitter last night.  However, sex workers who saw it claim she targeted their community but had ignored other people doing the same thing. 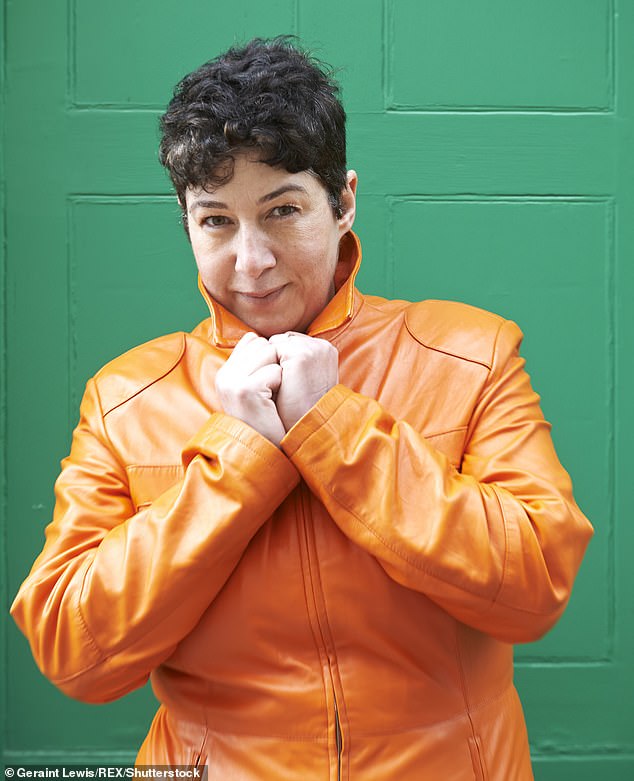 British author Joanne Harris has sparked a storm on Twitter after she asked a sex worker  to remove a quote of hers from an ‘out-of-context’ image – sex workers are now protesting against Harris by posting their own risque memes, using the author’s words 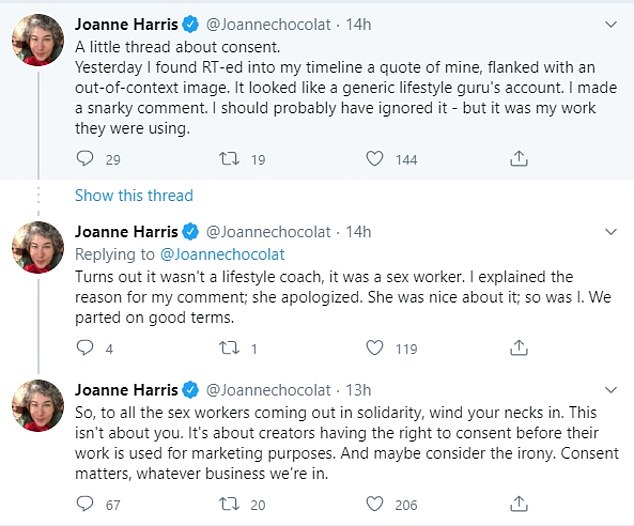 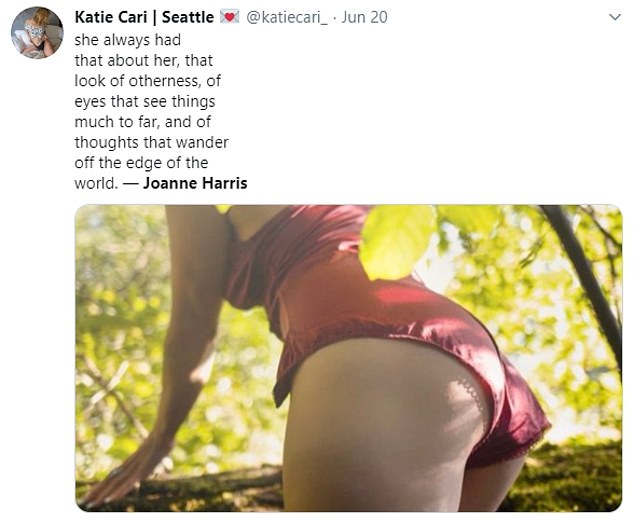 It wasn’t long before, far from ‘winding their necks in’, sex workers began posting more quotes of Harris’ work (and some fictional quotes), alongside intimate images – with dozens now on Twitter

Harris explained to her 72,000 followers, that she might have ignored the issue but had been irked by the misuse, writing: ‘A little thread about consent. Yesterday I found RT-ed into my timeline a quote of mine, flanked with an out-of-context image. It looked like a generic lifestyle guru’s account.

‘I made a snarky comment. I should probably have ignored it – but it was my work they were using.’

She continued: ‘Turns out it wasn’t a lifestyle coach, it was a sex worker. I explained the reason for my comment; she apologized. She was nice about it; so was I. We parted on good terms.’

Addressing those who’d criticised her for the ‘snarky’ comment, she wrote: ‘So, to all the sex workers coming out in solidarity, wind your necks in. This isn’t about you. 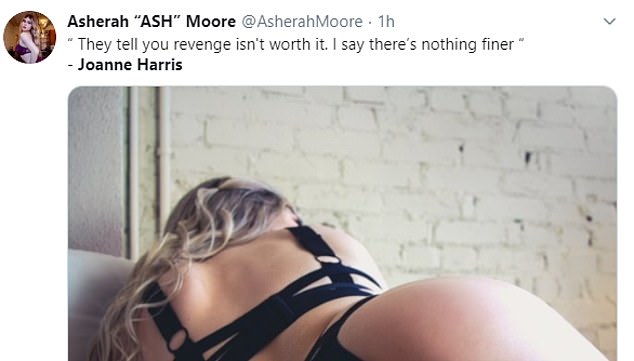 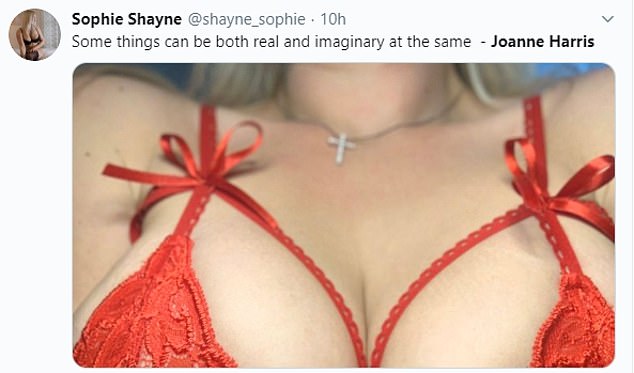 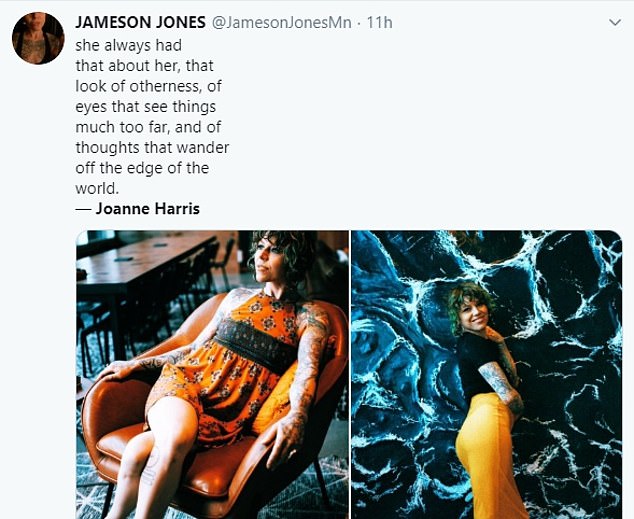 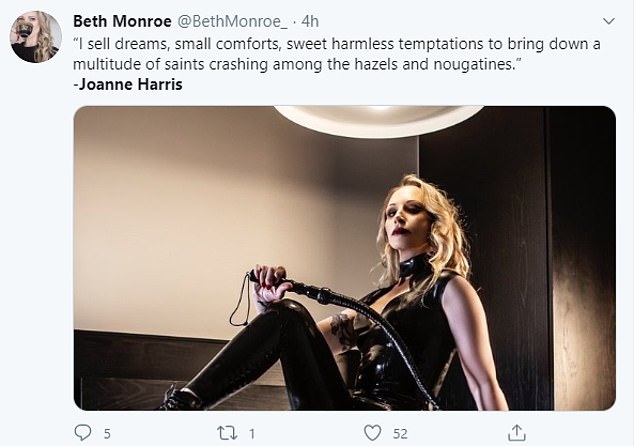 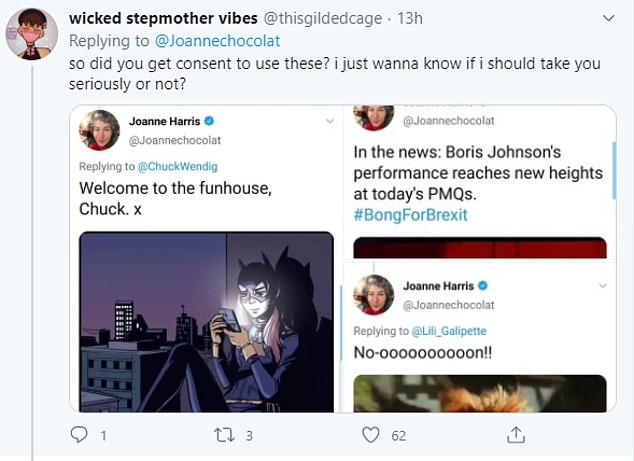 ‘It’s about creators having the right to consent before their work is used for marketing purposes. And maybe consider the irony. Consent matters, whatever business we’re in.’

In the hours since, a flurry of risque images have since popped up on Twitter, with quotes of Harris work, and some other lines clearly not written by the author, also attributed to her name.

One person, @erinisaway, commented: ‘Super gross of author Joanne Harris to make fun of a sex worker’s work account that used one of her quotes.

‘First off using your big platform to expose/attack a sex worker to your audience is DANGEROUS. second off, get off your high horse!’

Some pointed out that Harris herself has re-posted gifs of other people’s work, saying: ‘Oh come off, you never used a reaction gif? Quoted a movie? I know everyone has reply guys but this is hilarious.’

Others defended Harris’ right to claim copyright on her own work.  @Hannah_c_casey  wrote: ‘I’m not sure anyone else would ignore their work being ripped off and flanked next to someone’s a***. Doesn’t seem unreasonable to highlight it.’

Harris first shot to fame in the late nineties, with her most famous book, Chocolat, which was adapted into a film in 2000, starring Dame Judi Dench and Johnny Depp.