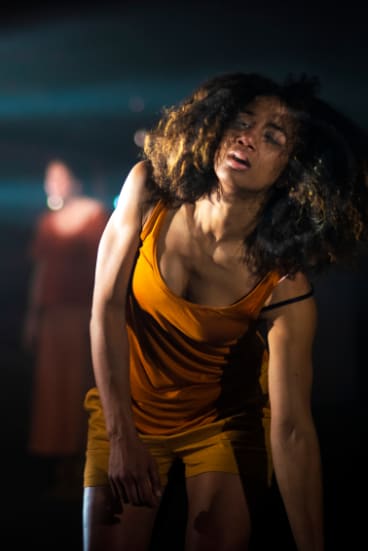 Winner of the 2016 Victorian Premier’s Prize for Drama, Mary Anne Butler’s Broken is a slippery and unsettling three-hander that snakes between the beginning and end of life. It’s a love triangle (or at least we think it is) tenuously suggested through fragments of a memory play, one that swirls with shadowy psychodrama, ambiguous symbolism and kinetic stage poetry.

Butler leaves much room for interpretation and the affective labyrinth she creates contains chambers of horrors.

The piece begins with a staccato invocation of a motor vehicle accident in the outback which leaves a young woman trapped and mortally wounded. In a piece of intensely dramatic juxtaposition, her pain is transmuted into the relived agonies of a mother bearing a stillborn child.

The wavering, sometimes competing realities draw on the private anguish of a husband (Lyall Brooks) and wife (Sophie Ross), and the insinuation of an affair (or the fantasy of one) between the husband and the woman whose life he saves (Naomi Rukavina).

Susie Dee’s production weaves an intense web of feeling, though the vigour is almost all in the dialogue. The mise-en-scene – a bare stage, twilit and dusty, with shafts of light puncturing the space through a ramshackle timber wall – creates an eerie atmosphere, and the lighting design is endlessly subtle, but the stage picture is too static for such a dynamic dramatic text.

Ross, Rukavina and Brooks are all fine actors, yet they are left floating alone in the half-dark much of the time. It’s not ideal. What you can see of the interaction between them is recessive, barely there, and the filigree of physical theatre in the piece doesn’t feel disciplined enough to stick.

If the visual aspect of the production can be dull, it’s as verbally secure as a well-produced radio play.

Broken is a challenging new work that offers a lot of creative freedom. It’s great to see it staged, even if there’s an argument for closing your eyes and letting the language work its magic.