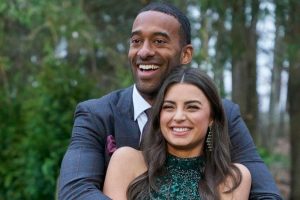 “The Bachelor” star Matt James gave an update on his ongoing relationship with Rachael Kirkconnell, the contestant he gave his final rose to in the season 25 finale.

The two had called it quits after filming for the season concluded due to photos of the Kirkconnell attending an “Old South” antebellum plantation-themed party in 2018 that came to light. The now 24-year-old had also liked a social media post that showed a Confederate flag.

When they appeared on the “After the Final Rose” special, the pair were broken up. Since then, however, there had been rumors that they had gotten back together and James, 29, confirmed they were giving their relationship another shot in a Wall Street Journal interview earlier this month.

Now, speaking on the “Pomp” podcast, James — the franchise’s first Black male lead — said things with Kirkconnell have “been great” so far and revealed he decided he wanted to rekindle their romance after receiving an ultimatum.

“She was like, ‘If you’re going to make this work, let’s do it. But, if you’re not going to make it work, I’m going to let you do your own thing,'” James recalled. “That’s really all I needed. It was an ultimatum that I needed.”