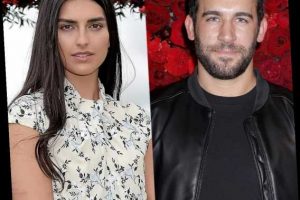 The Bachelorette and Bachelor in Paradise alum proposed to his girlfriend, model Saffron Vadher. On Nov. 8, Peth posted an Instagram video of Vadher showing off her sparkling new ring. He also tweeted, "She said yes!!!"

While neither have said anything further about their engagement, the well-wishes have poured in for the reality star and British Vogue cover girl, including from Peth's fellow Bachelorette and Bachelor in Paradise contestant, Wells Adams.

"This makes me very happy," Adams wrote of the news on his Instagram Story. "Well done @pethderek. Welcome to the family @saffron!!" Adams' fiancée, Sarah Hyland, echoed the excitement, writing on her Instagram Story, "These cuties are gonna get MARRIED!!!!!!!"

Peth's personal news comes more than two years after he and Taylor Nolan—who he met on Bachelor in Paradise—broke off their engagement in June 2018.

As they confirmed in an exclusive joint statement to E! News, "It is with much sadness that we have decided to end our engagement."

"We put everything we could into our relationship and are heartbroken to go forward separately," the statement continued, "but we know this is the best decision for the both of us. We will still be present in each other's lives with support, admiration and respect for each other."

While it's unclear when his romance with Vadher began, Peth made their relationship Instagram official in June when he shared a photo of them together for the first time.

That month, Vadher also shared snapshots of their life together in Iowa while isolating during the coronavirus pandemic.

The First Photos From the Gossip Girl Set Are Here

Chris Hemsworth Didn't Allow His Trainer to Join The Bachelor

Now, the happy couple is headed for the aisle. But, first—some music. "What is the best love song?" Peth tweeted on Sunday, ahead of his proposal. "Making a mix CD for
@saffronavadher. Wait is it mix or mixed?"