Renae Lawrence set foot on Australian soil on Thursday morning for the first time in more than 13 years after she was freed from her Balinese prison.

The convicted member of the Bali Nine was surrounded by a media scrum after she landed with family at Brisbane Airport before dawn.

The convicted Bali Nine drug mule walked free from Bangli prison on Wednesday after more than 13 years behind bars for her role in the plan to smuggle more than eight kilograms of heroin from Indonesia to Australia.

She touched down in Brisbane on a Virgin flight about 4.45am local time, 20 minutes ahead of the scheduled arrival, before hopping on a terminal transfer bus for the second leg of her return to her home state of NSW.

Ms Lawrence made one brief mumbled comment as she tried to weave her way through the media scrum, believed to be along the lines of thanking the government.

Fellow passengers had no idea Ms Lawrence had been on the same flight as them and when asked by waiting media at the arrivals gate about her, the common response was a look of confusion followed by "Who?". 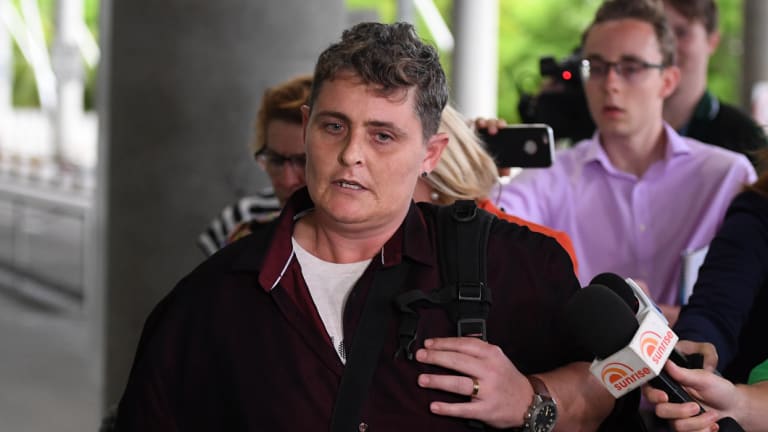 Passengers said they had not noticed extra security at Denpasar Airport and were dazzled by camera flashes and TV camera lights as they walked through the arrivals gate at Brisbane.

Earlier, she spent the first precious hours of her life outside jail with her close family, including mother Beverley Waterman and step-brother Allan Waterman.

In a quiet room in Bali’s Ngurah Rai international airport – hours before she was scheduled to board flights back to Brisbane, then on to Newcastle – the family gathered to spend precious moments with her.

Nursing a cigarette and speaking softly, the just-released former jailbird looked shocked at her new-found freedom.

Asked by Fairfax Media about her time in jail, and how it felt to be free, Lawrence apologised and in her first public comments since her release said “I’m sure, I’m positive” that she was not yet ready to speak about her experience.

Mrs Waterman, her devoted mother, chimed in that “it always gets misconstrued” when the family spoke to the media.

Five members of the Bali Nine are serving life sentences, with little prospect of release in the short-term.

Matthew Norman and Si Yi Chen are both still in Bali's notorious Kerobokan prison, where Lawrence was initially held. Scott Rush is in Bali's Karangasem prison, while Michael Czugaj and Martin Stephens are being held in a jail on the island of Java.

Bali Nine ring leaders Andrew Chan and Myuran Sukumaran were both executed on April 29, 2015, while Tan Duc Thanh Nguyen died of cancer in June this year.