Vast photographic glass curtains referencing ironbarks, strangler figs and Gymea lilies have been unveiled at Barangaroo – the largest permanent public artwork commissioned at Barangaroo since the formation of an art fund for the site.

The towering works of beauty comprise translucent images of native flora baked into soaring vertical panels of glass at the buildings' entrances and exits, creating what Hornig describes as a ''botanical discovery route''. 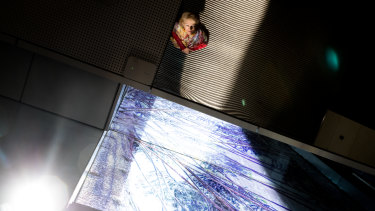 The project has been funded from Lendlease's contribution of $20 million to public art on the site – a condition of its development application.

The remaining money will be allocated to four permanent projects and other temporary artworks at the Renzo Piano-designed residential towers, the Barangaroo South waterfront and Hickson Park now under construction behind Crown Casino.

One idea is for a permanent artwork that tells the story of The Hungry Mile – a stretch of former docklands on Hickson Rd from Napoleon St to the Walsh Bay Tunnel – important to Sydney’s history during the Great Depression.

With in-kind developer contributions, this is one of the largest pol of money for public artworks in Sydney.

Infrastructure NSW, which has taken over the Barangaroo Delivery Authority, has itself commissioned two arts projects under the Barangaroo Public Art and Culture Plan including SKATE at the Cutaway, an underground skateboard theatrical experience.

A spokesperson said Infrastructure NSW was currently reviewing artist briefs for future arts projects under the plan which remained in place until the completion of Barangaroo. 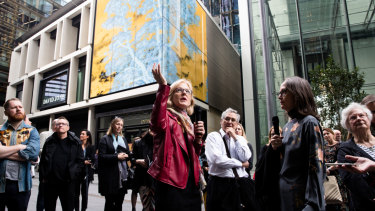 The ghostly outline of an ironbark against a taxi yellow sky occupies an entire walkway corner at Barangaroo South.Credit:Janie Barrett

Of the four upcoming projects at Barangaroo South, Lendlease is planning to commission two major art projects the next year with the other two probably needing longer planning time.

''We need more time to understand what is being built outside of our site and how to integrate a Hungry Mile project within the edge of Hickson Rd and still being designed,'' said Annie Tennant, the company's general manager of Sustainability and Culture at Barangaroo South.

A seven-storey high wall of shells, a collaboration by La Perouse-based indigenous artist Esme Timbery and Jonathan Jones, was installed in 2015.

A floating cloud installation by contemporary artist Tomás Saraceno above a new waterfront park was abandoned in 2018.

For her site-specific work, Sabine Hornig said she had tried to imagine the natural landscape of Barangaroo before the towers existed.

A glorious Gymea lily against a backdrop of pristine harbour graces a soaring tower facade. The ghostly outline of an ironbark against a taxi yellow sky occupies an entire walkway corner.

Hornig said her inspiration for the work came when she was given a tour of Royal Botanic Gardens by Kikuyalanii woman Henrietta Baird who impressed on her the importance of plants to Indigenous Australians.

END_OF_DOCUMENT_TOKEN_TO_BE_REPLACED

END_OF_DOCUMENT_TOKEN_TO_BE_REPLACED
We and our partners use cookies on this site to improve our service, perform analytics, personalize advertising, measure advertising performance, and remember website preferences.Ok