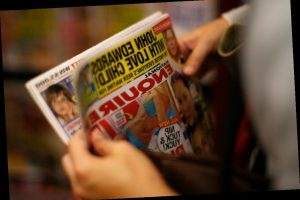 BBC Storyville has acquired U.K. rights to Scandalous, the documentary about U.S. tabloid the National Enquirer.

Storyville, which struck the deal with AGC International, will broadcast the film on BBC Four this month.

The documentary, from director Mark Landsman, charts the publication’s impact on journalism, business, culture and politics. After purchasing the New York Enquirer in the 1950s with funds from his godfather (and reputed mob boss) Frank Costello, Generoso Pope, Jr. rebranded and renamed the publication the National Enquirer. Scandalous explores how Pope, Jr. turned the racing and sporting newspaper into a mass market tabloid stuffed with scandal, medical oddities, conspiracy theories, celebrity gossip and paparazzi photos of the rich and famous, from Elizabeth Taylor, Michael Jackson and Princess Diana to Hillary Clinton and Donald Trump.

The film dissects why the paper thrived, the impact of its sharp turn into partisan politics, and why the tabloid began catching and killing stories to protect powerful men, and publishing propaganda profiles of foreign despots. Talking heads include former staff and other media observers.

The origin story was co-produced by CNN Films, AGC Studios, and This Is Just A Test, and was released theatrically in the U.S. by Magnolia, with CNN retaining North American broadcast rights, and AGC International overseeing international distribution.

Mandy Chang, Commissioning Editor, BBC Storyville said: “We are thrilled to be showing this riveting and hugely entertaining feature documentary as part of our next Storyville run. Director Mark Landsman brings a witty and insightful approach as he tracks the inside story of the infamous American tabloid – slyly commentating on how the confluence of politics, celebrity dirt, crime and culture fed a nation’s obsessive hunger.”

The deal was negotiated by AGC SVP Callum Grant, and Lauren Wilson on behalf of AGC, and by the BBC Storyville team.

END_OF_DOCUMENT_TOKEN_TO_BE_REPLACED

END_OF_DOCUMENT_TOKEN_TO_BE_REPLACED
We and our partners use cookies on this site to improve our service, perform analytics, personalize advertising, measure advertising performance, and remember website preferences.Ok